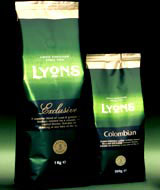 Lyons is to relaunch Coffees From Around The World in May, and its Original Range in June, with packaging design by Parker Williams.

The consultancy won the work following an initial six-way credentials pitch. It went on to win a two-way paid creative pitch against an undisclosed rival.

The project represents a five-figure fee.

As part of the relaunch, a new strapline, ‘Coffee perfection since 1904’, will be applied to the Original Range packaging.

Parker Williams creative director Tamara Williams says, “We were asked to highlight Lyons as a brand, to update and give it a fresher look but retain its historical elements to ensure an approachable feel.”

The phased-in launch began two weeks ago. In addition, a new dark roast brand, After Dark, has been created. Other blends have been renamed and new pack sizes have been launched.

Beck’s to the future

H&A gets under The Boardwalk