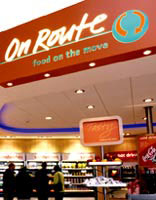 Lucid has created the brand identity, interiors and graphics for motorway services operator RoadChef’s latest catering venture, On Route, which launches this week.

The On Route interiors are designed to “reinvent the standard servery”, says Lucid creative director Nick Butcher. Traditional counters and chiller cabinets have been repositioned to reduce queuing and create space, and signage has been introduced to clarify product offerings.

A “hot to go” sandwich counter is designed to provide motorists with hot takeaway snacks, such as baguettes and pasties. “The introduction of this ‘grab and go’ approach, whereby motorists can take a hot snack to their car, extends the existing canteen-style product offering,” says Butcher.

“We aim to bring the motorway service station in line with urban food outlets with a contemporary ‘feel’ such as Pret A Manger,” he adds. “On Route has grown out of the traditional servery to become more customer friendly.”

“The concept responds to consumer demand for better quality food and service at motorway stations,” says Butcher. Lucid has designed seating areas, amusement zones and floor finishes for RoadChef, as well as On Route merchandising, uniforms, menus and internal communications.

On Route is being trialed at two service stations near Winchester on the M3, in conjunction with catering consultants Coverpoint.

If successful, the concept will be rolled out across service stations later this year, at which new packaging designed by Lucid will be introduced.

Beck’s to the future