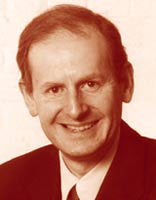 It sounds too good to be true – an organisation giving struggling, UK creatives money for nothing, no way? What’s it’s name?

But the National Endowment for Science, Technology and the Arts is more than just a fundraiser. New initiatives, such as educational software scheme FutureLab, mean that Nesta is also a buyer of design services. Just last month it appointed Blast to create the scheme’s identity.

Nurturing creativity and innovation is a noble enough mission, one that Jeremy Newton, chief executive of Nesta, feels is more important than ever in today’s trying commercial climate. Well, he would say that, wouldn’t he?

Newton is not deterred by media cynicism like this, however. Having spent most of his working life in fundraising for the arts, he knows that being lambasted by the press is a job prerequisite (which makes writing this more fun).

As point-man at one of the newest quangos in town (Nesta was formed by a £200m endowment from the New Labour Government in 1998), Newton is reassuringly unpretentious and down-to-earth.

In his early days, Newton followed particularly closely in his father’s footsteps. ‘My father was a part-time actor, but mainly an accountant – which is rather what I turned out to be,’ he explains. He trained as an accountant after studying languages and European drama at St John’s College, Cambridge, not quite realising his thespian ambitions.

‘I tried to be an actor for about three months and was employed throughout that period, but it became clear that it was not going to be a long-term professional option for me. So I went to the other extreme. Accountancy seemed to make sense as a way into working within the arts as an administrator,’ according to Newton, emphasising it was always his idea to move into this field.

After qualifying he swiftly joined the Eastern Arts Association as deputy director, where he stayed for 14 years. His experience, financial acumen and fondness for the arts then led him on to join Nesta in 1998, after a four-year stint as National Lottery director at the Arts Council, Nesta’s distant cousin.

At Nesta, Newton has been genuinely pleased with the organisation’s reception since it’s inception, given that ‘getting good press for a funding body is a doomed project’. He is quite sanguine about it all and doesn’t mind a bit of cynicism, because it has not been about the awardees themselves. This, he says, is the acid test.

‘Our awardees have not been treated cynically, which is very good news because some of the people we are supporting are quite wacky, some of their inventions are very unusual and they would be very easy to make fun of. But that hasn’t happened, and that I think is a big step forward,’ Newton says.

Asked if he thinks Nesta deserves more recognition, Newton replies, ‘Only when we deserve it. We took a decision very early on that we would not spend any time, money or energy promoting Nesta, and that what we would do would be to promote aggressively the people we support.’

Newton hopes that payback will start to occur naturally within the next year, as one or two projects hit home. He is confident that Nesta will now start to see the first financial returns on its investments (the group takes a small stake in the projects it funds), though it will be three to five years before ‘the world is full of famous people who have got there thanks to Nesta’, he quips dryly.

He explains why innovation and creativity need the support of groups like Nesta and the Arts Council: ‘There are a lot of obstacles in the way of people who have a kind of private vision of what they want to do.

‘Some of them are to do with early stage investment, relatively small sums of money that people need to experiment, to pilot ideas, and to play about with ideas. So we provide very early stage, small-scale venture capital funds that allow people to do this,’ Newton explains. ‘We’ve also found that there are people who also need time and space to explore their own creativity, so we have developed a fellowship programme that is primarily about that. That is about identifying people that could benefit from one or two years’ general assistance across that period.’

Newton says the first few questions made of any funding application are ‘unusual’. Unusual, as far as venture capital criteria go, in that they are about the person and whether a scheme is technically feasible, genuinely innovative, and demonstrates a degree of creativity and lateral thinking.

Thereafter, he says, it comes down to some fairly conventional capital investment criteria about production, the market, and so on. The first round of selection weeds out 80 to 90 per cent of the proposals very quickly and Nesta is now getting about 100 applications a month.

Most crucially though he wants to hear from designers. (Applications can be made through www.nesta.org.uk.)

‘We don’t see as many applications as I would like to see from the design sector. We do see some, and the ones we do see are of quite high quality. But it is actually an under-represented sector on the whole. I would be quite keen to encourage more,’ says Newton.