A set of stamps has been designed to mark the 250th anniversary of Beethoven’s birthday.

The “contemporary” range has been designed by Hampton-based studio hat-trick design, and includes six stamps, a first day cover, stamp pack and a record sleeve.

They have been released by Jersey Post in collaboration with the Beethoven-Haus, the museum that houses a major collection of Beethoven-related images and musical texts. 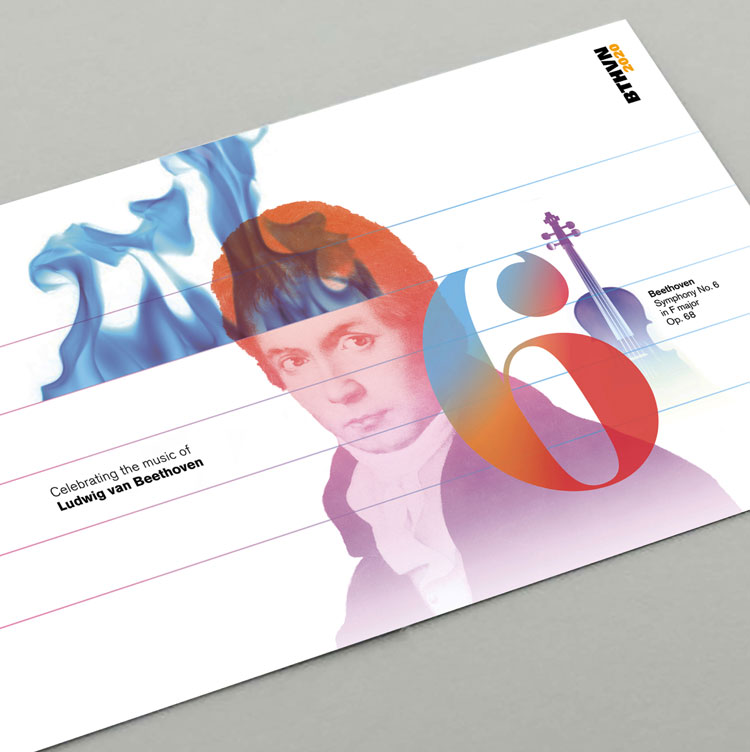 The German composer was born in 1770 and is widely considered to be one of the most influential composers of classical music.

“He shocked a lot of people” 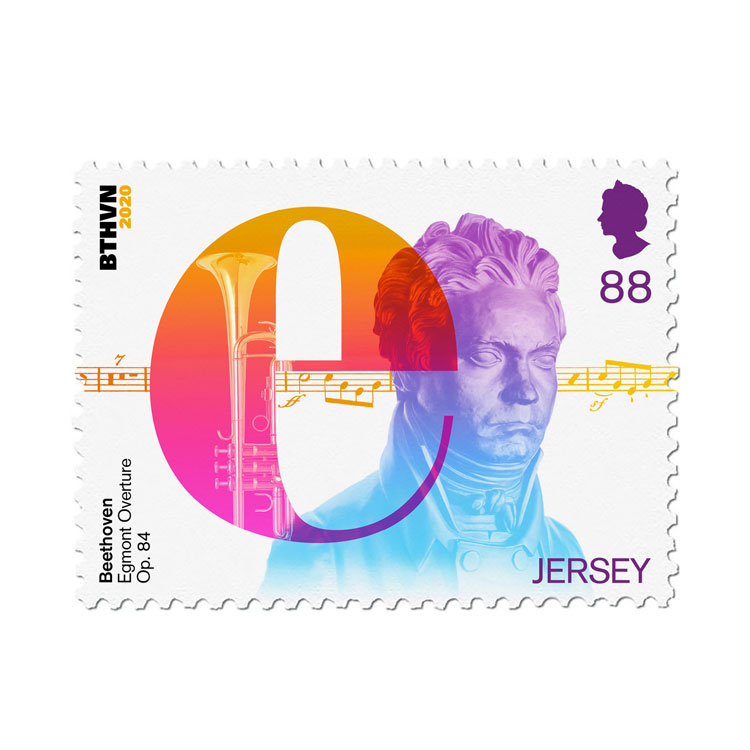 The project took around nine months to complete according to Gareth Howat, hat-trick design’s creative director.

Howat describes it as an “open brief”: “We were aware that on his 250th anniversary that there would be a lot of imagery out there, and a lot of it could be quite samey. We wanted to use the imagery in a different way.”

Howat says that the design is inspired by Beethoven’s “controversial” reputation, and his “revolutionary” approach to music. “He shocked a lot of people, and we wanted to reflect that,” he adds.

Graphic design that reflects the “vibrancy” of Beethoven’s music 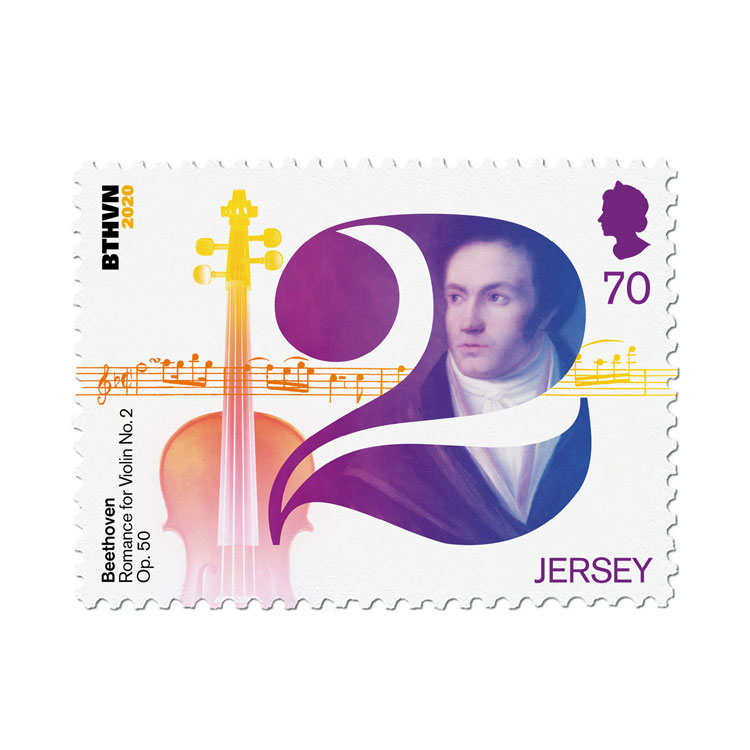 Each stamp is themed around a different piece of Beethoven’s music and includes a portrait (which have been taken from the museum’s collection) that roughly corresponds to the age he was when he composed it.

A letter or number is the central design element on each stamp, which matches the piece of music that’s being highlight. An e for the Egmont Overture or a 2 for Romance for Violin No. 2, for example.

Jersey Post worked with the Jersey Symphony Orchestra to choose the pieces of music, which vary from the famous to the less well-known. It shows a “wide range” of music, from overtures to concertos as a way to convey the scope of Beethoven’s music.

The images  have been “coloured up highly” to reflect the “vibrancy” of the music. Each musical arrangement has been represented by an excerpt of the score, provided by the museum. Some of the stamps have then been layered by an instrument that’s relevant to that piece of music such, as a trumpet for the Egmont Overture. 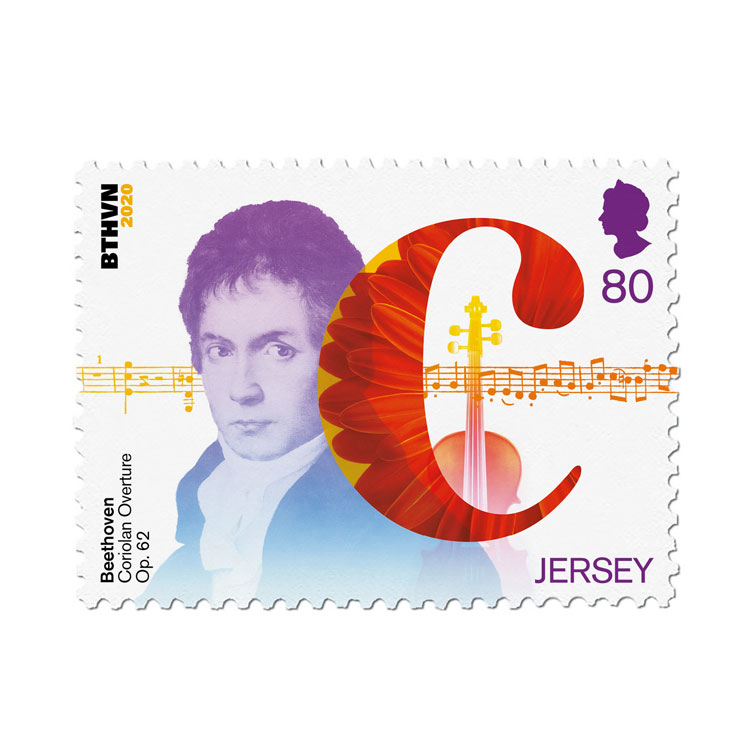 These elements combine to create a “modern montage”, Howat says. “We wanted to keep the designs graphic and eye-catching.”

Hexachrome printing has been used to give the images a “punch of colour”; a type of printing that uses six colours instead of the usual four.

A logo in the top right corner of the stamps has come from the Beethoven-Haus museum which is located in Bonn, Germany. It’s part of a campaign for the musician’s anniversary this year. Howat says that the museum was keen to offer the public a “different side” of Mozart as well.

A complete “suite” of stamps 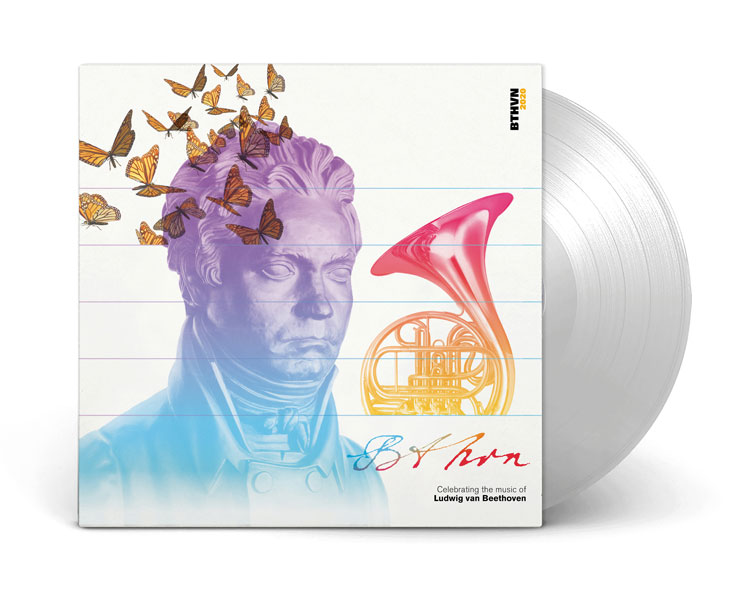 The limited-edition record is being produced with excerpts of the music, and the record itself is made from clear vinyl. “The design extends from the stamps through to the product so it looks like a suite,” Howat says.

Natural images have also been used in the collection. On the record sleeve, a group of butterflies has been placed around the composer’s head to show his “imagination” and to give the collection an “extra layer of visual richness”.

On the stamp for the Coriolan Overture, there is a close-up of a petals – which resemble flames – to represent the overture’s “vibrancy” and ‘loudness”. 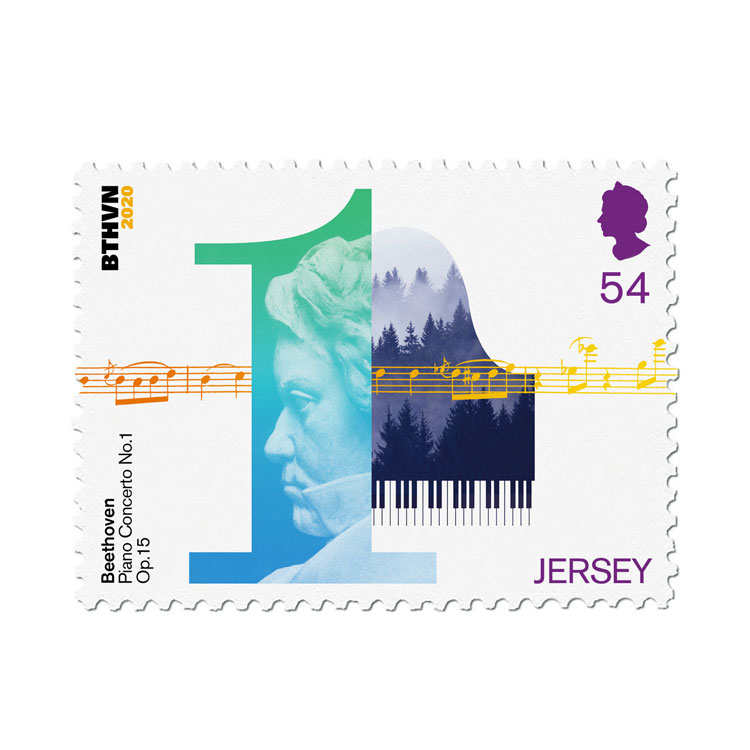 Part of the enjoyment of the project came from the openness of the brief, Howat says. After Jersey Post had made a selection of music, the graphic elements came from hat-trick’s own interpretation, allowing the studio to play with different elements. It was about getting the compositions “just right”, Howat says; “not being too complicated but not too simple”.

In the stamp for the Piano Concerto No. 1, forest imagery has been used to convey a sense of “peace and calm”. The side profile of his portrait bleeds into the image of the piano, so that it ties back into a representation of his imagination, Howat says.

“It was about getting his imagination to come to life,” the designer adds.