On-line retail has not replaced the high street, but a proposed innovation in the US could combine the two channels, providing the best of both virtual and real worlds, says Clare Dowdy

Remember when on-line retail was supposed to take over from, or even destroy, high street shopping? Those were the heady days of Boo.com and its ilk, when retail designers were seriously considering their future.

However, despite recent difficulties, the high street is still very much in existence, and, since then, the non-traditional forms of retail have lost some of their arrogance. Meanwhile, on-line sales have been steadily increasing – according to on-line research group Hitwise, visits to retail websites in the UK were up 14 per cent last December, compared with December 2004.

But perhaps the retail Holy Grail is not one platform or the other, but a combination of them all. This is certainly the thinking of those who are championing the multi-channel approach.

There is a bold move afoot in the US to turn such thinking into reality. Of course, there are individual examples of two-dimensional retailers setting up shop, so to speak. In the UK, Lumsden Design Partnership has transformed Lakeland from a kitchenware mail order company into a 30-strong chain. US businesses to have done likewise include cooking shop Williams-Sonoma and J Jill, a womenswear on-line catalogue.

But the vision currently in gestation, in the US, is for a large venue, where a host of brands that have never before had face-to-face contact with their customers get their first three-dimensional manifestation. Epicenter is the brainchild of Sheldon Gordon, chairman of retail real estate development firm Gordon Group Holdings. Design is by WPP-owned Walker Group.

Studies show that customers purchase substantially more from a single brand when they can access the brand through multiple channels, says Gordon. His hybrid idea is to take over big sites, such as beleaguered department stores, and fill them with small tenants. Customers would be able to try out and try on items, and payment would happen through a special hand-held device called a Spree (designed by Kaleidoscope, based in Long Island, New York). Then, rather than walking out with a purchase, items are sent to the customers’ home, à la on-line or catalogue shopping.

Antony Lee, chief executive of Epicenter, believes that ‘in a multi-channel world, consumers expect merchants to have retail stores’, so that they can interact with the products before buying them. In the US, more than 90 per cent of all retail spending still takes place in-store, and Epicenter’s theory is that a retail presence not only drives new revenue, but also increases business from the catalogue and on-line channels. 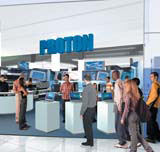 Because of Epicenter’s set-up, tenants are expected to be able to open a retail space there relatively cheaply. Staff and stock are kept at a minimum, and the Spree device means that transactions are literally in-hand. Jay Valgora, design principal at Walker, is creating another cost-saving device – ‘a kit of parts that can be customised for each tenant’.

Valgora’s inspiration for Epicenter’s interiors was a traditional European market, but the aim was to make it even more exciting. He likens the environment to walking into a three-dimensional Web page. To achieve this effect, he’s using floating planes of translucent materials and illuminated metal mesh, ‘to give shoppers the experience of walking effortlessly through dissolving space and light’, he says. Meanwhile, LED lights are used to create a unified backdrop of blue, computer screen-style ‘wallpaper’ to highlight each brand’s expression within the Epicenter frame.

‘I want to break down the heaviness of most retail stores,’ Valgora says. And, to this end, the big, open, circular spaces and high ceilings are a change from the normal layouts of present-day department stores.

Once the first Epicenter is up and running – hopefully next year, depending on suitable locations being found and purchased – there are plans to roll it out across the US, and possibly Europe.