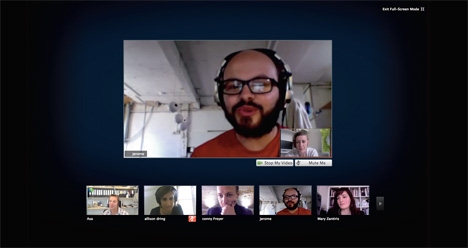 Parliament of Owls, the live online design masterclass programme, has completed its London trials and is now ready for full launch in the autumn.

The initiative, the brainchild of designer Daniel Charny of From Now On and co-founder Dee Halligan, features a series of masterclasses broadcast over the Web, conducted by some of the biggest names in British design classes have so far featured Asa Bruno from Ron Arad’s studio and Simon Waterfall of Fray.

The concept came about as a joint project which would be open to anyone regardless of geographical location and accessible online for people who can’t travel easily to the sessions.

The first full trial class took place online on 11 May with Launching a Business From Invention to Time Magazine, conducted by Jane Ni Dhulchaointigh, the developer of the multi-purpose variant of silicone known as Sugru.

Ni Dhulchaointigh says, ’As creative people, we have so much to learn from each other in terms of both ideas and practical advice.

’The chance to be able to ask questions in a safe learning environment with world-class speakers isn’t something I’ve heard of before.’

Despite initial technical hitches that were to be expected from the launch of the site, the trials were received well. Charny says, ’We had all the inevitable technical setbacks, which made us anxious, but ultimately we can deal with. If we hadn’t seen that happen it would have been game over,’ he says.

’We also got better at facilitating through the course of the trials, so the last trial was very much closer to our vision than the first,’ he adds.

Viviana Narotzky, director of Spanish industrial design association Adi Fad, who participated in the programme, says, ’I’m always keen to explore the possibilities of online collaboration there are new things coming up all the time and this seemed like a system with lots of potential.’

’I think it can develop into something really exciting and productive,’ she adds.

Charny says he hopes to expand the scheme so international designers can conduct sessions.

Shane Walter, creative director and chief executive of Onedotzero, is scheduled to conduct a masterclass in the autumn term entitled Partnering to Extend. ’I felt this was a novel way to share knowledge in an intimate environment in a very targeted and focused way,’ Walter says.

’It will also ultimately have an international dimension and means this is the only way to have access to these masters without the cost both in financial expense and carbon,’ he adds.

Some future developments being considered are conferences or a session in which the participants can socialise after masterclasses and develop what they have learnt in more depth. Halligan says, ’The idea has always been about a global, interdisciplinary conversation connecting remote people and places with immediacy, enabling otherwise impossible learning and sharing of experiences. It’s really all possible now so that’s certainly on our agenda.’

The project, which starts in September with a basic rolling programme, is being advertised within digital media using social networking sites such as Linked In, which is hoped to bring in a number of other participants.