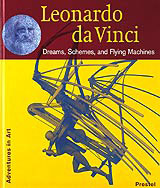 The problem with Leonardo da Vinci is that, after him, all other designers have tended to look a bit on the lame side. And not just designers, but painters and sculptors, too.

Da Vinci created the world’s most famous painting, recorded some of the earliest human dissections, and invented the parachute, the car and the helicopter. Never one to sit back with his feet up, he also managed to work out why the sky is blue in his spare time.

A new book for children aims to fire youthful imaginations into equalling the great man. It provides brief, but interesting information about da Vinci’s life and works. But more importantly, if inspiration is the point, it reproduces da Vinci’s fascinating sketches.

Even the greatest cynics have to work hard to tire of da Vinci’s sketches, and the selection chosen for Leonardo da Vinci: Dreams, Schemes and Flying Machines features designs for giant crossbows, cannon and portable castles. There is also a page of his cutaway drawings of the human body. All, in other words, gory enough to get children interested. Helicopters and cars are included, to, for the more technically minded.

Part of the Adventures in Art series published by Prestel, the book forms part of a set. It appears to be a good teaching aid, sparking interest rather than giving an exhaustive account. It would take a lot of information for young readers to pass an exam after reading the book, for example. In fact, da Vinci’s life is summarised in less than a page, an impressive piece of editing considering his lengthy and accomplished CV.

The book itself is contemporary in design, with creative work attributed to Iris von Hoesslin, at the Munich offices of the original German publisher. It provides a clean canvas for the display of da Vinci’s own work.

The problems that could occur if the book is successful and young readers are indeed inspired to emulate da Vinci can only be guessed at – they could be setting themselves an unattainable target. Best to book a child psychiatrist early, just to be on the safe side.

Change ahead for Met Office