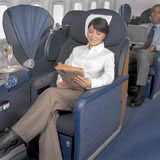 The design teams behind the colossal £100m relaunch of British Airways’s business class service can be revealed for the first time as Tangerine, Davies & Baron and Winkreative.

The design consultancies are working on a closely-guarded overhaul of Club World, one of BA’s strongest profit centres, which is due to be relaunched this summer and rolled out internationally.

Tangerine is handling product development for Club World and is understood to be designing the latest version of BA’s business class flat-bed. The Club World lounge interiors will also be given a complete overhaul, with concepts by Davies & Baron, designer of the original Club World cabins.

Although BA is keeping the details of the project tightly under wraps, a spokeswoman for the company says lounge concepts will be trialled in locations around the world, in preparation for the launch of a final format at Heathrow’s Terminal Five, which opens in March 2008. The airline’s flagship Club World lounges are located in John F Kennedy International Airport in New York and Heathrow Airport in London.

The extensive redesign will reach across the whole suite of cabins, lounges, packaging, branding and printed materials for the service. Winkreative, which redesigned Swissair in 2002, is also working with the airline on the Club World offer, but the BA spokeswoman declines to confirm the exact nature of its work.

Tangerine created the original flat-bed in 2000, when BA became the first international airline to offer business class travellers a seat that converts to a 6ft bed. Mike Crump, BA’s departing head of design management, will continue to work closely with Tangerine on design development, before he leaves under the airline’s voluntary redundancy programme (DW 9 March).

Consequently, the Club World overhaul is one of the final projects at BA that will be overseen by the design management operation. After Crump’s departure, the team will be dissolved into separate marketing and product development divisions.

• British Airways spent over £200m on the launch of the ‘lounge in the sky’ in 2000, with the Tangerine-designed flat-bed

• A £100m investment has been allocated for the relaunch, including upgrades to in-flight entertainment systems

• Principal design consultancies on the project are Tangerine, Davies & Baron and Winkreative