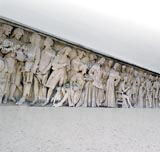 The departure of Land Securities marketing director Elizabeth Lockwood, the key architect of the company’s consultancy roster, leaves the future of design at Britain’s biggest property development business in rather a state of flux. But, while a replacement is being sought for Lockwood, design is not being disregarded completely.

Mike Hussey, who joined Land Securities three years ago as managing director of its London portfolio, had very specific ideas from the outset about the company’s approach to marketing.

‘I didn’t want to involve any consultancies who’d done property marketing,’ says Hussey. ‘I didn’t want the same approach of the past 40 or 50 years. We needed a distinctive edge.’

With a London portfolio that includes places such as Piccadilly Lights and Whitehall, the company had a lot to talk about and, through its innovative use of design, it has shaken up the sector’s approach to marketing.

Its latest campaign, Building Life into London, launches in the next few months. Its aim is to show prospective customers, as well as consumers and the trade, that it has delivered on promises laid out in its first major marketing push, Capital Commitment. Ads – due to run across national newspapers, trade magazines and outdoor slots – were created by Williams Murray Hamm, better known for its graphics than its advertising. The consultancy is one of ten on the Land Securities design roster, and it was also responsible for creating the ads for the Capital Commitment push.

‘We looked at using an ad agency, but WHM were so capable of doing ads and the result was a very refreshing campaign,’ says independent consultant Jan Casey.

Casey came on board at Land Securities in 2003, to help Hussey and his marketing team boost the company’s design and marketing credentials. Following a brand assessment, she helped create Capital Commitment.

‘Hussey came up with the slogan,’ she remembers. ‘It summed up the company’s commitment to the capital as well as committing capital to London.’

Specific design projects included a sumptuous coffee-table book on Victoria. ‘The company was doing a lot of development in Victoria and needed to market the area abroad,’ says Casey. ‘If you go to New York and mention Mayfair, everyone knows where that is. But say Victoria and they look blank.’

A non-branded book on the area’s attractions, shops and culture was soon to land on the desks of potential customers.

‘People, such as the chief executive of Citibank, would find this beautiful book arrive and later on might get some information about new building work in the Victoria area. It was very intuitive and creative,’ says Casey. With buildings that span a range of sectors, from retail to culture, residential to business, Land Securities has multiple audiences and design needs. Recent developments include One New Change, a shopping complex and office block opposite St Paul’s Cathedral. From launch parties, to retail promotion, to high-end corporate letting brochures, the company needed an approach to design that enabled it to talk to different audiences in a cohesive way.

Its answer was to build a design roster of consultancies that, rather than competing with each other, collaborate and share their work and ideas. There are now ten consultancies on the roster – Hat Trick Design, NB Studio, Esterson Associates, Williams Murray Hamm, Radford Wallis, The Chase, Together Design, Purpose, GBH and 300million – who meet twice a month with the client to discuss and input into ongoing work. 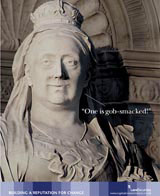 During one meeting, for example, consultancies will ‘show and tell’ their work, says Hussey, while another meeting will be more ‘freeform’, with consultancies sharing their ideas and thoughts.

‘When it all comes out of the other end of the machine, it is reasonably well-coordinated,’ he says. ‘It increases both the quality of the products and the process.’

For, in the design world, the people that designers are most concerned about are their peers, says Casey. ‘This is a brilliant concept. Standards have risen and it’s like a mini-Bauhaus with everyone learning from each other.’

Since shifting its emphasis to design, Hussey has noticed some of its competitors take a more sophisticated approach to communications, and has raised the profile of the brand and the marketability of its products. Its marketing work has been collated into a book – Bright Lights, Big City.

Hussey is keen that his company’s design continues to expand and improve, in order to ensure that the branding of each of its buildings reflects its architecture and design.