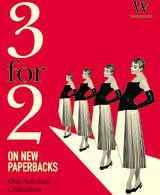 Conran Design Group has created an in-store communications style for Waterstone’s that will make the brand’s authorial voice more evident in the book retailer’s merchandising.

The project includes tone of voice, a colour palette and point-of-sale materials including seasonal promotions. At the same time, CDG has ‘tweaked’ the Waterstone’s identity, relocating the letter W atop the logotype, updated its carrier bags and is currently finalising brand guidelines.

Now part of HMV Group, Waterstones has 194 stores across the country. Book retailing has, meanwhile, become an increasingly competitive sector, with discount retailers, on-line specialists like Amazon and supermarkets all marked as competitors.

As a result, conveying Waterstone’s ‘passion for books’ while still communicating value for money was a key aspect of the brief, says CDG design team leader Richard Stayte.

‘It’s about opening up to a broader market, but by focusing on its key strengths. Waterstone’s is as happy to sell Trinny and Susannah as it is Troilus and Cressida,’ he says.

Many book chains use quotes and staff recommendations to entice customers, but Waterstone’s is going a step further by commissioning illustrators in a bid to achieve differentiation, says CDG designer Gerard Ivall. Tobias Hickey and Otto [sic] are the illustrators on the current Autumn Collection campaign.

The group also tried to recapture the ‘brand essence’ and the spirit of Newell and Sorrell’s initial identity work in a contemporary way, says Ivall.

‘When it started out, Waterstone’s was clear about its corporate identity and how it wanted to talk, but over the years this became diluted. Messages had become more offer-driven to compete with the likes of Borders and Books Etc, but the brand was looking like everyone else. It had lost its personality.’

CDG won the work after a three-way pitch in March.