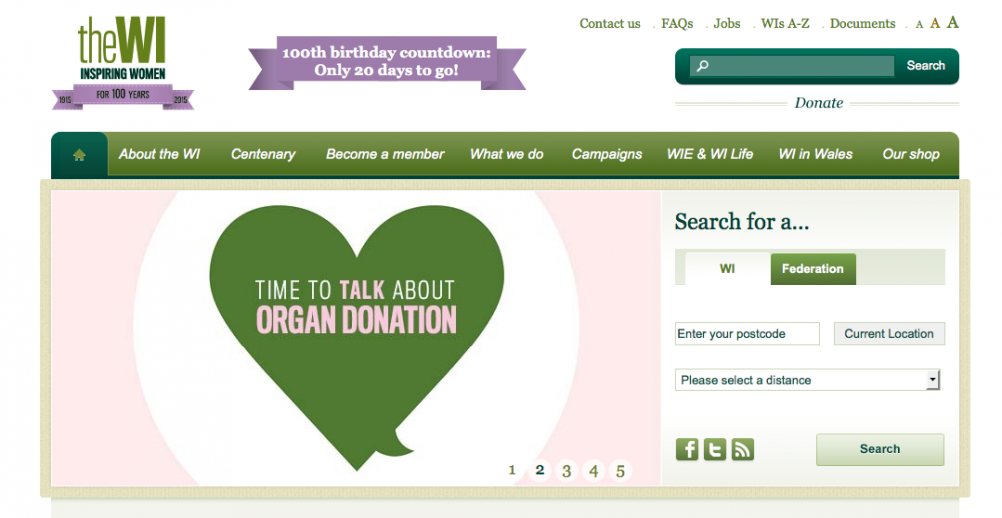 The Women’s Institute, which is currently celebrating its 100th anniversary, is hoping to move away from its traditional Middle England image by revamping its website and in turn enticing younger women to sign up.

The website has been made image-led and mobile-responsive, with its 242,000 members being able to upload information and photos of their local Women’s Institutes.

The new site uses the WI branding developed by Equilibrium in 2009.

“We reached a stage where the website was filled with lots of information about the WI, but not with what people actually wanted to read,” says Charlotte Fiander, head of communications at Women’s Institute.

“With the relaunch, the website provides the ability for each individual WI to take ownership,” she says.

But there is another reason for the brand’s digital makeover, which was managed by digital agency Squiz.

“The responsive design has brought us up-to-date in that respect. Nowadays, people expect to go online, and for a national organisation to have a well-organised site,” shesays.

“The fact that half of our audience now comes from mobile devices supports what we are saying.”

In the first month since the relaunch the WI reported a 22% rise in traffic, a 23% rise in new users and a 20% rise in mobile users. Recent figures show that 49% of its website traffic comes from mobile devices.

The organisation is now hoping to start working on a members-only section. Fiander says:
“It’s a bit like an intranet, but much more easily accessible. We’re looking towards a launch at the end of this year.”

The chase for younger audiences is in line with a more general development within the company, which is gaining around 1,000 new members a week.

“Anecdotally, the average age is coming down, but we still have lots of members in their 60s, 70s and 80s,” Fiander says.

“What we have been seeing is groups of younger women who have moved out of the larger cities and started families setting up new WIs, with help from the pre-existing WIs.”

The brand also believes that digital changes have led the Women’s Institute to be “valued now more than ever”.

“While it is important that people are sharing their lives and keeping in touch online, there’s quite a lot of loneliness. Certainly in big cities,” she says.

“WI continues to provide a space to meet people and offer real interactions. I’d say the WI is valued now more than it was.”

The charity has been celebrating its 100th anniversary over the past year, which so far has included a Royal garden party with 8,000 members and an annual meeting at Royal Albert Hall with The Queen.

“This year, the focus has mainly been celebrating with members and using the opportunity to promote WI for all women,” Fiander says.

On its official birthday on 16 September, the organisation will be holding around 600 separate parties throughout UK.

“We are holding a ‘Big Twitter Stitch’, which is a digital craft celebration, where members will be stitching happy birthday messages from Twitter onto a canvas,” Fiander adds.

On 17 September the company will also present its biggest piece of research in the Houses of Parliament.

Fiander believes that the brand image has broadened, rather than changed over the years.

“The very first Women’s Institute focused on preserving food supplies during the war. Thankfully, we don’t need to worry about that in the UK anymore,” she says.

“Nowadays, health is a very big area of interest. Our last couple of campaigns have aimed to improve the numbers of midwives and organ donors. So there are other issues we focus on.”

This article first appeared on our sister title Marketing Week.