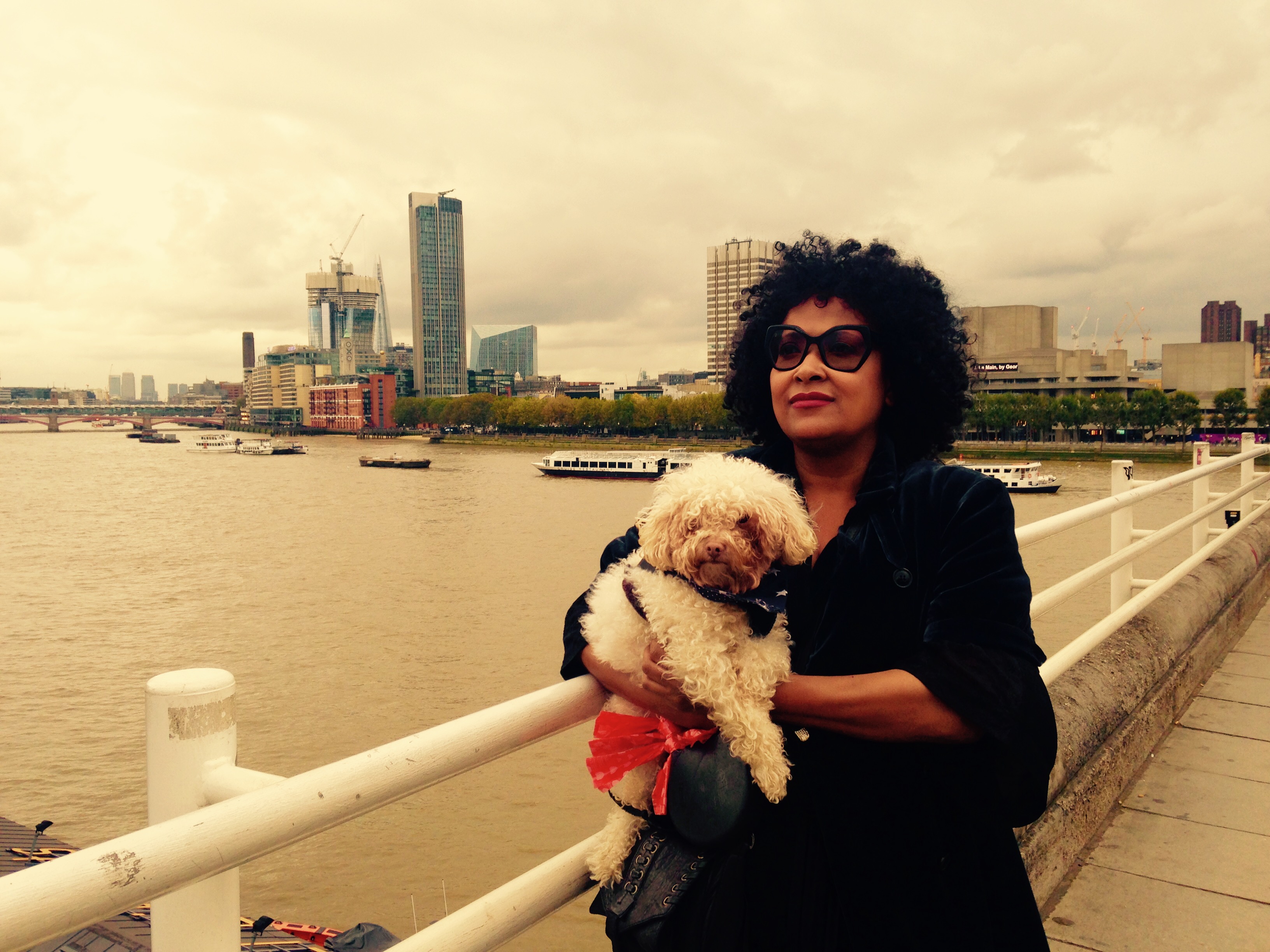 For this year’s Black History month, I am proud to shine a spotlight on one of the first Black female creative directors to grace the British advertising scene. Still creating effective and award-winning work wherever she goes, please give it up for Joanna Arscott

It’s a mystery. My birth mother was White British and my father was… I knew neither. I was adopted in 1966 and diverted from a Dr. Barnardo’s orphanage into an amazingly open-minded white Welsh family and brought up in a village in Gloucestershire. My sights were always on London and when I entered 80’s advertising as a naïve 18 year old, I didn’t understand the word “career”.

I fell in love with Adlands’ kaleidoscopic Soho culture. It was a fabulous new world – a visual training ground. It opened my eyes. Margaret Thatcher as a strong female leader, the black leather Filofax that made me feel “grown up”, Champagne at Kettner’s on my first credit card (always over the limit), gallery openings, photographers’ studio parties, directors’ private views, illustrator’s daily visits to the agency, sitting in a restaurant window in Old Compton Street watching the glamorous transvestites from Madame Jo Jo’s strutting past on their pre-performance stilettos… I was captivated by Soho. It was an irresistible “hotchpotch” of London creativity.

In school, the career teacher pushed me towards farming, banking, secretarial work or store work. Even though I was the School Lamb Monitor, Chicken Monitor and Rabbit Monitor, I knew in my heart I was a creative writer. I would do celebrity interviews of visiting bands – Culture Club, Depeche Mode, Thompson Twins – for the school magazine, write numerous begging letters to the BBC and enter things like the Godley & Crème Video Concept competition. All failed. But as fate would have it, I became a school librarian – to get out of the lunch time rain – and noticed a careers book. And there it was, advertising. It started a journey, which really picked up in 1985 at Watford College of Art.

Being a female creative, being a black creative – one of three and being a “big personality” who would wear ball gowns and feather boas to work daily.

I soon realised that none of these things mattered though. The industry embraced me with open arms. I think, looking back, even at that age I understood the power of my own brand; how standing out was a good thing – after that initial moment of shock I saw on creative director’s faces when I walked in to a room. I had to be great at what I did. This was 1980s, 1990s advertising.

In my youth it was Terence Conran. His stores and restaurants in particular. Dave Droga too. At Saatchi & Saatchi as executive creative director he let me forge my own path in integration. I knew I didn’t fit into one box creatively. I had some ridiculous titles; Ambassador of Integration was the most memorable. But the creative freedom he gave me to be me, was life changing.

As a writer, I always had a visual eye. That’s the way it tends to work in advertising – the art directors come up with great copy, the writers influence design. If you get it, it trains you to appreciate and understand both. I’ve led departments of 30+ designers.

Today it’s Chaka Sobhani. The new chief executive at Leo Burnett and the new breed. She gets creative in all it’s forms and is herself multi-talented. A breath of fresh-air.

Charlotte Mensah too. Award winning, celebrity afro hairstylist and artistic hairdresser of Hair Lounge Salon in Notting Hill. Days ago she received another award for her unique product from Stylist magazine. Her branding. Her product range.  Her hands on approach in styling architectural hairstyles is amazing. My afro thanks her for it.

I wish there was one. I’ve worked in London, Paris, several American States and every journey and client experience has brought new learnings. Designing billboards in Saudi Arabia for a family product when you can’t show women was interesting. Creating Coca-Cola Olympic campaigns as part of an agency council. Concepting a 48-sheet poster in clear glue that only revealed its message when the pollution in the air stuck to it.

I don’t have that brief yet. But it’s in my heart. Today, there should be no division between disciplines. One idea – many executions. Egos and timelines get in the way right now across agency councils. Designers want three months. Ad people want three. Digital want four and so on. I get it. But we need one core idea. I’ve worked in all of these disciplines so I’ve found I can naturally break down barriers for effective creative platforms, to give all disciplines what they need. I did if first for Coca-Cola in the States. Agencies right now need more people like me. A mixture of a pacifier and creative director, I create effective creative platform.

Sally Tambourgi, creative director at J. Walter Thompson Dubai. Sally’s visual eye and attention to detail is wondrous to observe. She travels the world and creates things of beauty. She is meticulou.

Be yourself. Keep inspired.

That role in my head that doesn’t exist yet.

This is a magnet for top international chefs and guests can pick up plenty of culinary tips. Barbados has been creating some of the world’s finest rum for over 300 years, so there is also the chance to discover how to make the perfect rum punch.

After the establishment of the first settlement in 1627, Barbados remained a British colony for more than 300 years. Its independence on 30 November 1966 was marked by the raising of the Barbados national flag and playing the new national anthem for the very first time.

FILM AFRICA 2016 is the Royal African Society’s annual London film festival celebrating the best African cinema from across the continent and diaspora. Established in 2011, every year Film Africa brings diverse London audiences a high quality and wide-ranging film programme accompanied by a vibrant series of events, including director Q&As, talks and discussions; professional workshops and master classes; school screenings and family activities; The Industry Forum; and Film Africa LIVE! music nights. Film Africa also recognises and supports new filmmaking talent through the Baobab Award for Best Short Film and the Audience Award for Best Feature Film. The 2016 festival will take place in venues across London from 28 October to 6 November.

Rele Gallery is delighted to announce its next exhibition The Adorned Series by U.K based Nigerian photographer – Ade Asiko. Asiko’s work navigates and places at the fore the intertwined relationship between beauty, perception, and self-confidence. He directs, explores and experiences issues pertaining to culture, identity, and femininity. Asiko is a self-taught photographer, his works have been featured in group exhibitions at Truman Brewery, Gallery of African Art and the Brunei Gallery in London. This is his first solo exhibition. The exhibition will open run through to November 20th, 2016.

If you have any forthcoming events that you would like to be considered for inclusion in this column, please do not hesitate to contact me by emailing info@jon-daniel.com.

Jon Daniel is a London-based Independent Creative Director, Designer and Curator. For more information visit his website at www.jon-daniel.com | or his blog at www.visual-intellectual.com