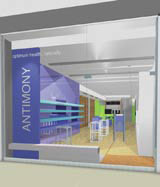 Third Space has landed the store interior design brief for natural remedy and health food retailer Antimony, as it embarks on its first concerted branding exercise ahead of expansion.

The brief, which was won on the back of a three-way credentials and creative pitch, sees Third Space responsible for creating interiors and signage in Antimony’s flagship store on London’s Farringdon Road.

The work is part of a revamp that will see the outlet extended from 24m2 to 80m2.

Scheduled for completion in early May, the project marks the first phase of Antimony’s expansion bid, which should see it roll out up to five new outlets in London over the next three years.

According to Antimony proprietor Rizwan Govindji, expansion may eventually take in regions outside the capital.

Third Space was briefed to create an ‘oasis-like’ feel for the Farringdon store interior, as part of Antimony’s bid to ‘define a new niche’ in the remedy and health food retail space.

‘Existing health stores tend to be a bit quirky and dusty,’ comments Govindji. ‘We want to offer a more mainstream feel.’

The store, which has been zoned into distinct areas, features a ‘contemporary mix of warm brickwork and clean, white, bright spaces’, according to Third Space managing director Anthony Parham.

Meanwhile, Yellow Red has revamped the store’s logo, previously designed in-house, and is also working on stationery and fonts.

Govindji says it was likely both Yellow Red and Third Space will be retained for future store openings and a possible website launch.