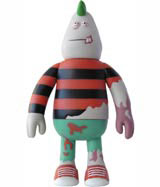 The walking dead are the new ‘in crowd’, according to toymaker Amos, which launches a set of six collectable Zombies in May. Designed by illustrator James Jarvis, In-Crowd is an ongoing series of 8-10cm figures, produced in collaboration with artists and designers. Three more sets are planned, including the Forever Sensible Motorcycle Club, which launches in mid-autumn. Figures will cost around £10.