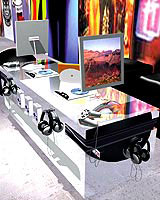 Modern-day lads are the target for a new “blokes’ heaven”-styled barbers shop from Unilever’s Lynx brand, designed by multi-disciplinary design consultancy Jump. The venture will open next month in central London.

The interior seeks to be sympathetic to the shop’s target audience, featuring private cutting booths with TV screens and built-in sinks and a state-of-the-art waiting area with PlayStations and Gameboys.

Jump co-founder Simon Jordan says the concept is designed to reduce the “risk factor” many young men associate with a visit to the hairdresser.

“We have designed a space blokes can call their own, and constructed it around their needs rather than the operational requirements,” he adds.

“Grooming, particularly hairdressing, is becoming more important to young men,” says Patrick Cairns, Lynx brand director. “Hairdressers are seen as a predominantly female environment, and barbershops as old men’s territory – so either way, both are intimidating experiences [for our target market].”

Keith Weed, chairman of Elida FabergÃ©, the Unilever subsidiary which markets Lynx, adds: “You can have a great haircut without bumping into your mum’s best friend in curlers.”

The first Lynx store opens on London’s Oxford Street in September, and test stores will launch at other sites over the next 18 months. If successful, the concept will be rolled out across the UK over the next three to five years.