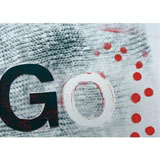 Inspired by the Experimental Type course at the London College of Communications, the Random collective consists of former students who kept up the exchange of ideas. It is about to stage its first exhibition, says John Stones

Words, words, words. The actual and virtual worlds we inhabit are full forums in which people share words about everything imaginable. But the Random Project does so in a slightly different way – by playing around with the physical nature of those words, teasing the typographical forms in which we encounter them.

The Random collective is the brainchild of graphic designer Sarah Hyndman, who when not running her consultancy With Relish, teaches the year-long Experimental Type evening course at the London College of Communications.

It came about, she says, as a way of ‘carrying on the discourse’ between the students, most of whom are already designers or artists in their own right. The project has gathered its own momentum and allows the original participants to keep in touch both socially and creatively, which is handy given that some of them are now as far afield as Germany, Brazil and India.

Words are arbitrarily chopped out of an old copy of London’s listing magazine Time Out and reworked into what Hyndman carefully refers to as ‘typography-led design’. To allow other designers to take part in the fun, a postcard element has been introduced, in which participants e-mail a number between one and 1000 and receive a word in return, which they have to fashion into an A6 postcard that is posted to the collective. These cards will join the other work to form part of the collective’s first exhibition, which will take place in London’s East End as part of the London Design Festival. 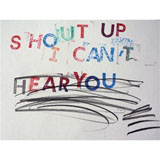 The work is varied, but shares a creative wish, says Hyndman, ‘to stay away from the computer as much as possible’. Given the reliance on technology to share the work (members upload and e-mail each other work), this is somewhat paradoxical. But it does mean that the work shares the same complicated relationship with the noisy outside world as the Dada typographic montages of which the work is so evocative and which formed part of the study of the course.