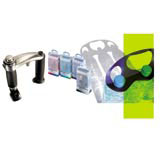 Crossover is a word that can have distinctly pejorative overtones. Opera divas singing music they really shouldn’t. That kind of thing. But people moving beyond their usual sphere, as well as traditional and comforting boundaries, can also result in genuine innovation as a fresh pair of eyes are brought into play.

The now ubiquitous clichÃ© ‘paradigm shift’ has its origins in Thomas Kuhn’s famous 1962 study of scientific revolutions, which found that changes in a discipline are nearly always executed by figures who come from outside or adjacent areas.

Now product designers, once a clearly demarcated subset, are increasingly straying into other areas of design. The output of product design consultancies such as Seymour Powell, Priestman Goode, PDD and Factory Design is no longer predictable.

Bruce Wood, director of Different by Design, says diversification is a recurring trend. ‘The boundaries are fudging,’ he says. ‘Product designers are diversifying not only into adjacent areas of design, such as multimedia, but also into the manufacturing and selling of products, even equity investment for new projects.’

But he notes problems can arise when designers find themselves overstretched, or when manufacturers are nonplussed by a designer’s lack of expertise in a certain area.

For White, the shift is a direct result of advances in technology. ‘Technology has democratised how designers can present their ideas. You don’t need to be a fantastic draughtsman any more.’

He believes the interdisciplinary and collaborative nature of product design means diversification is a natural progression. A packaging client looks for a product designer, White contends, who can offer genuine and patentable innovation. ‘The shelves are overloaded with packaging graphics ideas. Anything good is very quickly copied.’ By introducing a packaging device that can be patented, innovation can be protected, he says.

Mark Delaney, former manager of Samsung Design Europe, has just set up a new group called Plan with product designer Kevin McCullagh, formerly of Seymour Powell Forecasting, (DW 27 January) because he believes the future of product design in Europe will become more strategic. ‘It’s not about applying shapes to objects, but about working together with companies to see what they are going to manufacture. Product designers are good at putting together trends and all the contextual stuff, such as brand and price points,’ he says.

Of course, there are commercial reasons for mixing disciplines. Helen Gray, managing director of PDD, says, ‘Designers who can diversify are much more valuable. We have had to do it – if you don’t you don’t get the business.’

While PDD has always been involved with structural packaging, she says it has only developed as a stand-alone area of the business over the past three years.

Clive Grinyer, a former product designer and now Orange World director of customer experience, recalls his disappointment when he heard his former colleague, Apple Computer design head Jonathan Ive, disapproves of designers straying into other areas. Grinyer says, ‘We need designers to shed the security of their disciplines. Design for me is the ultimate transferable skill.’

His hopes may be realised. The distinction between genres is becoming meaningless for graduates from the Royal College of Art and Glasgow School of Art, where product design is taught with an interdisciplinary bent.

Diversification is not the only way – young designers are also moving into product design.

Julia Lohmann studied product design at the RCA, but she says her background as a graphic designer – which has disconcerted people – has informed her product design, for instance in curves of the plastic bottle carrier PET-Pic she designed for German engineering company Zeltec, or the intricate tracery of her Ruminant Bloom lamps, made from sheep stomachs.

Ulla Winkler is another young German designer working in the UK who is unwilling to be constrained by traditional genre distinctions. Having studied architecture and then furniture design, she then studied product design at the RCA, graduating in 2003 – a year earlier than Lohmann. She now specialises in ‘designing experiences’, insisting though that work such as Energy Flow, a permanent exhibition at the Science Museum, remains product design. Winkler says it was her understanding of human interaction, a direct result of her training in product design, that allowed her to create these environments.

The stretching of product design to its limits could continue to lead to interesting work. Or it could trigger a shift back to rigid separation between disciplines. However, the commercial realities suggest otherwise.