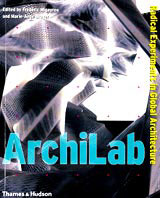 ArchiLab: Radical Experiments in Global Architecture is a fat book, based on a series of conferences about ‘radical experiments’. It is designed by Laurent Pinon and published by Thames & Hudson. None of the buildings shown are actually built, and so every one is a model or a fuzzy computer rendering. The design tries to make itself seem even more complicated than it actually is. Pinon has used lots of overlapping, colliding and butting up, and set his curvy computer typeface in shape-shifting, I-am-too-radical-too-ever-be-the-same-twice columns on top of the relentlessly similar images.

He could have done with reading some of the manifesto-like assertions in the book. One extract, ‘We are very suspicious of all systems, responses, dogmas and premature answers… we prefer not to find ourselves locked into procedures that end up hampering the imagination’, could be a condemnation of Pinon’s treatment, which is both hard to read and has ‘one-trick pony’ written all over it.

Archilab, radical experiments in global architecture, edited by FrÃ©dÃ©ric Migayrou and Marie-Ange Brayer, is published by Thames & Hudson and priced at £28