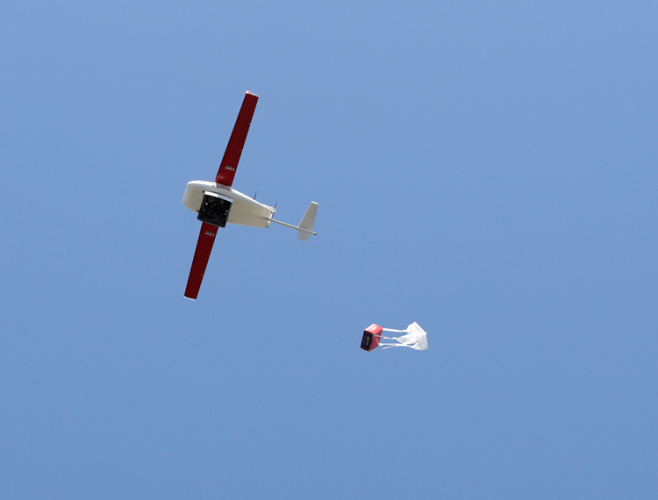 The service will provide contactless, on-demand delivery of personal protective equipment (PPE) and other “critical medical supplies” to medical responders in the North Carolina metropolitan area. It aims to relieve pressure for hospitals dealing with the coronavirus pandemic, where medical supplies are urgently needed.

Adapting quickly to the crisis

Novant Health is a healthcare network based in the south-eastern US, which operates 15 hospitals and almost 700 locations. It hopes to “adapt quickly” to the coronavirus virus pandemic through “testing, drug trials, and vaccine distribution”. Initially two facilities will be served; Novant Health Huntersville Medical Center and the Novant Health Respiratory Assessment Centre in Huntersville.

The distance will range from 20 to 30 miles for a round trip. Previously, drone flights were only around a mile and a half in distance. It marks the longest-range drone delivery flights in US history, according to Zipline.

The drones can take off and land at emergency ‘fulfilment centres’; they can carry almost four pounds (around 2kg) and fly up to 80 miles per hour. Zipline has created an emergency distribution centre in Kannapolis, North Carolina, which is close to Novant Health’s logistics centre. These will provide the “critical medical products” for delivery.

Zipline CEO Keller Rinaudo says: “We’re likely in for a long-term fight against COVID-19. Using contactless done logistics will be an important tool in that effort. The work underway here in North Carolina will provide the rest of the country with a blueprint for how to build the most resilient and responsive health care system possible.”

North Carolina’s secretary of transport, Eric Boyette says that the state will rely on “innovative solutions” like Zipline’s during this “unprecedented situation”.

The partnership has plans for the next two years, aiming to expand beyond emergency operations to “regular commercial operations serving health facilities and, ultimately, patients’ homes across the state.” It hopes to one day “create a new national model for building the most resilient and responsive healthcare system possible using contactless drone delivery”.

Design Week originally covered Zipline’s work in Rwanda, where it was set up to service hard to reach rural areas, either because of poor infrastructure or as a result of natural disasters like flooding.

Its co-founder Keenan Wyrobeck told Design Week about setting up the company, and its aim to deliver blood: “We kept hearing about these big vaccination campaigns that Bill Gates runs or why World Health Organisation initiatives were failing because of logistics”. Members of each of the co-founder’s families who worked in public health also pointed them towards the problem of blood supply.

One barrier to the use of drones as delivery systems, especially in urban areas, are regulations around air restrictions. The US expansion has been approved by the U.S Federal Aviation Administration (FAA) and the North Carolina Department of Transportation.

According to the company, it is the first time drone delivery flights have been allowed to operate in airspace where all air traffic is managed by the FAA, and it is also the first time the FAA has granted permission of a drone delivery operations to a US healthcare system. Zipline’s drones have a range of over 100 miles, which means that 20 health facilities could be served if additional routes are approved by the FAA.