Music has worked with illustrator Jane Bowyer to transform a new children’s department at Manchester cancer hospital The Christie, to help distract young patients as they receive potentially life-saving treatment.

The proton beam therapy centre provides treatment for both adults and children, and is the first NHS trust offering this type of therapy in the UK. Music has transformed seven rooms in the children’s department, for patients aged under 16.

Proton beam therapy is a type of radiotherapy, which uses a beam of high-energy protons rather than x-rays to target and treat cancer.

Its main advantage is that it can precisely target tumours while avoiding healthy tissues and organs around the cancerous cells, something that is of particular benefit for children and young adults, whose organs are still developing.

It is only suitable for certain types of cancer, such as complex brain, head and neck cancers. 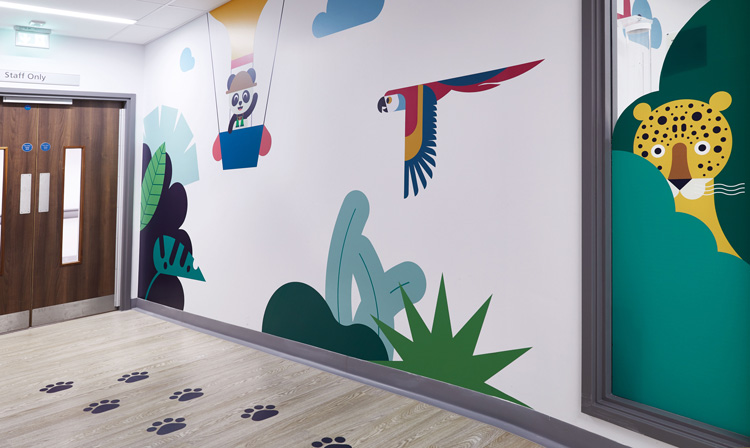 Creatively-directed by Music, illustrator Jane Bowyer has created animal characters, which grace the walls and ceiling tiles of the rooms in a bid to create a “friendly distraction” for young people having treatment, says Bowyer.

The characters are also part of a running storyline across the walls, which patients can follow to get to know the animals as “buddies”. They also feature on the ceilings, so that patients lying on their back during treatment can see them, and paw-prints appear on the floors, acting as wayfinding from room to room.

The animals go on a “journey” across rooms, adds Nicki O’Donoghue, creative at Music, travelling from a nautical, underwater scene in the anaesthetics and treatment room, through to a “lively, jungle” scene that greets patients as they wake up in the recovery room. 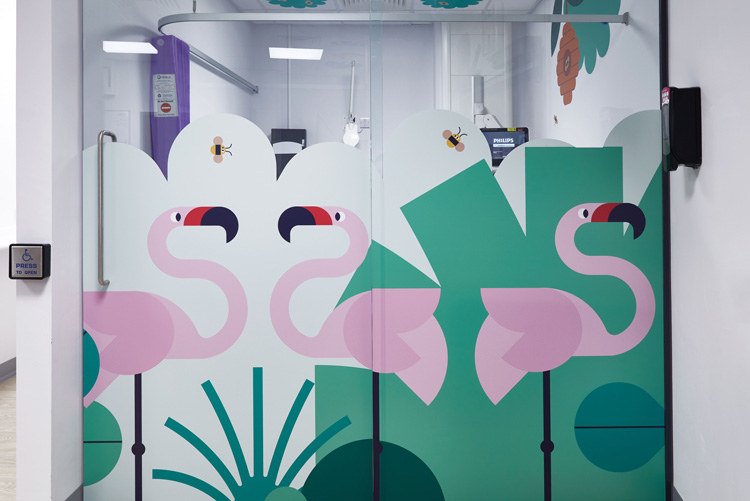 Graphics are also used to cover up potentially distressing objects along the way — for example, the mechanical doors leading to the computed tomography (CT) scanning area has been made to look like a giant submarine, and features animals, portholes and other elements.

Characters include koala bears, elephants, tigers, orangutans, birds and more — but a constant element is a character called the “proton panda”, who appears in a small size, sometimes hidden, across all the rooms. It is the children’s job to try to find the animal as a “Where’s Wally?” style exercise.

There are other interactive elements, including a magnetic wall in the specialist play room, a room specifically designed to help young patients’ mental health and aid them in understanding their treatment, says O’Donoghue. 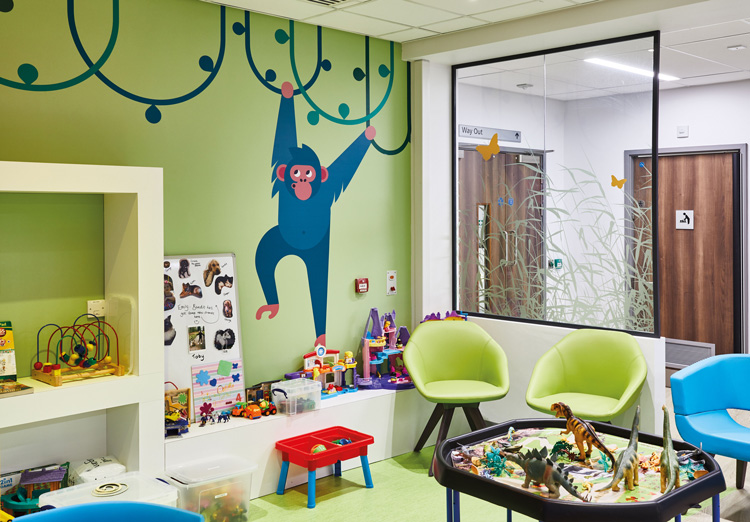 The room involves role-play toys, where children can put dolls in miniature CT scanners and proton beam machines to learn the process of therapy.

The magnetic wall features animals, and children will soon be able to use prop-style magnets to decorate the characters, including nurses’ and doctors’ uniforms, intravenous (IV) drips and face-masks used by patients. The aim is to help them relate to the characters and develop their own personal “avatars”, says O’Donoghue.

“The whole cancer therapy process can be quite distressing,” she adds. “We wanted to make the experience as stress-free and relatable for children as possible — a story they could immerse themselves in and take a bit of joy from. It’s transforming the cold, clinical white walls into something much friendlier, a safe space.” 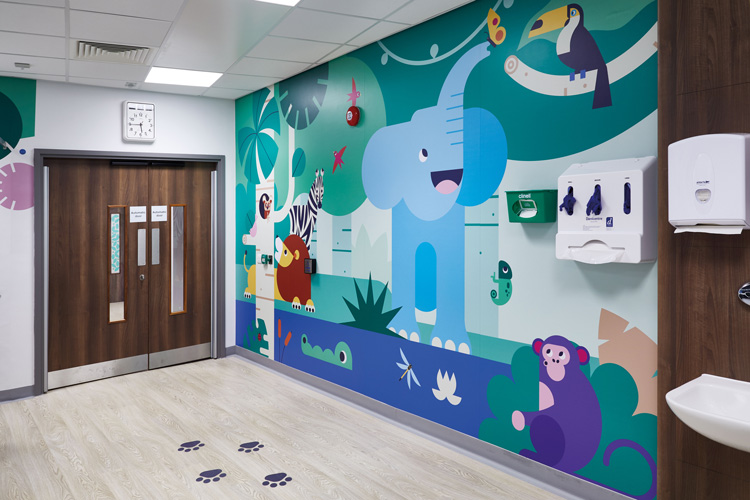 The wall illustrations are in a flat graphic style, which Bowyer first drew by hand then refined digitally through Adobe Illustrator.

On her characters, she says they adopt a “geometric style made up of simple shapes”, and incorporate a mix of “bold, primary colours and muted, pastel shades”.

She adds that she purposefully “anthropomorphised” the characters — gave them human characteristics, such as big eyes — to help make them more appealing. 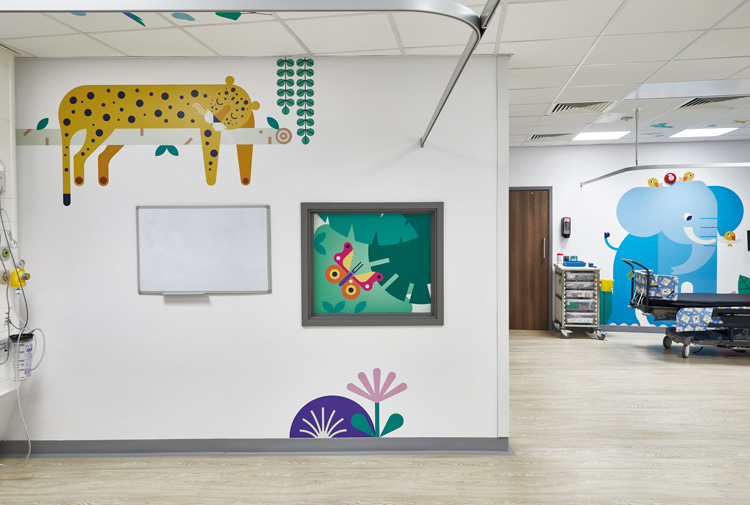 “I think the use of art and supergraphics within clinical environments can make a huge difference to how people interact and feel in those spaces,” she says.

O’Donaghue adds on Bowyer’s style: “It’s not cartoonish or cheesy – the colours are lovely and calming, rather than bright, garish and in your face. She draws simply but there is lots of character to her work, with subtle details, such as the monkey pulling a funny face, or the elephants looking up at the birds that surround it. She’s brought things together to tell a story.”

The project took roughly six months to complete, and Music has been involved in projects with The Christie for the last 10 years. 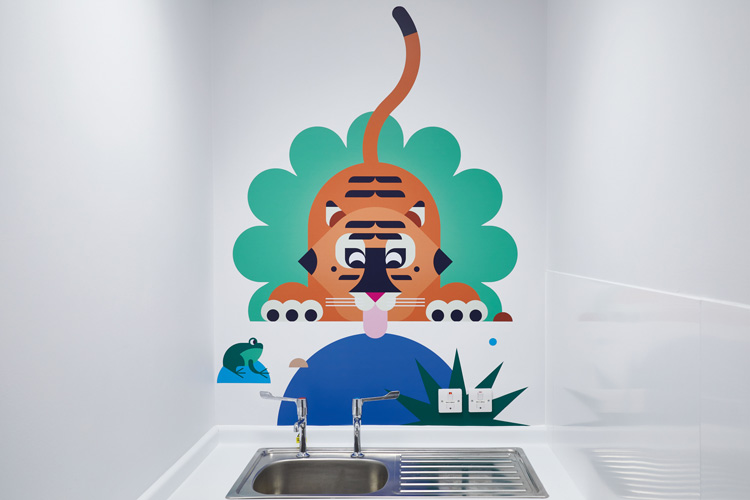 Music commissioned Jane Bowyer, with O’Donaghue adding that it was important for both the studio and illustrator to be “local” to The Christie, so based in Manchester.

The proton beam therapy centre has now opened. Music is currently developing a full suite of magnets, which will be used alongside the magnetic wall in the specialist play room. 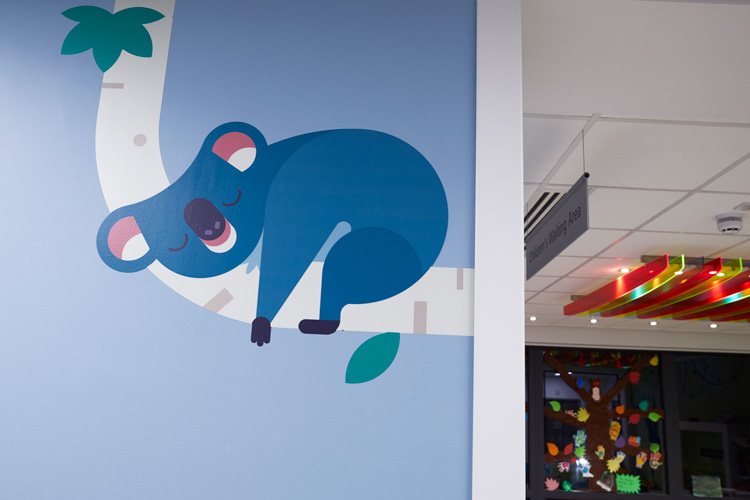