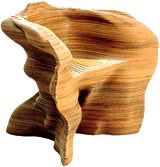 Britain has always prided itself on its oddities, yet the discrepancy between a creative culture that’s the envy of the world and a manufacturing industry seemingly stuck in the past remains one of our most frustrating eccentricities.

Far from putting designers off, though, it seems that Britain is attracting more ambitious young designers than ever before and the reason for this, suggests a new exhibition at the Crafts Council, is the relatively recent emergence of the so-called designer-maker. Titled An Industry of One, the exhibition, curated by David Redhead, charts the rise since the 1980s of British-based designers who have refused to undersell themselves to the commercial furniture industry and opted, instead, to go it alone. It might seem a romantic notion, but as any designers who have pursued this route will tell you, it can be an extremely testing experience.

“It looks easy in the magazines, or if you see designers at private views,” says Nick Crosbie, who established Inflate with Mark and Michael Sodeau in 1995, immediately after completing the Industrial Design course at the Royal College of Art. “But next morning you have to get up with a hangover and work bloody hard.” Now a visiting tutor at the RCA, Crosbie, who makes sure most of Inflate’s profits are put back into the company, is “constantly trying to explain to students what it’s like in the real world”.

Similarly, the 26-year-old designer Hector Serrano, a recent graduate from the RCA, remembers his tutor Roberto Feo (of the critically acclaimed London-based Spanish design trio El Ultimo Grito) warning him against going it alone. “Yes, he said don’t do it!” says Serrano. But such warnings and serious financial anxieties weren’t enough to stop him swapping his job at Ideo for the opportunity of setting up his own small workshop at home. “I needed to keep my individuality and the freedom to do exactly what I wanted to do,” he says. And, being accustomed to the loosest of structures at the RCA’s Design Products MA, “where you set your own briefs, have your own objectives”, Serrano found it frustrating operating within a larger company. His decision to quit Ideo looked to have paid off last year when he won the 16 000 Peugeot Design Award and saw his Superpatata light picked up by Dutch group Droog Design. But he reveals that he still has nothing approaching “a secure income”.

Jane Atfield, an RCA graduate of an earlier generation, was another who refused to join a large organisation and opted instead to become “an industry of one”. She started her own company Made of Waste, emphasising that such a decision was partly a lifestyle choice. “It depends where your priorities lie, I always wanted to have my own ideas and be innovative,” she says. “Plus, I’ve never had to work for people I don’t like.” Yet, looking back, she has reservations about the wisdom of her choice. “I’ve got terribly undisciplined,” she admits, “And sometimes it’s difficult to keep driving yourself. But when I graduated [in 1992, along with others including Andrew Stafford and Michael Marriott], there was a strong feeling that you could make your way, that you could have fun developing things.” At the time Ron Arad, Tom Dixon and Jasper Morrison, the three designers that Redhead identifies in An Industry of One as integral to the establishment of the designer-maker phenomenon, were reaching the crest of their acclaim.

It’s hardly coincidence either, that the designs of the “big three” have been largely manufactured abroad. Britain has nothing to challenge the supremacy of Italian, Spanish, German and even American manufacturers, despite inroads being made into improving such a non-sensical situation. Improvements have been made, largely because the volume of designers has demanded it. In Inflate’s case, the founders decided that “the only way to survive was to buy our own machinery”, which they did; consequently, up to 80 per cent of Inflate’s 1.2m annual turnover now comes from manufacturing and consultancy.

“There was a time,” says Crosbie, “when Alessi wanted to take over our product range. But we realised that would make us broke in six months. It was then I decided that we’d never sell out to another company.” Neither did Crosbie want to become “a British designer used for PR purposes” by a manufacturer, as he saw happening to some of his predecessors.

Elsewhere, London furniture manufacturer SCP has at last begun to reap the rewards of its investment in British-trained talent. Small companies such as Keen and Innermost, run by Steve Jones to produce low-cost accessories and lights by young designers, have started to capitalise on the obvious potential.

Charles Keen, who, significantly, spent a period of time as the UK managing director of the ever-progressive German company Vitra, proclaims himself “loathe to raise a Union Jack” over his company. Yet he believes strongly that “the creative culture here has been under-used by manufacturers”. A man passionate about design quality, Keen can understand why designers sometimes “resist the requirements” of manufacturers. “They get so bludgeoned by commercialisation,” he says. “Very often you see a piece of furniture and know there’s only an accountant in there.” Keen himself has ensured he has commissioned pieces, by Thomas Heatherwick and Mathias Bengtsson (another recent RCA graduate) in particular, that have an “inherent spirit”.

But despite this seemingly sympathetic attitude towards designer-makers, there is also a degree of empathy from Keen for his fellow British manufacturers. “A lot of young designers come out of college with a good portfolio and expect to be picked up immediately,” he says. “I think the industry is quite shy due to this prima donna tendency.” Paul Newman, who until recently ran and owned the manufacturing and retail company Aero, is someone used to being approached by graduates. Many of them, he says, have had “hot air blown up them. They would come to us with products heavily influenced by what they’d seen in the design press. I’m sure I made those mistakes when I started out but you just want to tell them it’s bollocks”.

With Aero now under new ownership, Newman is relishing the chance of forgetting about operational responsibilities and getting back to the drawing board with his new company, Newman & Kamali. He has long since put the desire to actually make behind him.

Of course, many designers do not actually want to be makers. Some, such as Ron Arad, clearly relish the hands-on aspect but few designer-makers would reject the offer of a manufacturer taking on their products. Often the only option available, though, is self-making for those that refuse to compromise. What designers will often do, as Redhead points out in his An Industry of One catalogue, is “subsidise signal pieces intended for one-off purchase” by “focusing on accessories” that can be easily self-made or manufactured.

“The giftware market is a good place to start,” says Newman, who knows from experience that people will baulk at shelling out for a sofa looking even slightly out-of-the-ordinary, but will pay for a personality-led accessory. For Atfield itis clear that designers “need to be successful commercially before attempting to sell more experimental work”. Accordingly, her new company, Up, will follow its success with its initial output of tea towels with bigger, more expensive products.

Even developing designs for accessories, though, can be a significant struggle for a designer-maker. As any graduate will have experienced, after leaving college you are without workshops, without tutors and, more often than not, without a job. Financial grants are hard to come by in Britain, with the Crafts Council’s Setting Up Scheme being about the only resource to turn to. Consisting of 2500 towards maintenance and a maximum of 5000 for equipment, leading designer makers such as Tom Dixon, Gitta Gschwendtner, Tom Kirk, Jhan Stanley, Emma Jeffs, Michael Anastassieades, Carl Clerkin and William Warren have made full use of the scheme.

But money is not all an ambitious designer needs. Offering advice, talks and suggestions, the Crafts Council has also been active on the non-financial side. “They were very supportive,” says Atfield, who also teaches (as many other designer-makers do) to supplement her income.

Redhead suggests that the Crafts Council’s importance cannot be underestimated. Beyond the practical there is also what Serrano refers to as “psychological support”, the sort of back-up that keeps you believing in your work. At college this comes from tutors or fellow students, but out in the real world it is harder to come by unless, as many graduates do, you join forces. Serrano believes that working with friends, as he did with Alberto and Raky Martinez (both RCA graduates) on the development of a new bottle-cum-jug, can make things easier “because when one is down the other one is helping”.

It’s sometimes easy to forget, among the moans surrounding our manufacturing industry, that Britain has a fantastically creative, can-do culture. And we have “a pretty sophisticated retail market” too, as Newman points out. Nowhere else will you find as many specialist design shops willing to stock more experimental designs than in London.

“We often don’t realise how hard it is elsewhere,” says Keen. Serrano, a Spaniard, agrees. Adding, “There are more people to see and understand your work here than in Spain. You get more general interest from the press, too,” he says. “There’s nowhere more free-thinking than Britain,” says Redhead, so it’s no surprise that designers in Britain feel the confidence to become industries of one. Against all the odds, the designer-maker seems to have become an important, triumphant part of our culture.

An Industry of One is at the Crafts Council, 44a Pentonville Road, London N1, from 1 February to 25 March. Admission is free