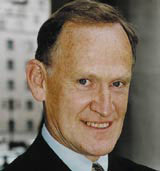 It may have been the ‘Greatest Balancing Act of Our Time’ as the Financial Times poster proclaimed, but last week’s budget provided some comfort for design consultancies, albeit a trickle.

If correct, Chancellor Gordon Brown’s sums pave the way for a strengthening economic outlook in the UK, as long as consumer spending doesn’t go off the boil. Forget Martin Sorrell’s wearisome bathroom allusions, Brown’s growth forecast of between 3 and 3.5 per cent this year would prove to be a healthy tonic for the marketing services sector, even if borrowing is rising to help fund it.

The latest retail spending figures released last week seem to show increasing shopper euphoria. UK sales volumes are growing by 1.9 per cent year-on-year, on the basis of the last three months, though the jury is still out as to whether or not the trend is anything more than a temporary blip.

Aside from an optimistic set of economic fundamentals, the Chancellor’s budget was, on the whole though, rather business neutral.

‘This budget was more political than economic,’ says Results Business Consulting managing director Jim Surguy. ‘For smaller businesses there were only three areas of any real interest. The VAT threshold has been raised to £58 000; for companies that buy, rather than lease capital equipment, capital allowances have been increased from 40 per cent to 50 per cent – but this will only apply for the next 12 months; finally and more interestingly the Chancellor has closed what he is pleased to call a “loophole”,’ Surguy explains.

‘The Chancellor has changed the nil rate band meaning that small companies will now be taxed on distributed profits at 19 per cent. Previously, the first £10 000 of profits were tax free, regardless of whether they were taken as dividends or left in the business. This will directly increase the tax liabilities of any company whose profits are up to £50 000, depending on the extent that they pay out dividends,’ Surguy adds.

‘Since hundreds of thousands of small companies incorporated themselves as limited companies to take advantage of the low tax on dividends, this new twist will affect very large numbers of sole traders and small businesses in the design sector and across the marketing communications industry,’ he says.

The question of Britain’s entry into the European Exchange rate mechanism, which will certainly have an important impact on the European market for design consultancy services, has again been deferred – most likely until after the next election.

A healthy growth forecast of 3 to 3.5 per cent, up from 2.3 per cent last year, should be good news for the design sector.

Over past two years sterling has risen against the dollar and, despite falling for a time, is back to the same rate against the Euro (â‚¬1 = £0.68). This has been good for exporters to Europe, though it demonstrates an alignment of European currencies over the longer term. The falling dollar means imports – including US consultancy services for UK clients – are cheaper.