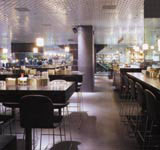 Theory has it that we emerged from a terrible Dark Age in the 1950s, when prototype celebrity chef Elizabeth David returned from the Mediterranean and filled our culinary lives with colour, flavour and sheer sexiness, proving that food could be fun, it didn’t have to be simply sustenance. Unfortunately, the traditional UK food halls of her day weren’t geared up to deliver this experience.

Fast forward 50 years. The grand array of butchers, bakers and hamper fillers that once defined the pinnacle of food retailing in the UK have been replaced with experiences which link eating to just about every other aspect of life. Enter the modern food hall and luxury supermarket – where restaurants, fashion and food collide.

‘Higher-end’ food retailing has become more and more fashionable and profitable in recent years: House of Fraser’s World of Food concept by Kinnersley Kent in Birmingham is a testament to this trend. Revisiting its food hall heritage, House of Fraser has now re-instated food as one of its key focal points. Incorporating the very best of world cuisine in a modern and approachable setting, the sleek, contemporary design is enhanced by the generosity of space and a slightly hi-tech feel. This first venture appears to be just the starting point. A specially designed own line of HoF branded food, with appropriately stylish packaging, would suggest it’s going to be a serious player.

Own-brand developments aside, some department stores bring in and dispose of branded restaurant names from their food halls faster than they change their fashion brands. Take Selfridges. Here, Pret A Manger, Eat, Yo Sushi – all members of the UK ‘nouvelle vague’ of high quality fast food – come and go as if they were cosmetics brands. One of the latest arrivals is Edible, which really tests foodies’ palettes to the limit. Selling everything from chocolate-coated scorpions to smoked rattlesnakes, it is a perfect fit for the Selfridges brand – edgy fashion meets edgy food.

Including specialist food offerings as a core part of their fashion proposition can enhance and reinforce the unique position and role that department stores enjoy. In fact, food these days moves as fast, if not faster than fashion. Harvey Nichols knew this when it created its now legendary Fifth Floor. Half the time you couldn’t tell what was inside the packaging, but it didn’t matter, because it all looked so good. The champagne bar, the restaurant and brasserie are all planned as a complex matrix of status and social standards to be untangled.

Outside the UK, a new generation of food hall is evolving. One of Europe’s oldest department store groups, Globus, has recently unveiled its chic new standalone food hall in Zurich by Brunner Eisenhut Gisi Architects. Branded Globus Delicatessa, it is a three-level food and eating emporium and has become one of the best food destinations in the city.

Meanwhile, in a snow-lined valley in Austria’s Tyrol, the new Maxi Markt food hall by JHP is a vast standalone emporium conceived as food’s answer to Ikea. The customer’s journey through the store is planned to ensure that they pass every product before they pay and leave. There are no short cuts; it’s a one way total exposure experience.

The regeneration of food halls and gastro emporiums has coincided with a huge increase in consumer fascination in the origin, quality and even spirituality of food – just look at the number of farmers markets in major UK cities and the regeneration of London’s Borough Market in particular. There are some phenomenally successful brands in this sector, such as the Fresh and Wild chain, that despite its prices looks set to extend the hip organic food hall across the length and breadth of the UK.

Food halls cross the line between need and luxury, they have always been an indulgent experience, and are very different beasts to supermarkets. But supermarkets are getting in on the food retail-as-theatre act, too.

The new Waitrose food and home concept in Canary Wharf, designed by JHP, recognises three modern customer types: ‘the cooks from scratch’, the ‘little helpers’ who need to feel they’ve taken part in the preparation of their meal and the ‘catered for’ who just want to get something great to eat now. The key issue here is that Waitrose recognises that we can be all these people at different times.

The Waitrose concept even extends into the kit of the kitchen itself. The food hall is planned in great, interlinked concentric circles. At the centre is the dining room itself, along with a tableware section stocked with every conceivable cooking gadget (all from sister company John Lewis Partnership). In the next ring are the raw ingredients, fresh produce, meat and fish. Next are the semi-prepared meals, stir-fry sets and seafood bakes. Finally, you have the eat-on-the-spot facilities, the steak and oyster bar, the sushi counter, and the wood-fired pizzas near the olive oils.

So where did the transformation of food halls and supermarkets start? Certain design reference points turn up in presentation after presentation. One of these is the food hall in the KaDeWe department store in the former West Berlin, designed by now defunct Ernsting & Partners. For as many years as anyone can remember it has offered the freshest raw ingredients and then in the same space used them to prepare fabulous dishes for customers to eat on the spot – pure retail theatre.

Another benchmark across the Atlantic – the New York epicentre of culinary excellence – is Dean & De Luca, designed in-house. It now boasts 13 stores and cafÃ©s throughout the US, including a presence in The Paramount Hotel, plus two recently opened stores in Tokyo. Acting as culinary curators, the chain still inspires and celebrates all that is stylish in food against a clean and simple backdrop reminiscent of modern fashion outlets. It has generated numerous imitators and admirers even in supermarkets and convenience stores, including the much talked about Deli De Luca stores in Oslo, whose round the clock offers are positioned in only the most select locations.

Arguably the finest food hall around? Woodlands Market, Ross California. Find it if you can. Mind you, Fortnum & Mason still knocks up a pretty good hamper.