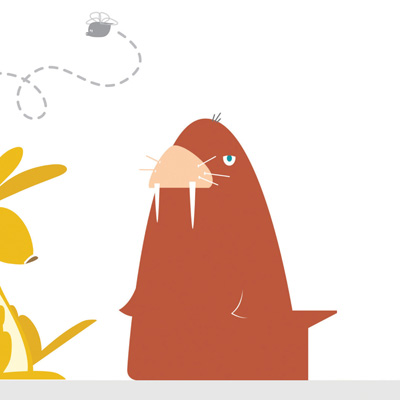 Landor Associates has created a wayfinding system which will be used across the site of Great Ormond Street children’s hospital in London.

The system is inspired by the natural world and, as well as providing a wayfinding function, aims to offer a fun and welcoming environment for the children.

The wayfinding will begin to roll out in 2012, when it will be used in a new clinical building designed by architect Llewelyn Davies Yeang, which is set to open as part of a redevelopment of the hospital site.

Landor was appointed directly to the work in 2008 after being approached by the Great Ormond Street Hospital Children’s Charity, according to Landor design director Carl Halksworth. The consultancy has worked on the project on a pro-bono basis.

Halksworth says, ’The Great Ormond Street estate had grown organically – with inter-connected corridors, for example – and had developed to the point where guiding people around the site had become very difficult.’

He adds, ’It was very much a forward-looking brief – not only to work on the current buildings, but also to integrate future buildings into the system.’

The idea of using the wayfinding as a distracting and therapeutic system was put at the heart of the brief, says Halksworth. He says the consultancy consulted children in the development of the project and used the Great Ormond Street principle of ’the child comes first’.

Landor settled on the natural world as a theme. Halksworth says, ’It’s endless, endlessly inspiring and means we can fold in some of the existing elements in the hospital.’ Some of the wards at the hospital are already named after animals and Halksworth says these were the most popular among the children.

As part of the system, each floor of a building is given a natural world theme, with the lower-ground floor being the ocean, for example, and the top floor being the skies. Each room within these floors is named after an animal that lives in that habitat.

Landor has provided a set of animal names for use as part of the wayfinding that have been tested with children to avoid any with negative cultural connotations.

The animals will be used in iconic form on signage and Halksworth says, ’Where they will really come to life is where they are used as a distraction – for example, as a mural on a wall. There are lots of potential touchpoints, such as digital ones.’

Halksworth says, ’The real nirvana with this project would be to create something like The Simpsons, which appeals to different age-groups on different levels.’

Lesley Miles, director of marketing for Great Ormond Street Hospital Children’s Charity, says, ’[The project] met the exact brief we supplied, in that it provides clear direction for visitors to find their way around the hospital, and charming and welcome distraction for our very young patients and their families.’

Sheffield conference aims to explore the art of sketching