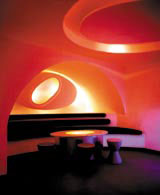 With non-alcoholic nightclubs set to reach Europe in a couple of years’ time, Sarah Balmond wonders if they will ever be embraced in Britain

Walls rise and fall to music, psychic kinetic lighting traces the crowd and a whirr of projections flash the clubbers. Negotiating around a morphic-looking landscape, you touch a heat-sensitive wall. It melts into a kaleidoscope of colours. You cross the dancefloor, hustling through a space that’s all moving edges and rising platforms, to reach the bar where you order an orange juice. Or a coffee. Anything but booze. For this otherworldly place is, in fact, a non-alcoholic nightclub, where design alone is used to intoxicate the clubber and draw them into a fantasy land.

While many Britons are likely to shun this sort of leisure space at first – a club with no alcohol is like a pub with no beer and could prove unpopular – there is a growing demand for an alternative type of night out, and this, coupled with an emerging health-conscious generation, could make non-alcoholic clubs a credible substitute.

Heineken is already testing the water and is thought to be planning the launch of its first international chain of non-alcoholic clubs, branded So (DW 15 December 2005). This unusual brand extension project will potentially see a raft of nightclubs rolled out within the Middle East and the Far East, where there is little in the way of a drinking culture, for religious reasons. A site in Beirut, in the Lebanon, is on the cards and the intention is to launch more throughout Europe in a couple of years’ time.

Heineken has appointed Keane Brands to draw up interior concepts and a visual identity for the chain. A major challenge will be to create an ‘unreality’ type of environment, providing an unforgettable experience which will keep the clubbers coming back for more, without the lure of a happy hour. Alcohol provides escapism and the interior design of non-alcoholic clubs must work to the same brief, transporting the visitor to another world.

Jon Legge, director of Bulldog Design, thinks non-alcoholic clubs should look to the 1960s dance scene for inspiration, drawing from a time when optokinetic and psychedelic colour wheels were manipulated to create fanciful and imaginative interiors. Bulldog Design has created the interiors for a host of prestigious nightclubs, including Stringfellows, the Hippodrome and Pacha London.

‘The clubs during that era created very interesting atmospheres that were surreal and decadent, conjuring up images of suave men, scantily-clad girls and pole dancers. It was about engaging the imagination to entertain. These kinds of clubs will have to do that,’ he explains.

Non-alcoholic clubs could, however, become meccas for drug-taking, given their ‘mind-bending’ interiors. Legge believes Heineken will have to create affordable and functional design solutions to deter such criminal activity.

‘When designing these kinds of interiors, we are developing leisure spaces for large crowds of people and flirting with danger all the time,’ he says.

Despite this, Legge has faith in the prospect of integrating non-alcoholic clubs into the UK’s social scene and believes they ‘could be a shot in the arm’ for an industry which has grown tired. ‘Britain is wide open for something new. There are so many boring clubs and registered rubbish clubs out there. People will have to be re-educated,’ he adds.

Martin Vicker is director at Nottingham-based Lief Design, which has designed nightclubs like The Bomb in Nottingham and Babushka in Manchester. He believes non-alcoholic clubs should be thought of as ‘late night installation environments’, rather than a disco with no alcohol.

‘Perhaps nightclub is not the right word to describe these kinds of venues. This is a different socialising concept, a special space which can offer a totally escapist world. You can challenge the senses and introduce a fantasy environment that can perform like a nightclub,’ he explains.

Vicker refers to moulded interiors, landscape colour zones, dens filled with projections, slopes and sensual experiences – all playful possibilities, given the fact that there will be no alcohol on site.

‘Crazy concepts and drunk people don’t really work. With sober people, you can create a more engaging and interactive area,’ he adds.

To add points of interest, iPod, mobile and digital photographic technology could be worked into the club interiors, replacing dancing with an altogether more cerebral activity.

Tim Mutton, co-founder of Blacksheep, the consultancy behind the much-hyped Cuckoo Club, thinks this mix of interactive elements would create memorable interiors, but warns that branded nightclubs are in danger of becoming ‘more of a McDonald’s experience’.

Clubs are only ever as good as the crowd, and more people are demanding bespoke, personal environments – a stark contrast to the bleak box structure of the 1980s superclub. However, given the highly fickle nature of the clubbing world, where consumers are as promiscuous with their venue choice as they are with their fashion, trends could point to the proliferation of non-alcoholic clubs as well. Whether or not these would be considered to be nightclubs, in the traditional sense, remains to be seen, but design experimentation is a certainty.

• Heineken conceives So, a brand of clubs that do not serve alcohol

• Offers potential with the youth market, Islamic markets and alternative adult markets in the West

• Initial launch envisaged for Middle East and Far East, with future roll out across Europe thought to be in the pipeline

RHM should improve the cakes, not the packaging

Rem Koolhaas and the Office for Metropolitan Architecture

Use of stereotype was discrimination against Scotsmen

Idents and print materials for this year’s Brit Awards