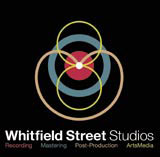 Whitfield Street Studios, one of the UK’s most renowned recording and production venues, is revealing a redrawn identity and website, created by Carter Wong Tomlin, to bolster an ambitious growth strategy.

The recording studio, which counts artists such as Madonna, Kylie Minogue and Led Zeppelin as recent clients, is seeking to create a brand that can be evolved and applied to the company as it expands into a group business and other key areas, such as film and sound. Carter Wong Tomlin was appointed last October following a four-way pitch. The project is estimated to be worth a five-figure fee.

The identity, which uses microphone response patterns to create a logo, is colour-coded to potentially brand different areas of the business as it grows.

It will run across stationery, signage, DVDs and a website, www.whitfield-street.com. The arcs of colour are animated for numerous digital applications and they form a major component of the website’s structure, says a spokesman at Carter Wong Tomlin. The site also features black and white photography and a square format with a vinyl design.

‘We have large plans for the expansion of the business and the new brand will inform the whole design,’ says David Anderson, chief executive at Whitfield Street Studios.

‘Carter Wong Tomlin responded to the brief in a way that both acknowledged the history of the building and the current dynamic of the company,’ he adds.

The recording company is currently looking to ‘change the use of the space’ and is in the throes of a pitch to appoint an acoustic designer to create new studios. It will also consider hiring an interior designer to develop the internal spaces, says Anderson.

Camel to spark up brand with global design projects

The Team steps in with National Ballet identity