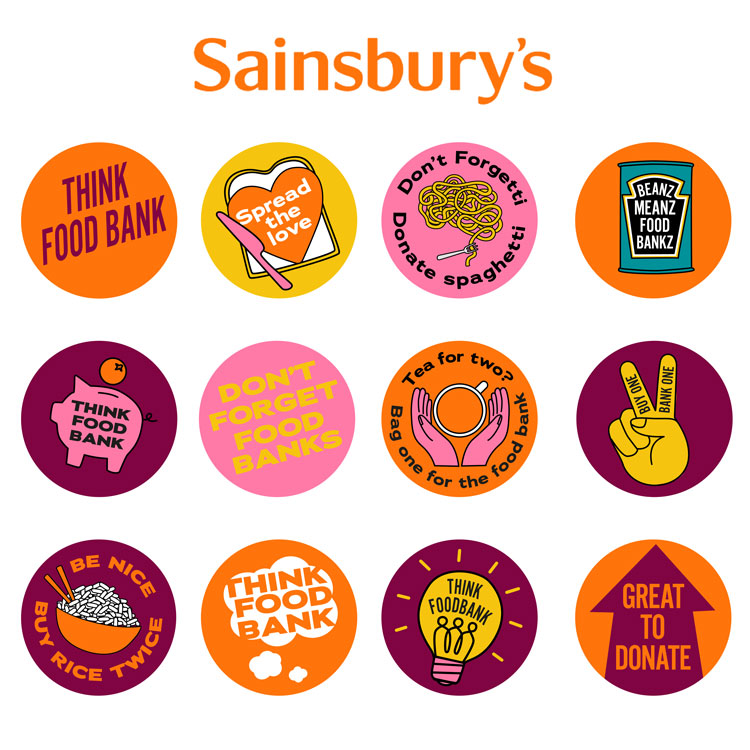 With an uncertain winter looming, the Trussell Trust is predicting a 61% increase in demand for food banks in the coming months. The news comes at a time when organisations are already stretched to their limit dealing with families in crisis because of the pandemic.

Maisie Benson and Holly Kielty, designers at B&B Studio and Design Bridge respectively, are “going guerrilla” in an attempt to help. The pair have designed a collection of stickers which they’re asking members of the public to place around their local supermarkets.

Each comes with an encouragement to shoppers to buy two of something in their basket, and then donate the spare to a local food bank. Special stickers have been designed to highlight items food banks need the most, like tinned goods, tea and rice. Additionally, the pair have created the collection in several different colourways to match the colour schemes of brands like Tesco and Sainsbury’s.

The appeal of vinyl and record players has endured well into the age of streaming, but the latest project from the Secret 7” anonymous charity record sale sees turntables as something beyond a piece of musical equipment.

As part of the auction, the organisation has invited a series of designers to use the Rega Planar 1 as a canvas for their distinct creative styles. Morag Myerscough and Sir Paul Smith are among the creatives involved, who were tasked with an open brief to “repurpose and recondition the turntable into a novel piece of art”.

Myerscough and Smith have both used acrylic to adorn their turntables in their signature bright patterns – the former with colourful geometric shapes (pictured) and the latter with muted “artist stripes”. Elsewhere, Tony Hung and Haroon Mirza have used lighting to redesign their canvases. All 15 turntables will be available to see in an exhibition at Greenwich’s NOW Gallery, before being auctioned off next month in aid of the charity Help Refugees. 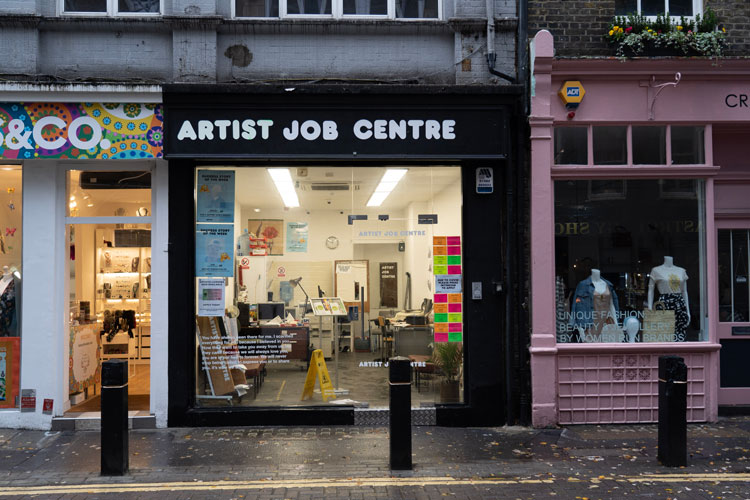 Among the headlines this month was news the UK government was encouraging out of work artists to retrain in new industries. In his signature playful style, artist Stuart Semple reacted to the move with an installation in London’s West End.

The Artist Job Centre is a reminder that the country’s creatives face an existential threat in the wake of the pandemic, but true to his tongue-in-cheek approach, Semple has approached the topic with good humour.

A pared back store front invites passers-by to browse the job retraining opportunities on offer. Such roles range from potato handler, to carrot quality control expert and envelope licker. COVID restrictions mean there’s no opportunity to enquire within, but if anything stands out, visitors are asked to film their reaction and share it with the artist – just ring the bell to apply… 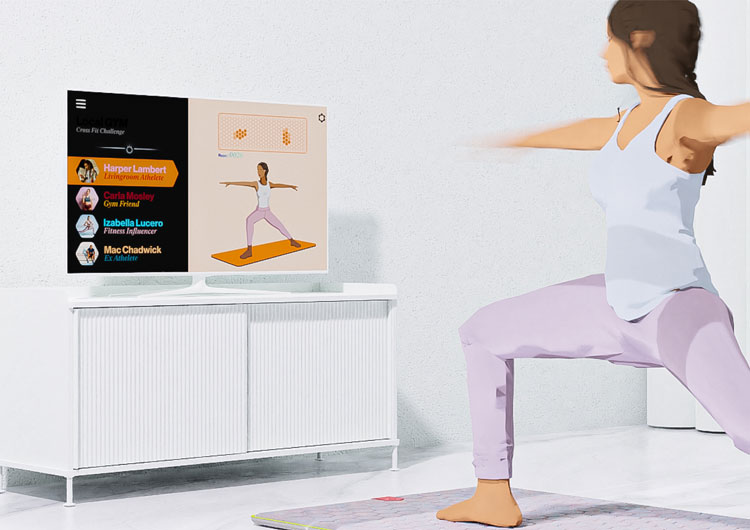 Along with sourdough and Tiger King, at-home workouts were the staple of many lives in early-lockdown Britain. But now seven months into the pandemic and with gyms reopened, Seymourpowell asks if we need to reconsider our exercise habits and move beyond our old “normal”.

The design consultancy has unveiled a smart gym mat concept, which it says explores how technology and AI might could provide connected workouts outside of the gym. The design features smart sensors which measure the position, weight, speed and power of the user, allowing instructors to give guidance wherever they may be.

Because the studio envisages many would use their mat from home, the team was keen to add in social features where possible. Advice from coaches could be provided one to one, or through classes with multiple participants thanks to the mat’s broadcast capabilities and gamified features.

Stamp Out 2020, by John McNeil Studio 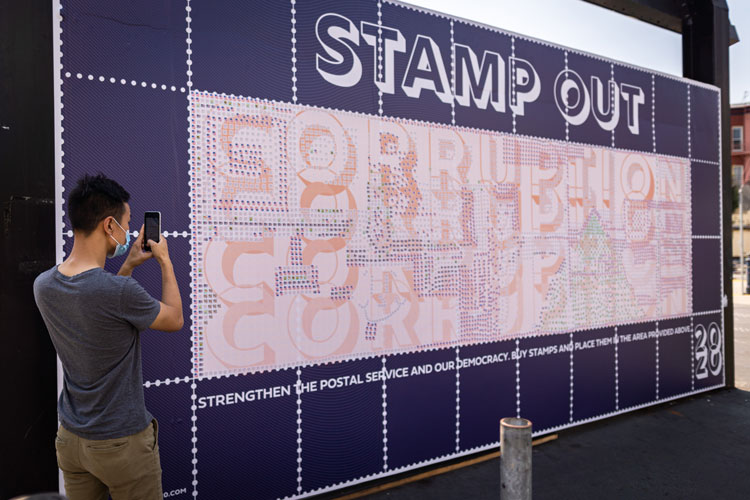 The 2020 US presidential election is fast approaching. Back in the Summer President Donald Trump made it clear he was seeking to defund the USPS, with many believing this was to pre-emptively challenge postal votes ahead of polling day.

Voters rallied around the USPS in retaliation, and a project from San Francisco-based design team John McNeil Studio looked to bolster the protest this month. Stamp Out 2020 is an interactive mural, calling for the local city community to “stamp out” corruption in the forthcoming election.

It asks voters to purchase and add their official USPS stamps to the installation, raising money for the postal service while also sending an important message on democracy and community in the process.

Posters of different sizes have been distributed and put up in different locations to further the cause as much as possible.

The coronavirus pandemic has ensured that trick-or-treating is decidedly off the menu for Halloween in 2020. But as creative technology studio Rehab says, there have been far too many “tricks” this year, and not nearly enough treats.

Not wanting the children of the UK to go without entirely, the Rehab team has unveiled an augmented reality gaming experience to take the place of the popular family pastime. Treat Street allows users to collect and discover 3D AR “treats” and avoid “tricks” in their local neighbourhoods via their smartphone cameras.

Treats include floating pumpkins and cauldrons, while ghouls and zombies tricks are to be avoided. The studio says the game is an example of how technology can offer safe interactions during end of year festivities, which will all likely be impacted by COVID-19.

For the past year, film magazine Little White Lies has been working away at a series of monograph books. This past month, the team unveiled that its latest title is dedicated to the work of director, producer and screenwriter Paul Thomas Anderson.

Appropriately psychedelic in its look, the book has been written by film critic Adam Nayman and designed in-house. Alongside essays into Anderson’s work, it features illustrations from the likes of Laura Callaghan, Shyama Golden and Alice Tye, as well as archival photos and stills from his full filmography.

All of Anderson’s films to date are covered, with each receiving a design treatment that honours its content. Embroidery-inspired graphics have been used in discussions on Phantom Thread, while letterpress is used for The Master and screenprint for Boogie Nights.