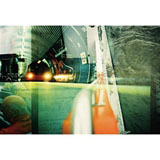 Lomo is unveiling the Trading Places Lomo Wall at London’s Royal Festival Hall this week. The mural is made up of Lomo-style photographs taken by local residents to create a living portrait of their lives. 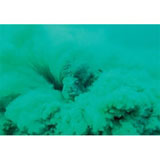 Mark Humphrey has completed the B001 Bed & Cocktail – a free-standing bed with motorised cocktail bar, fold-away storage plus a micro-office with Internet access.

This photograph of a walrus whipping up the sediment at the bottom of the sea as it feeds on shells has won the Shell Wildlife Photographer of the Year 2006 competition for Sweden’s Göran Ehlmé. The exhibition will run at the Natural History Museum, London, until the end of April 2007.

Manha has designed this invitation to New London Architecture’s London’s Moving exhibition, which opens at the NLA, 26 Store Street, London W1, on 1 November. 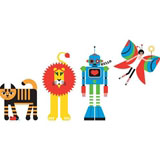 These colourful characters by Clifford Richards will be applied to a range of merchandise sold exclusively in the Victoria & Albert Museum’s Museum of Childhood, due to reopen on 9 December, following a £4.7m revamp.

UK environmental charity Green Alliance is to relaunch its corporate identity this week, with a design by Howdy. The logo is an update of the original identity, created by Interbrand in 1998.