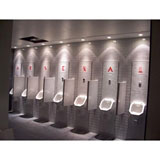 Lavatories are coming out of the water closet, with clients willing to spend far more than a penny and designers lavishing the same attention to detail on them as on any other interior project. Trish Lorenz tries out some of the swankiest loos in town

Public toilets aren’t generally associated with high design – at best they are functional and clean, at worst dank and disgusting. But all that looks set to change. Toilets are about to become statement pieces in their own right and the days of the dodgy public loo might just be gone for good.

Last month, architect SMC Alsop received planning permission for a public toilet in London’s Peckham Square. Funded by Southwark Council, it is about as far removed from a functional block as you can get. An undulating 8m-high tube, made of cone-shaped pieces and with a subtle, shifting geometry, it is capped by a 1.5m lantern (or window) that will allow people to see the sky while using the facilities. Inside is a standard toilet with full disabled access, basins and nappy-changing facilities. The practice has yet to decide on material for the exterior, but it’s likely to be either Cor-ten steel, which has a rusting effect, or highly polished and colourful reinforced plastic. According to SMC Alsop project architect Jonathan Leah, the idea was to create ‘a sculptural object for the square’.

‘It’s a different approach to a utilitarian object. It’s deliberately not tucked away or hidden,’ says Leah. ‘We saw this as a chance to put a piece of art in the square and it will be quite a strident piece.’

This summer saw a revolution in public toilets in Paris, too. On 1 July, PointWC opened at 26 Champs-Elysées, offering luxurious surroundings for ‘une pause pipi’. Some 200 users per day have been paying the €1 fee to enter an oasis that’s nothing like an ordinary public loo. The brainchild of Eric Salles, and with interiors by German designer Nina Virus, each toilet has a different theme – classic chic, ethnic, Zen, hi-tech – and designs change every six months. There’s also a ‘powder room’ for women that offers hotel-sized toiletries, ample mirrors and lighting, and a boutique shop selling bathroom products. Toilets are cleaned after every use and staff are smartly dressed.

‘A friend and I had the idea a year ago,’ explains Salles. ‘We travel a lot and there are never any clean and pleasant toilets. Here everything is designed to allow people to enjoy taking their time in a nice environment.’

Salles is tapping into a trend, says Seymour Powell director Dick Powell, who recently completed a project designing the toilet of the future for a TV programme. ‘Attitudes are changing,’ he says. ‘Today people are showing an interest in bathrooms as living spaces, ‹ not just functional spaces, and the sector has seen a lot of innovation.’

That innovation is particularly evident in upmarket restaurants and bars, where toilets have recently become key talking points. London’s Sketch started the craze with its infamous toilet pods, but it has been enthusiastically followed by a number of other venues.

According to 20/20 managing director Jim Thompson, toilets are ‘one of the most talked about areas in a bar or restaurant’. The group designed facilities at Arsenal’s Diamond Club, which targets wealthy football fans, and during the research phase toilets were consistently referred to as a vital part of the total experience. 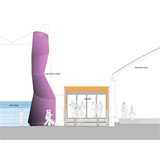 ‘Toilets are very important,’ says Thompson. ‘People pay for a top class experience and expect that attention to go through every detail, including the loo. A poor toilet will really downgrade perceptions.’

The group’s research also revealed that customers prefer to touch as little as possible in toilet areas, and the Diamond Club women’s toilets feature automated flush and sensor-activated taps, along with red lacquer doors inlaid with marquetry; granite floors and walls; and timber, granite and stainless steel finishes in the sink area. In the men’s toilets, 1930s-style, hexagonal urinals are a key feature. Toilets in both areas are ‘white cubes with timber seats’, says Thompson.

‘Toilets have to be in line with the rest of the interior specifications,’ says Concannon. ‘It’s not just about laminated cubicles any more – specifications are high across the board. Even at places like Nando’s we make sure there are high specification finishes, otherwise people feel disappointed.’

Toilets themselves are also seeing some radical enhancements, with the Japanese leading the way in innovation. In Japan, the Washlet is the country’s most popular loo. It incorporates a bidet in the seat with a myriad of possible adjustments, from pulse jets to blow drying. It is environmentally friendly, because no paper is involved and, according to Ascot Hygiene managing director Colin Davies, who distributes bidet toilet seats in the UK, offers a ‘more hygienic, cleaner and fresher’ approach than traditional toilets.

‘In Britain, we’re not particularly matter-of-fact about toilets. We tend to revert to humour when talking about them. But there is a growing groundswell of people who are catching on to [the Washlet style toilet] and understand that it is an alternative to the old fashioned way,’ says Davies.

Another development is Seymour Powell’s prototype, which, with the rim removed, makes for simpler cleaning. ‘Water enters through a valve in the hinge,’ explains Powell. ‘Women will like it because men have to put the seat down to flush. We used a macro-biological glaze on the seat that kills germs without the need for constant cleaning.’

There seems no doubt that toilets are coming out of the back room and into the spotlight. Leah believes the move is driven by a desire for beauty in every part of our life. ‘It’s important today that all parts of life are aesthetically pleasing,’ he says. ‘Local councils involve designers and artists in street furniture, railings and bollards projects, so why not toilets too?’ Marcel Duchamp would no doubt agree. 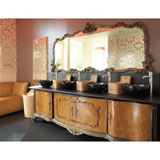 CellarDoor, Aldwych, London – based in an ex-public toilet and opening in December, the bar will feature hi-tech toilets with cubicle doors that turn from clear to opaque glass when locked

Crazy Bear, Fitzrovia, London – featuring glass-mirrored floors and hand basins that cross between male and female toilets, so you can reach through and shake hands with a stranger

Sketch, Soho, London – the restaurant that started it all, with space-age pod loos for you to enjoy