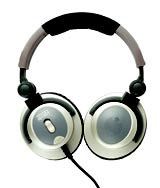 Branding joins hands with audio technology in these new DJ headphones which are launched this month. They are aimed at aspiring DJs and young, music and hi-fi literate consumers who have a respect for the Ministry of Sound’s brand.

Launched by low-profile manufacturer Path Group through its audio specialist brand Ixos, the headphones were put through their paces by DJ James Kearney. Kearney, who normally uses Seinheiser headphones and used to be a fan of Sony’s headphones, was DJing at Creative Review’s 20th anniversary party at The Scala in King’s Cross last week.

Kearney was impressed with their performance that night: “They definitely performed a function. My own headphones are on their last legs (so to speak), so it was a timely request to do a test drive. It was good to be able to use them as a pair or have one ‘phone folded up so as to improve monitoring. This led me to believe they had been designed with a club DJ in mind (rather than a bedroom DJ who has to keep the noise down).” They are comfortable, loud and well-designed, with a nice bag to put them in, he adds.

Designed, styled and packaged by The Brand Development Business in Henley-on-Thames, the group also worked with Path’s audio specialists. “They looked nice with two-tone colours, although it was dark in The Scala,” says Kearney. But with Seinheiser, Pioneer and Sony all doing a similar model, there is a convergence of styling with DJ headphones, he suggests.

The product is endorsed by the Ministry of Sound, and carries the club’s branding. This was seen as “crucial to giving these technically excellent products, from a relatively unknown manufacturer instant authority with their target audience”, according to a Brand Development Business spokesman.

However, Kearney, who does not perhaps qualify as the product’s target market, was not sold on the endorsement. “I wouldn’t necessarily go for a club-branded headphone, although the branding was definitely more discreet than I would have imagined, which is a good thing. I would like to try a pair of Ministry of Defence headphones (used in noisy bomb zones and the like).”

The three-strong range is to be expanded to five and will be available from the Ministry of Sound website (www.ministryofsound.co.uk), specialist DJ outlets and audio stores from mid-May. The DJ1001 (pictured) retails at £100