Though the Design Museum’s latest exhibition was set up in March, it only opens on 31 July. Work on Electronic: From Kraftwerk to The Chemical Brothers had  finished just before the museum was closed thanks to the lockdown. Since then, it’s been altered to allow for social distancing and the museum has established Safe and Sound procedures, like a reduced capacity (the museum is opening later to accommodate more visitors). Perhaps most important is a one-way system, with floor graphics from Studio LP to guide visitors around with arrows, much-needed at an exhibition which is both appropriately dark and loud.

The exhibition – the Design Museum’s first music-focused exhibition – sets out to explore electronic music’s origins as well as its “futurist dreams” and how it has impacted the world of design, fashion and art. It is is a transfer from Musée de la musique – Philharmonie de Paris, which took over the French capital in 2019. The UK edition puts a spotlight on this country’s electronic and rave culture, with over 400 related items and specially-designed installations.

It’s divided into four sections: Man and Woman Machine, Dancefloor, Mix and Remix, and Utopian Dreams and Ideals. It opens with an audio-visual timeline of electronic music, unchanged from the Paris show where visitors can plug in their headphones to hear samples through history. These personal headphone outlets occur throughout the exhibition. The first display sets the scene, taking visitors from the beginning of the 20th century when the “mad scientists of sound” experimented with product design by fusing electricity with musical instruments. It was in the 1980s that the “golden age of House and Techno” flourished in Chicago, Detroit and New York, and these three American cities feature heavily in the exhibition.

Rave culture has inspired some of the most recognisable graphic designs in recent history. As such, this is a significant focus of the exhibition. There is, for example, a poster display which includes studios’ designs for club campaigns, such as saving London club Fabric. There is also work from Abdul Qadim Haqq, a techno visual artist who created a graphic novel based on the stories in the album sleeve notes of Detroit’s electro duo Drexciya. An image of The Book of Drexicya is blown up large in the exhibition and sets the tone for the eye-catching, sometimes-confrontational graphics that are featured in the exhibition.

The most familiar design is likely the work The Haçienda. The Manchester club, set up in 1982, with interiors designed by Ben Kelly gets its due at the exhibition, with a note on the industrial interior design cues as well as the name’s idiosyncratic typography. The ç has a cedilla even though the Spanish wording does not, so that the çi resembles 51 (the club’s Factory Records catalogue number).

Posters are displayed, with designs from Peter Saville, such as the Haçienda Hallucienda picture from 1989 which features a magnified pollen grain floating through space. The exhibition notes how unusual Saville’s work is: while lower-cost DIY club flyers were being distributed, Peter Saville Associates used high quality production to explore experimental images. There is also material from design studio The Designers Republic and its work on Birmingham nightclub Gatecrasher. 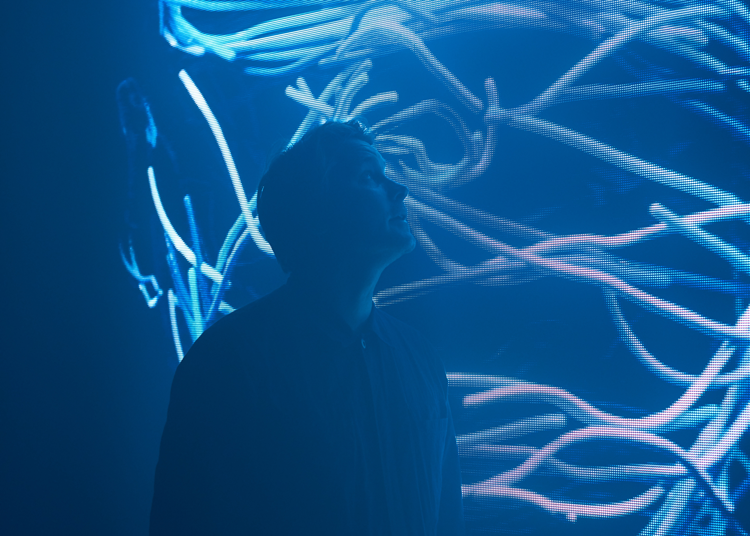 Club culture has played an important role in many a designer’s career. The Social, which was based in London’s Little Portland Street, commissioned Anthony Burrill on a series of Balearica nights at the club. Burrill created a “set of twelve designs that shared a simple graphic language, using geometric shapes, pop-inspired abstractions and a simple colour palette”. Elsewhere, the famous branding of electronic music as pacifist in the 1990s – with the use of the iconic yellow smiley face – is showcased. Another highlight is a range of album covers, which centre around the idea of the record as a collector item. There is work here from Non-Format, which has created sleeves for east London record label Lo Recordings. Custom fonts have been produced for each sleeve which means the covers are all unique. Threaded through the exhibition is the social history of electronic music: highlighting the way that clubbing communities have bypassed youth laws intended to stop rave culture, and how “expressions of resistance” have “empowered” minority groups such as the LGBT community. This is charted across social musical movements such as No Shade, Discwomen and female:pressure, and on a wider scale, how a city like Berlin became a “haven” for club culture in part because of its notorious club, Berghain.

“The transformative power of music, art and design”

At a time when nightclubs are either closed or have strict social-distancing methods, the exhibition is the closest many will come to clubbing. Throughout, there is a soundtrack mixed by French DJ Laurent Garnier, who began DJing in 1980s Manchester. There are also contributions from headliners from the British electronic scene: The Chemical Brothers, Kraftwerk and Aphex Twin.

Three installations are key in evoking a club-like atmosphere. The first is a 3D experience from Kraftwerk. The Catalogue 12345678 is a “synthesis” of the music pioneers’ work – which take the form of eight concept albums – from the 1970s onwards. It is a Gesamtkunstwerk (which translates to a total work of art) and is described as a “long musical adventure”. Visitors are given disposable glasses for the experience, which is like a high-concept music video which combines music, images and film.

The second is a moving light display, designed by 1024 architecture especially for the exhibition. To Garnier’s soundtrack, bright lights move in a “dynamic spatial form”. It’s designed to mimic the “digital and visual creations that accompany most electronic musicians in concert”.

The final room belongs to Got to Keep On, a 2019 piece from The Chemical Brothers and show designers Smith & Lyall. The design duo has worked with the British duo since 2009 to curate live experiences which “transcend” audio-visual experiences. The installation features the track Got To Keep On from the 2020 Grammy Award-winning album No Geography and is a memorable way to end the exhibition. The room features strobe lighting and smoke effects, an attempt to create a club-like setting.

Design fits naturally into this scene. As The Chemical Brothers say of the new exhibition, “Design is an essential element enhancing the experience of our live show.” Smith & Lyall note how the “the transformative power of music, art and design” is especially important during lockdowned times.

Exhibition design for the London show has been carried out by All Things Studio. The studio’s founder Matt Schwab tells Design Week that one issue for the exhibition was to be sustainable, which means that material from the previous exhibition Moving to Mars has been reused. It’s also been “opened up” in its transfer from Paris, where the design was more “labyrinthine”. The studio had clarity in mind when designing the exhibition – making sure that the scaffolding did not dominate and that the displays were open. It was about making it more “legible”, Schwab says.

Schwab calls the exhibition a “strange hybrid”. The central tension of the exhibition was balancing the information and displays with the club-adjacent settings. As Schwab says, it was working out how to make people “read captions in a club”. By keeping the displays relatively simple, it is hoped that the visitors will be able to appreciate the more sensory aspects of the exhibition.

Pace was also key. Schwab highlights the “quieter moments” of the show such as the exploration of graphic design where visual elements are more important than the sound and lighting. This was another change in focus from the Paris exhibition, Schwab says. The designers considered the major installations – the light room, Kraftwerk’s catalogue – as “anchors” and were keen to “spread them out”. It means that when the climax arrives – the immersive Chemical Brothers installation – it is a fitting final experience before the lights come on.