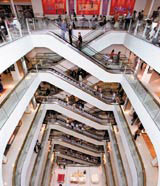 A dramatic five-year renovation at the Peter Jones department store in London’s Sloane Square reached completion this week, with an extensive signage programme by Pentagram.

At a cost of almost £110m, the interiors of the iconic Grade II-listed building have been reworked in a Modernist style by architect John McAslan.

Pentagram partner John McConnell developed conceptual work for the store’s signage, in consultation with an in-house team at John Lewis Partnership, owner of Peter Jones. McConnell designed signs for the whole of the John Lewis estate, though he set a particular tone for Peter Jones to set it apart from the other outlets.

‘We chose a considerably softer style for Peter Jones. The font is Modern 20, which is a book-face classic rather than a sign font. It gives a softer, more feminine feel than the Gill font used in the other John Lewis stores,’ says McConnell. A simple, black and white scheme contrasts with the dark green and yellow palette of the John Lewis signage.

Pentagram also created obelisks on each floor to generate a strong vertical line when looking into the central atrium and to indicate the floor number on each level.

‘It’s a quiet design,’ McConnell says. ‘People over-sign in my view; they think that bigger signs equate to bigger takings at the cash till. We kept it to a minimum.’

The project has been hailed as the most complex retail refurbishment in Europe this decade. The exterior of the 1930s-built store is preserved by McAslan, while its interiors have been rationalised from the original warren of 70 different levels, to eight distinct floors.