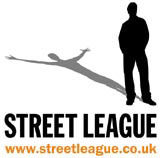 The move comes as the three-year-old organisation, which uses football to engage society’s hardest-to-reach groups, looks to branch out into other sports and to embrace the female market.

‘Our original logo was quite limiting, as it just depicted football,’ explains Street League promotional unit manager Jennie Harland-Khan, who is overseeing the design work.

‘The challenge was to come up with a more generic theme that communicated across different audiences, from the players – who might be homeless, in rehabilitation or asylum speakers – to our funders in the corporate world and the Government,’ she says.

It rolls out across stationery, literature, an awareness campaign featuring photography by Tom Miles, and a website, www.street league.co.uk, from this week.