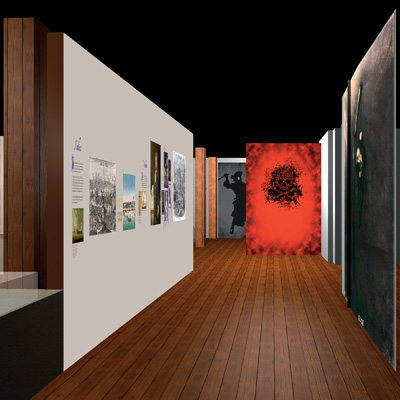 The Museum of London Docklands is to host the Pirates: The Captain Kidd Story exhibition from next month, with exhibition design and graphics produced in-house and marketing material by Cog Design.

The exhibition, which will be held from 20 May to 30 October, focuses on the career of privateer-turned-pirate William Kidd, who was executed in Wapping in 1701.

All exhibition design, interactives and graphics have been created in-house by the Museum of London design team, while Cog created the skull and crossbones image that has been used on marketing material including posters and postcards (DW 6 January).

Leigh Cain, head of design at the Museum of London, says the team has been working on the designs for about eight months.

She says, ’The exhibition takes a series of stories, looking at how Kidd came down from Dundee, became a sailor and was eventually executed. At the end of the exhibition visitors will be able to vote on whether or not they think he was a pirate as there is some debate over this.’

The exhibition will feature objects including Kidd’s last letter, which mentions a promise of hidden treasure, a real pirate flag and an early-18th-century cannon.

Tom Wareham, curator of maritime history at the Museum of London Docklands, says, ’Captain Kidd was enmeshed in intrigue that involved corrupt MPs and the mighty East India Company. This exhibition will not only tell Kidd’s story but use some of his actual letters and documents to help bring him back to life.’

Cain says the exhibition will feature a selection of treasure ’because that’s what people want to play with’ opportunities to dress up as a pirate and a recreation of a gun-deck, created by scenic artist Anna Stamper. The museum’s lead exhibition designer is Eleonora Rosatone.

There will also be a series of interactives, including a 4m-long table topped with a 3D ship that users can navigate through a series of hazards. Illustrator Martin Hargreaves has created a desert-island backdrop for this installation.

Cain says the exhibition is bookended by two ’swashbuckling’ films an opening one looking at Kidd’s life and a closing one comprising a selection of scenes from pirate movies.

Graphics for the exhibition have been created by the museum’s lead graphic designer Debbie Armstrong.

Cain says, ’The graphics are inspired by tattoos and graffiti, and as they were worked up we also developed wave forms.’

She adds, ’Textures used are based on hand-written documents and canvas parchments. These have been developed into a series of banners used throughout the exhibition. There will also be a lot of audio used such as creaking ropes and the sound of ships.’

The life and times of Captain Kidd