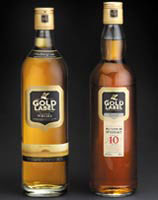 The consultancy took its inspiration for the packaging from Scotland. Diwisa, which sells the brand in Switzerland, buys the whisky from a Scottish distillery.

The distillery has views of a volcanic rock emerging from the sea, which is home to a colony of puffins, and the group has used the puffin and the rock as key elements in the redesign.

The use of a predominantly black label with a white, contemporary logotype gives strong quality cues and a good shelf standout, says Design Bridge account manager Carsten Heldmann, who led the project.

‘The whisky was so mass market that there was no distinctive brand equities. We have come up with a very radical change of packaging. We had to see what sort of Scottish image would work in the Swiss market. We wanted something more memorable than the obvious things like tartan,’ says Heldmann.

Diwisa marketing director Christoph Heeb believes the work will make a real difference to the brand’s market performance. ‘This will be the first time Gold Label will assert itself as a strong brand in its own right. We believe it will have a significant impact on our business, both commercially and in other ways,’ he says.

The consultancy won the work via a non-competitive credentials presentation.