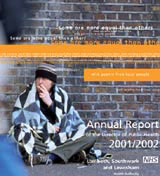 Hunter Lodge Design has designed the Lambeth, Southwark and Lewisham Annual Public Health Report 2001, which is published on 2 April.

Part of the brief was to show the contrasts of the area, particularly in lifestyle health issues, such as smoking, Aids, unemployment and homelessness.

The consultancy was also briefed to reflect the ethnic diversity of the area, which is home to communities of African, Afro-Caribbean, Portuguese, Vietnamese, Somalian and Irish people.

Its solution was to get local people to write poems on specific themes and to combine them with photography by Brett Williams.

Hunter Lodge Design has been one of Lambeth, Southwark and Lewisham’s ‘preferred suppliers’ for about a year, according to McLellan.

Group with no future goes on to celebrate 25 years