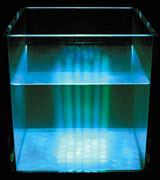 At the judging of the Design Week Awards, the interactive media categories team ran through a swathe of digital media entries. Noticeably, many projects were defined, more for their similarities than their differences. Equally defining was the dominance of projects designed to be seen from the screen on your desk. It is such a successful format it has become ingrained into our computer-using consciousness. Yet there is evidence that the pioneering digital interactive work is now being done elsewhere. Ground-breaking projects for permanent and temporary exhibitions have allowed creatives to leverage work with alternative methods of interaction.

A milestone in interactive exhibition work came with the Science Museum’s Wellcome Wing in London, completed two years ago. Although over 60 interactive exhibits were commissioned, the two that stood out were particular in the way they employed tailor-made and unusual input and display devices. The projects, Comment and In Future, were both designed by digital group Itch. One of those projects, the British Design & Art Direction Gold-winning Comment, is ground-breaking in its pure scale, a formidable track network of 27 000 LED units allowing messages to be sent through a maze suspended over all four floors of the gallery space. Many design groups today are – consciously or not – reaping the benefit from such projects, proving that innovative methods of interaction can be the best way to engage and stimulate an audience.

US group Small Design works with what it terms ‘sophisticated, out of the ordinary applications visualising many types of information’. To do this, Small Design often uses purpose-made electronic devices to replace inputs like the mouse. The consultancy has recently finished designing the centrepiece of the new Genetics exhibit at the Museum of Science and Industry in Chicago, due to open this autumn.

The project, called Human Genome Interactive, will introduce the visitor to the concept of genetics by a series of visual explanations. Founder David Small says, ‘We wanted to let people “see” the genome – an artefact that is as much an information abstraction as a physical reality. We made the interactive controls like an aircraft. Users can fly into the genome, seeing more detail as they get deeper into it.’

Other work includes three permanent exhibits for the Asia Society in Park Avenue, New York, revamped at the end of last year. One of the exhibits is based on an interactive handrail linked to a large high-resolution display. Visitors can move their hands along the rail setting off a timeline on the screen. Small says of the rail, ‘This was an idea that came from my collaborator on the Asia Society, Andrew Davies. As an idea, it worked on various levels – it allowed people to use their hands and bodies in the ways that they would expect from a railing. Also, the linear aspect of the rail was a perfect match for a one-dimensional timeline.’

Small is used to being at the forefront of technological developments. Originally a member of the Visible Language Workshop at Massachusetts Institute of Technology’s MIT Media Laboratory, he then worked with the Aesthetics and Computation group run by digital designer John Maeda. Small’s Media Lab work, focused on the complexity of textural information, is finally bearing fruit in the public domain.

The reason why little of this type of work has previously been aired publicly or even developed is twofold. First, it is difficult to do. Second, it is expensive to develop. Tomato Interactive creative director Tom Roope confirms that ‘Internet is relatively cheap so you can be casual in approaching its design. With this stuff, you have to commission electronics, so you really have to think beforehand to get it right. It is also a huge increase in risk because of the demands of taking on bespoke devices’. Why bother then? ‘It is so unexploited,’ says Roope. ‘It is an area where you can surprise and intrigue people.’ In exhibition and public interaction work, ‘I find the seedlings of something a lot more meaningful than what’s been going on with the Internet, a cheap international publishing tool applied in a very banal way,’ he says.

Tomato has been specialising in one-off temporary exhibit interactives that allow it to be experimental. Roope is collaborating with ex-Royal College of Art designer Graham Plumb to work on the latest exhibit in a series he calls Reactive Spaces. The installation is for this year’s IdN Conference in Singapore starting on the 26 April. A camera looking up through a glass cube filled with water detects movement. ‘As you lean over the water, a three-dimensional image starts to form in the water,’ says Roope.

Itch co-founder Durrell Bishop is also continuing to push the boundaries of computer interaction even though he has been at the forefront of this kind of innovation for nearly a decade. Since the Wellcome Wing projects, Bishop and fellow Itch founder Andrew Hirniak, have joined with interdisciplinary design group Ideo at its London headquarters. Bishop’s ideas have always been informed by a willingness to break down the components of computers and redefine each element. Even trying to define where interaction design sits within computing causes Bishop to speculate. ‘Where do you draw the line? What I try to do is find the boundaries. For instance, where the screen is placed can be what matters in a communication rather than what is on it,’ says Bishop. The In Future exhibit has the display projected on to a huge table and visitors have to come to the table in order to interact with the image.

Bishop is currently working on the Alternative Displays exhibit for the British Council’s gallery in Prague. It’s set as a window display and will run from July to August. One of the windows will display a huge bowl of what could be called marbles. ‘It is like a bunch of grapes,’ says Bishop. Each marble will act like a single light in an LED text display, except it will have a three-dimensional element. Text messages can be displayed along the marbles themselves. The project continues Itch’s interest in the concept of text that flows over surfaces.

Last year Bishop and Hirniak created a series of woolly hat-based text displays, used in a performance on the opening of the Interaction Design Institute in Ivrea, Italy, run by former head of the RCA computer-related design course Gillian Crampton Smith. Text messages are sent and also worn. ‘Words are more interesting than the shape of words,’ muses Bishop. His work, however, challenges people to see the beauty of display as well as the message itself.

Overall, these designers feel it is worth the hard work. ‘This has never been lucrative,’ says Roope. ‘It is more a labour of love. It is about playing, and finding the possibilities of the medium.’ Small adds that building handmade, dedicated devices and systems ‘allows me to work to the highest denominator rather than the lowest common denominator. It’s not something I’m interested in. I have a lot of respect for those who can do it.’ Bishop sees the task is vital as it may challenge other creatives to be more adventurous. ‘Designers only see a portion of what interface design is and don’t break it down to its real components. They become the exponents of guidelines that don’t necessarily need to be adhered to. Sometimes what you are looking at does not necessarily define what it is.’

The hard work is a benefit to us all if it allows the computer-using public to enjoy new creative life from a medium that was in danger of tiring out. Such work also has the potential to redefine how we use computers in order to network and communicate. And in the future? The possibilities of such computer interaction will hopefully extend into even more accessible domains, like the high street retail area, or even something new on your desk for a change. m

David Bernstein: But does it scare crows?