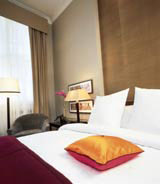 This fourth addition to the small, but fast expanding Eton Town House group is billed as ‘the first contemporary boutique hotel in the City’. Although Threadneedle Street marks a shift up in scale from the more traditional refurbishments the group is best know for, director Peter Tyrie is keen to emphasise that individuality is still the name of the game.

Occupying a Grade II listed building (once the Midland Bank headquarters), the Corporation of London insisted that many of the original features were retained, which the design group GA Design agrees ‘adds instant weightiness’ to the scheme, giving it a well-established feel. The piÃ¨ce de rÃ©sistance is the huge glass dome that dominates the lobby. Modern pieces sit comfortably alongside the traditional elements: a 4m-high laminated burgundy glass screen has been mounted behind the reception desk and a huge hand-tufted rug depicting Japanese carp was commissioned from Couristan Carpets for the entrance. ‘It’s the same idea as wearing red socks with a sober business suit – it’s a serious space with humorous, quirky touches,’ explains GA project manager Joanna Biggs. Elsewhere, the original panelling has been polished and restored, and the old timber bank counters have been inset with coloured laminated glass and used for the bar.

The internal partition walls that don’t touch the building’s shell are treated in a totally contemporary way, helping to lift the interior while keeping in harmony with the more traditional elements. The result is a comfortable, ‘clubby’ atmosphere: lighting levels are kept low and furniture is generously proportioned. A subdued, neutral palette of colours is given depth with the use of rich leathers and walnut veneer. Of the 69 rooms, there are 12 suites and a penthouse occupies the top floor with, appropriately, views of old and new architecture: St Paul’s cathedral and Lloyds Bank. The suites are all named after a modern explorer: The Shackleton and The Amelia Ehrhardt are two examples, each of which comes equipped with glossy coffee table books on their namesake.

Targeting the 30to 50-year-old business traveller, every bedroom comes equipped with multiple data lines and there are three state-of-the-art meeting rooms. The basement will be sublet for a health club, which together with the bar and restaurant, Bonds, will operate independently in a bid to attract non-residents.

As proof of confidence in its brand, Eton Town House is opening another contemporary hotel later this year in Edinburgh. e