Airbnb has opened a new international headquarters in Dublin, which it has designed in collaboration with local architect Heneghan Peng.

It is the first time that Airbnb has designed the architectural layout of an interior space, as the building, now known as The Warehouse, was just a shell before the company moved in.

Covering 4000m2 The Warehouse is a large building, as many of Airbnb’s offices are. When designing the new space the company has taken learnings from its Portland, US office, where employee visibility was an issue as there were so many flexible spaces people couldn’t be easily found.

Speaking to Design Week, lead interior designer of Airbnb Rebecca Ruggles says that when it comes to its own offices, Airbnb has looked to balance its “belong anywhere” philosophy – which is found across the whole brand – with the idea of “neighbourhoods”.

Ruggles says that the neighbourhood areas are contained and designated working spaces that provide up to 14 people with all of the facilities they need. 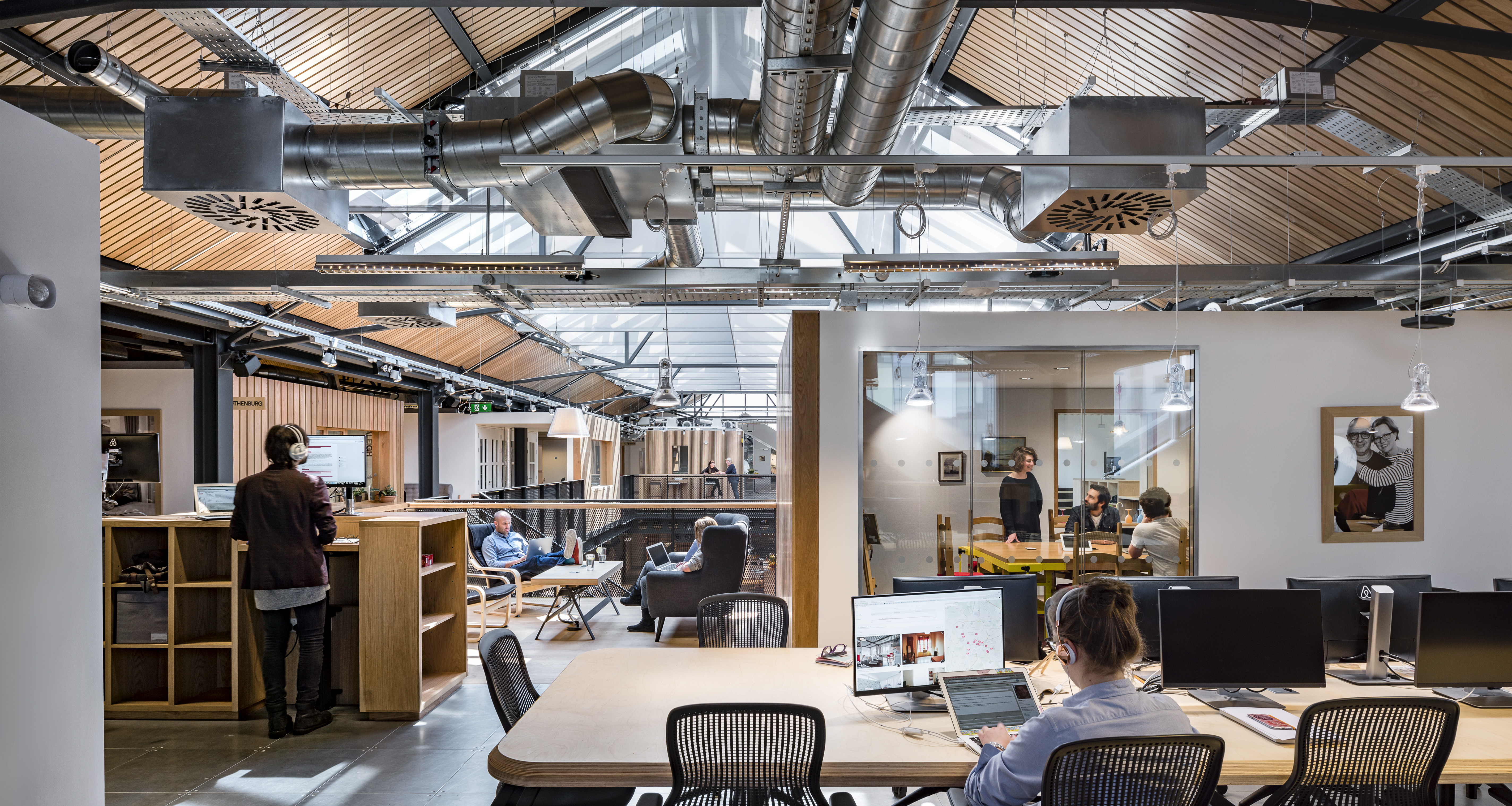 There are primary and secondary work spaces across the building. Secondary workspaces include kitchen areas and meeting rooms. The primary workspaces consist of 29 neighbourhoods with identical components – one large table, personal storage, one-two sit stands and one lounge spot.

Making sure workers don’t get lost

“Visual connections can be made throughout the space”, so that teams can work in a flexible space but still stick together, says Ruggles.

As a result of the new Dublin office, the Portland office has been rethought along the lines of the neighbourhood concept.

In the Dublin office individual desks have been replaced by one large communal table which encourages sharing and there is custom built furniture by local fabricators including tables by Burke Joinery.

Central staircase is a flexible space

The entire office has been built around the central “Agora” staircase, which connects the first floor to the basement and helps to create “the right balance of privacy and socialisation,” according to Ruggles. 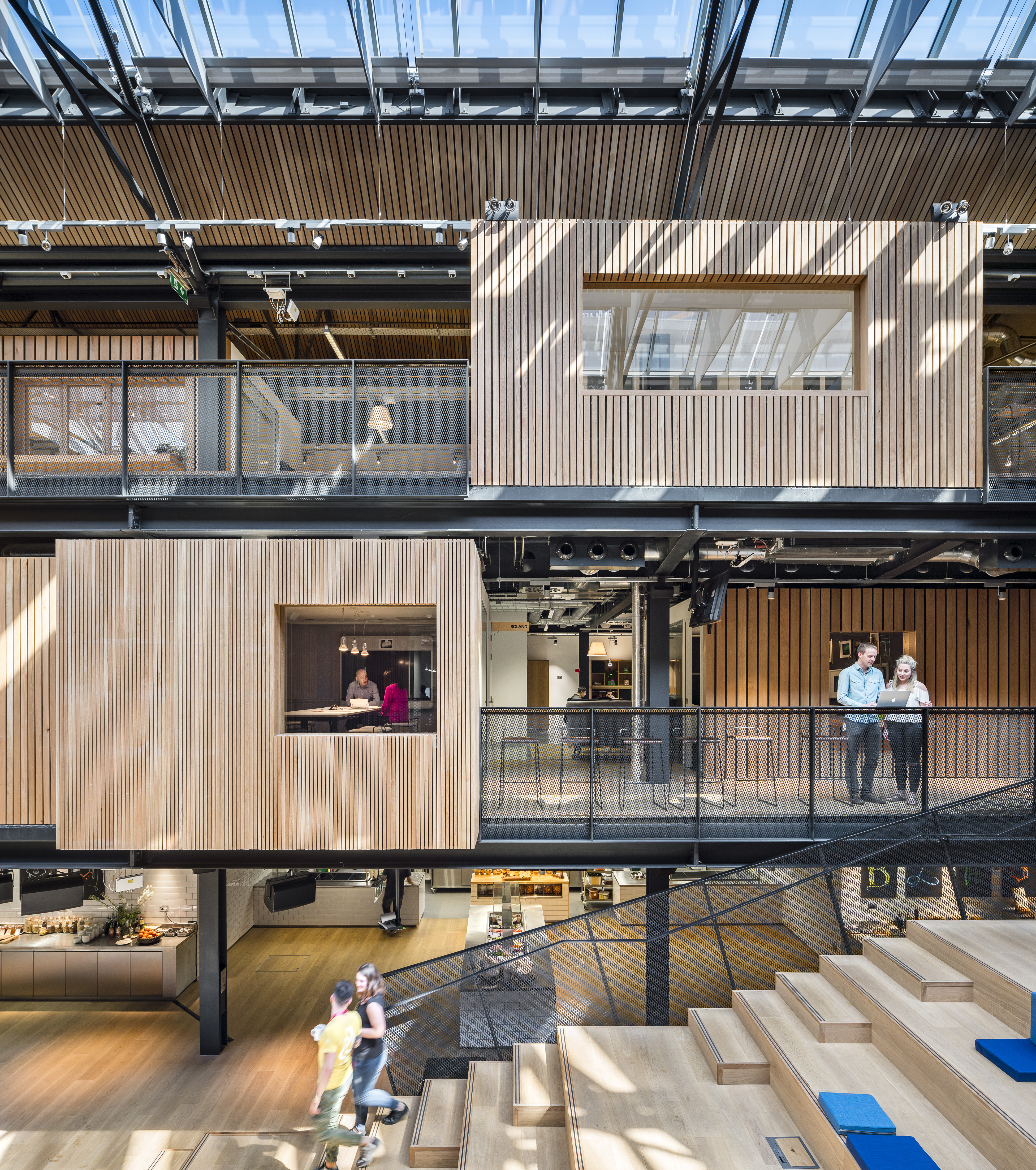 It can also act as a conference and community event space for up to 400 people or become a lounge-style working environment.

Each meeting room has been inspired by listings form around the world and the likes of Portugal, Greece, Romania, Japan, Sweden, Morocco and France have been referenced in the design.

Ruggles works alongside an Environments Team of eight interior designers led by Aaron Taylor Harvey and Rachael Yu, which has consulted the employees in the Dublin office to add finishing touches, while Heneghan Peng has honed and implemented the designs.

These include a copy of a dining table from a Romanian listing and a copy of interior décor from a listing in Montpellier, France as well as local Dublin inspiration. 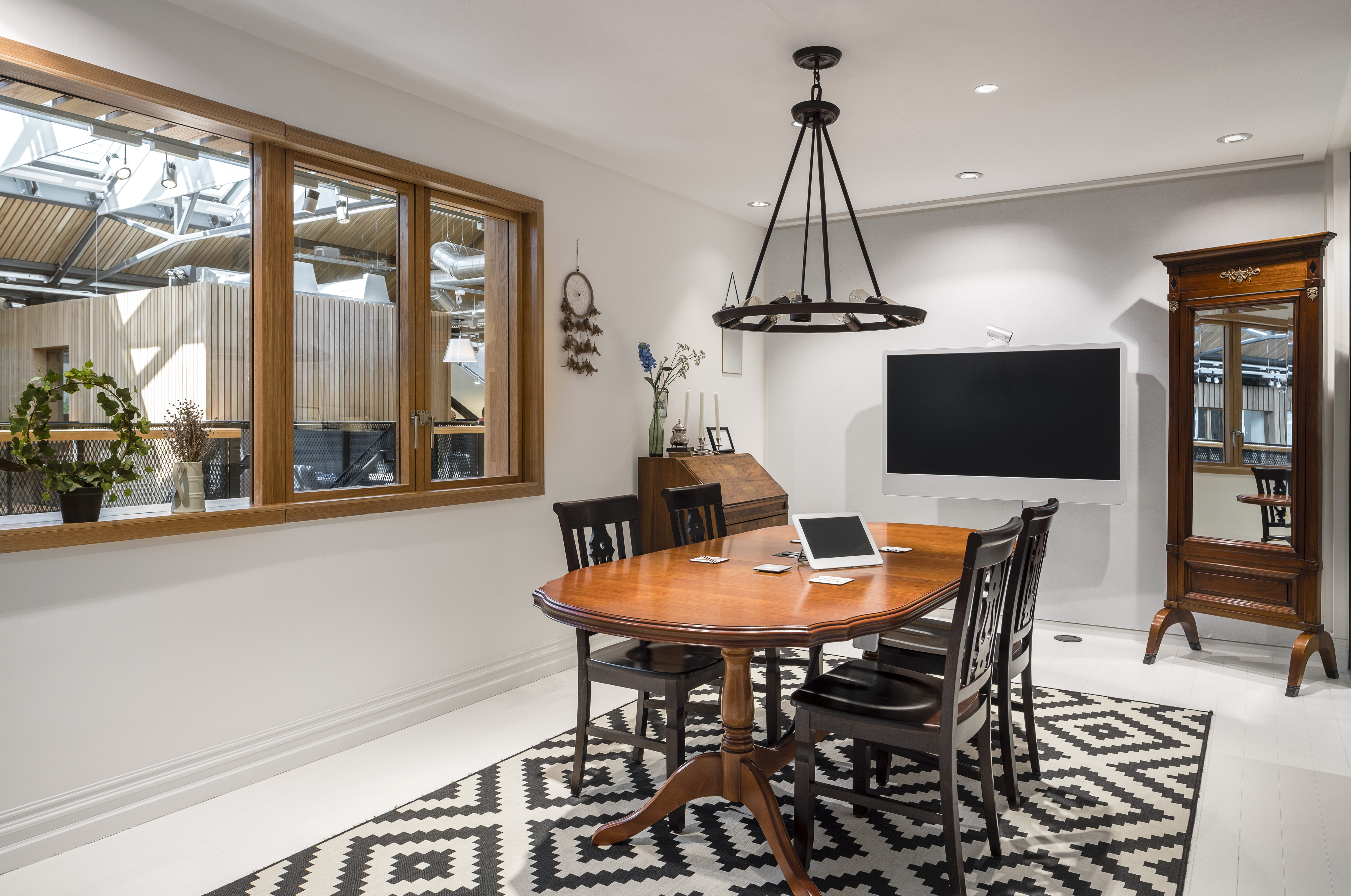 “The local Airbnb employees took great pride in adding the final touches to the design of the meeting rooms. Together, we brainstormed ways to truly transport people as they walk through the door.

“If you’re having a stressful day, walking into the Mykonos zone and sitting under the Pergola with bougainvillea plants hanging around you, can really help feel like a trip to the island and settle your mind.”

It is the second time that Airbnb has worked with Dublin-based architects Heneghan Peng, which also worked with Airbnb in 2014 to design the first Dublin office at the Watermarque building. 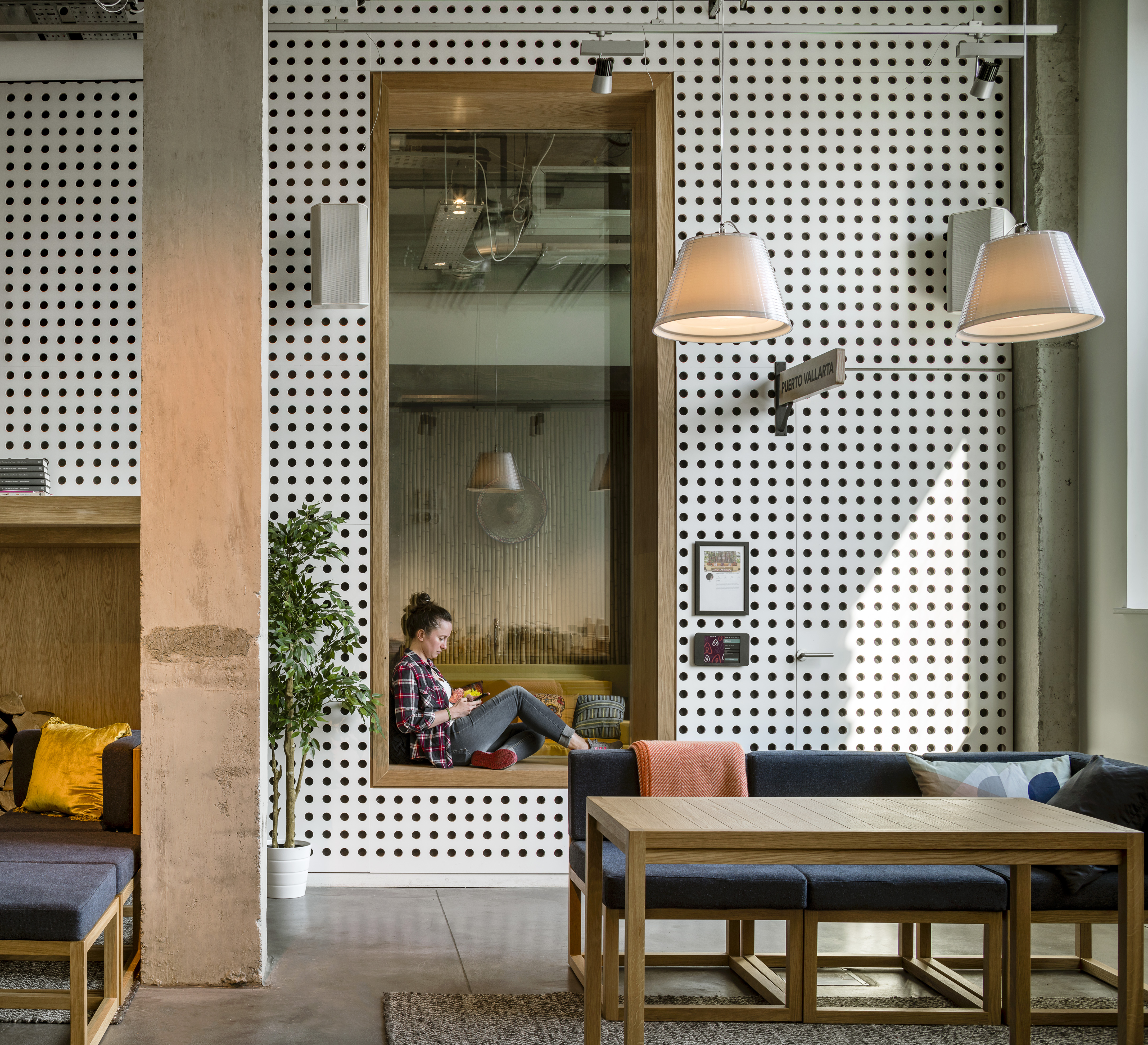 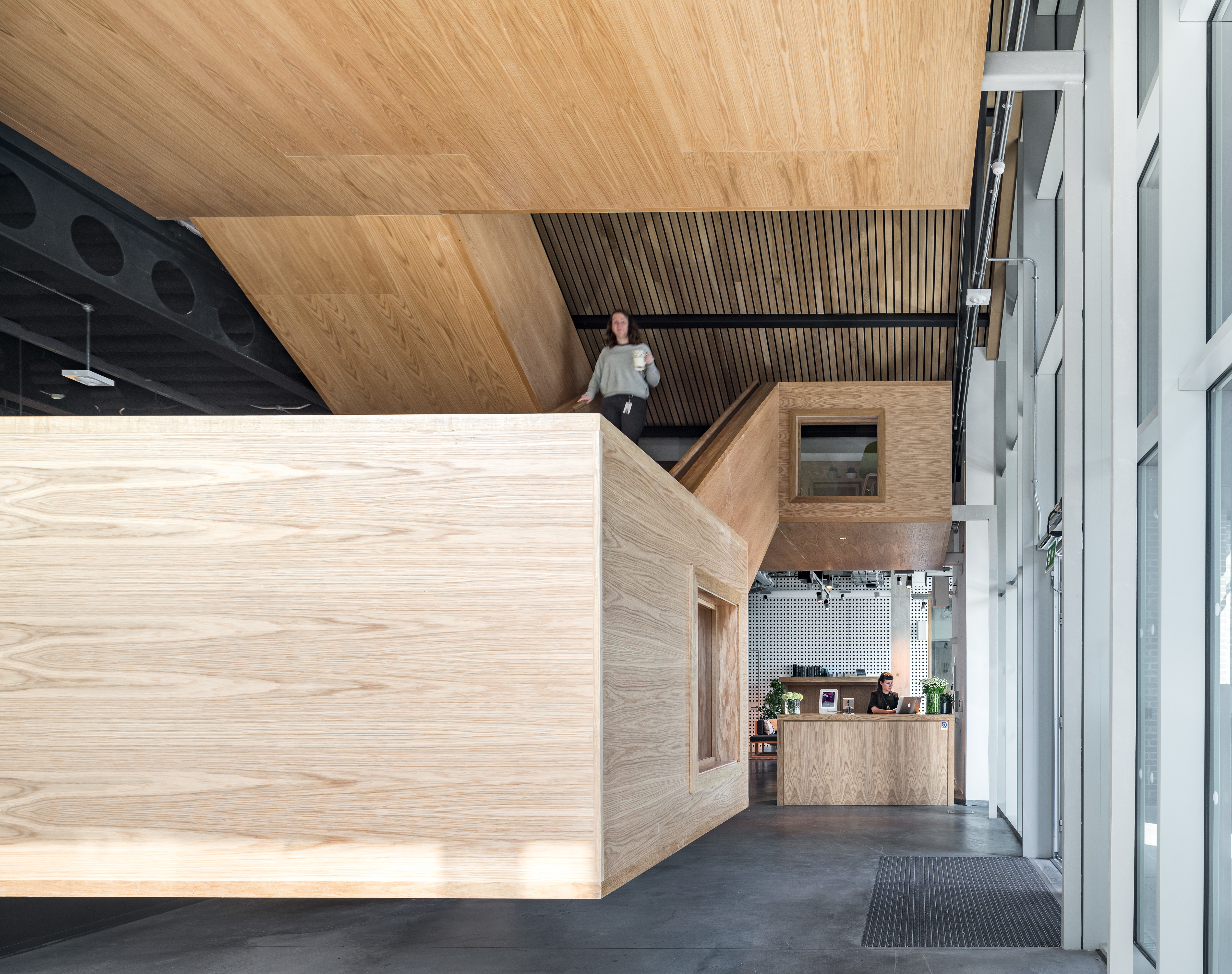 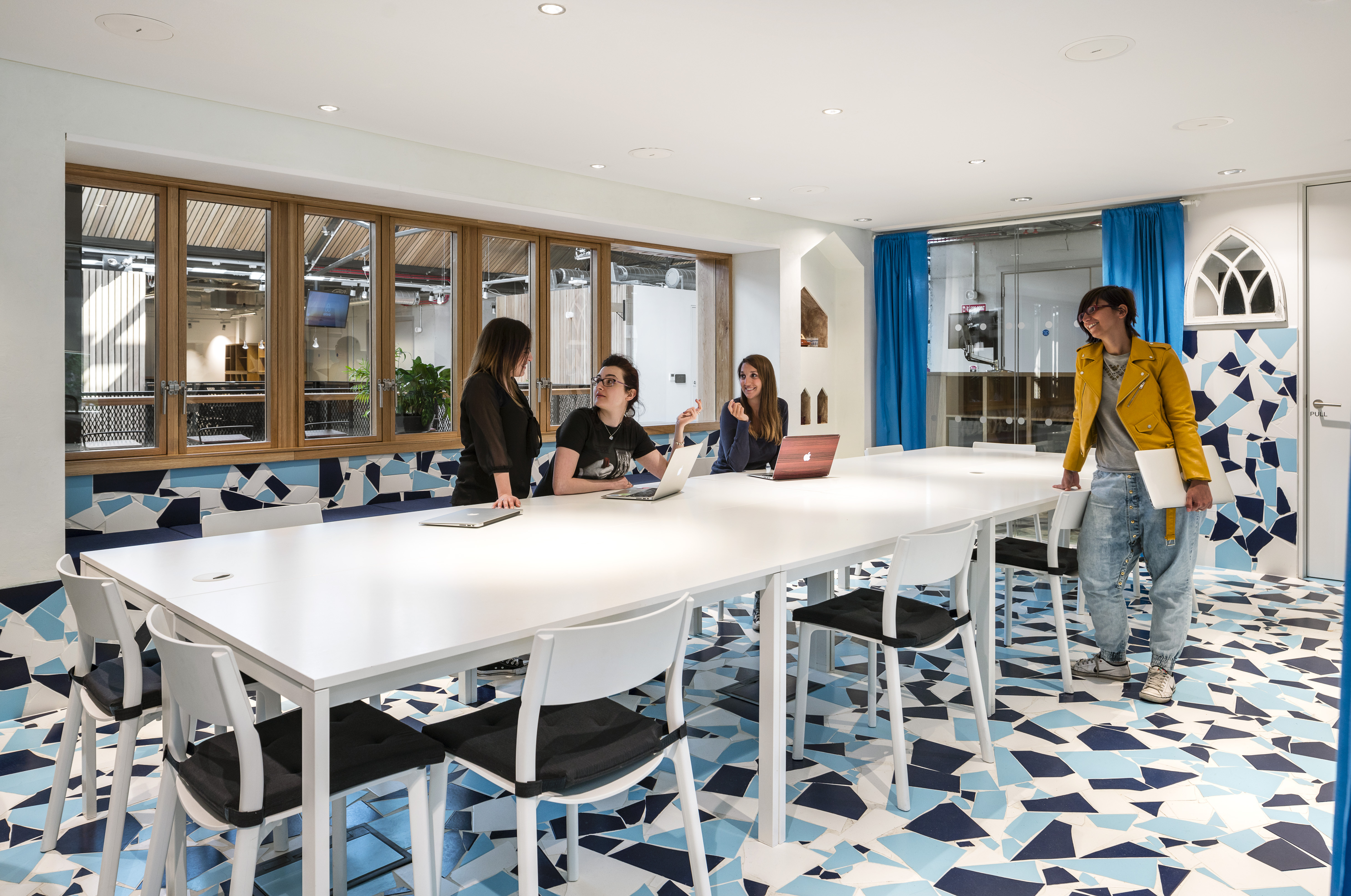 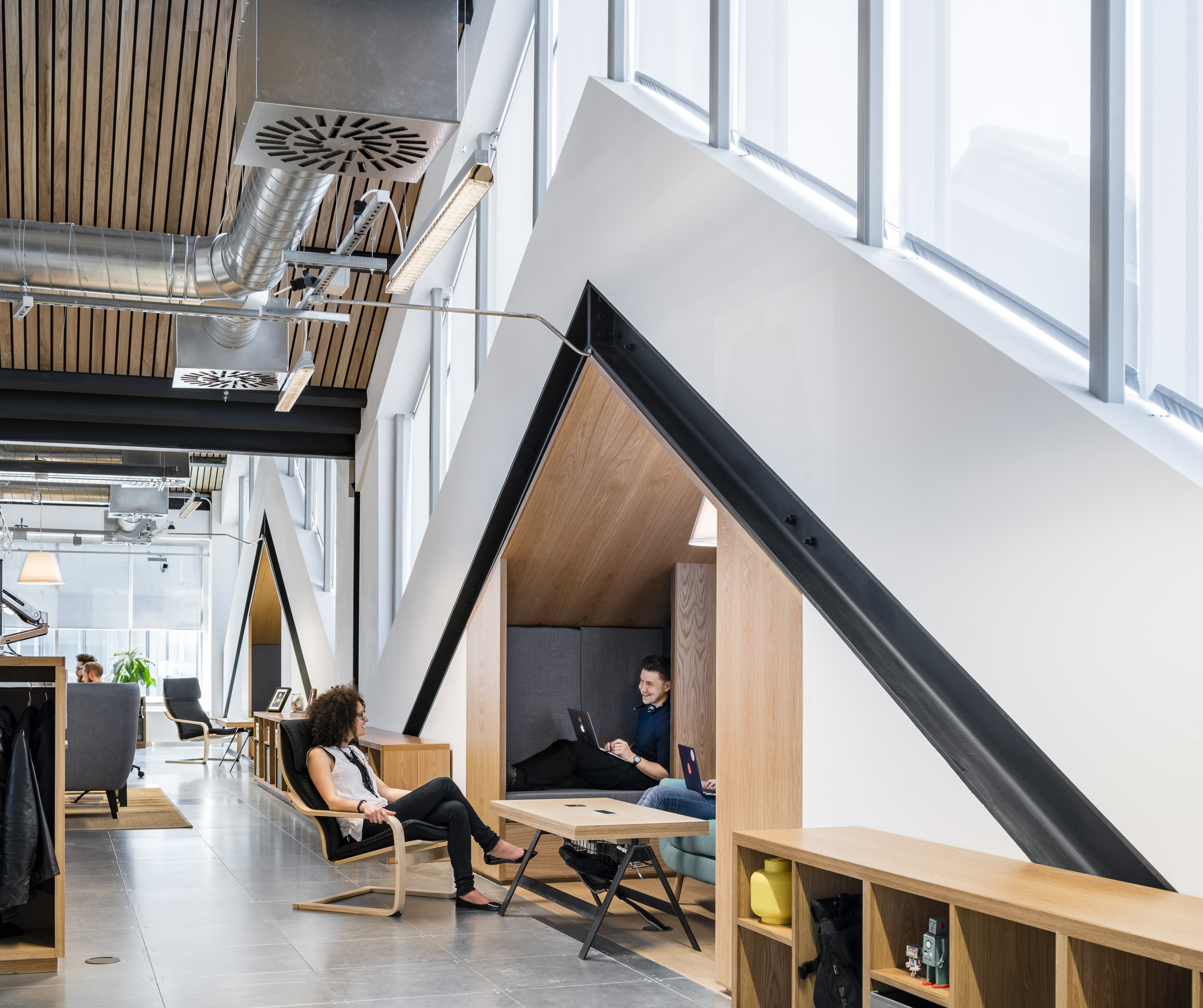 All images by Donal Murphy