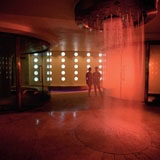 Pampering is in – for both men and women – and the spa sector is booming as never before. Hannah Booth bathes in the experiences on offer at some of the latest spa and well-being developments in the UK

There are few places better for the soul on a Friday afternoon than the rooftop pool at the new Thermae Bath Spa, in Bath. The outside air buffets your face to a glow and the naturally hot spring water soothes your tired limbs. Downstairs, four steam rooms are set to different temperatures and infused with essential oils such as eucalyptus and lavender.

Architect Nicholas Grimshaw’s elegant glass and stone construction – not without its well-charted problems – joins that exclusive group: spas that make an architectural statement. Barcelona’s O2 spa, a shiny cube of steel and glass, got there first and will soon be joined by the Caudalie spa near Bilbao, designed by Frank Gehry. 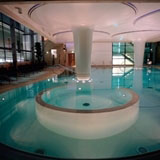 Spas are booming. The sector in the UK alone is worth an estimated £1.5bn, the growth down to demand for ‘more pampering-oriented’ well-being experiences, according to the Spa Business Association. And they’re not just for women – men are apparently no longer embarrassed about visiting spas and booking treatments. Thermae Bath Spa proves this point: up on the rooftop, groups of young men look very comfortable. They should: it’s a democratic, unfussy spa that is almost Germanic in its spareness, with unisex changing rooms and pared-down interiors – like very upmarket municipal swimming baths – designed to appeal to both sexes.

The palette consists of white and grey granite, neutral Bath stone, timber and extensive use of light, both natural and accented. At night, the spa comes into its own. ‘We chose a limited range of simple geometric forms – as the real drama comes from the play of light and reflection,’ says a spokeswoman at Nicholas Grimshaw. The functional granite spiral staircase that links the different pools and rooms – pleasantly rough on bare feet – is studded with circular glass portholes.

London’s latest spa offering, Simple Spa from health and beauty brand Simple, offers something a bit different. It is aimed squarely at women aged 28 and above, and is not strictly a spa, which by definition uses water and heat for well-being, but rather an urban salon offering treatments such as facials and massage. Interiors were created in-house, based on original concepts by Redjacket, and branding and packaging of the exclusive range of new products was by BR&Me. Simple Spa opened last month in Covent Garden and is the first of about 30 planned nationwide. 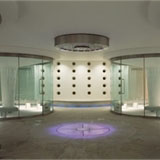 ‘The interior had to be fresh and open, but not sterile or pharmaceutical looking. We used white, silver and shades of purple that are also reflected in the packaging.’ ‹ Simple Spa is also a clever way to shift products. The new range, Simple Therapy, won’t be sold in shops. Round the corner in Covent Garden, established day spa Sanctuary has done the opposite: created a spa and then a high-street retail presence for its products, including body scrubs, bath products and moisturisers. The danger here is that the original brand appears less exclusive because anyone can buy its products relatively cheaply in Boots.

Design – branding and interiors – is vital to well-being as the look and feel of a spa, and its products, are central to the experience. ‘Spas are all about the customer experience, that’s the whole point,’ says Ian Sherman, chairman of interiors and architecture at Corporate Edge, which has been working in the spa industry for almost 20 years. ‘It’s the most intimate experience outside home so it has to be warming and inviting,’ he says. The most important design elements, according to Sherman, are the sequence of spaces, lighting and materials. ‘Large, cold, untactile rooms that are poorly lit should be avoided. And there’s a move towards natural stone and sustainable materials such as timber. Spas used to be rather anaemic, but designers are becoming more adventurous. And it’s very important to make use of as much natural light as possible,’ he says. 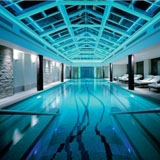 Corporate Edge’s latest spa project, the Kohler Waters Spa at the Old Course Hotel in St Andrews, Scotland, was completed in March. Spas in hotels, says Sherman, is a growth area as hotels love to add other elements to their businesses. But the biggest growth area, he believes, is the development of ‘medi-spas’. The concept comes from the US: traditional spas in look, feel and philosophy, but offering medically prescribed treatments from qualified staff. Corporate Edge is working on four medi-spa concepts in the UK, all currently under wraps.

With a growing number of salons, day spas and medi-spas, Britain’s burgeoning number of spa junkies can take heart. The rest can buy their products and recreate the sensation at home. But relaxation and pampering are here to stay. l