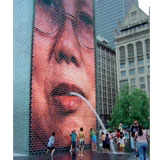 This year’s £20 000 Bombay Sapphire prize has been won by Spanish designer Jaume Plensa for his public art piece the Crown Fountain in Chicago.

The piece consists of two 15m illuminated glass towers facing each other, separated by a shallow, reflective pool. Faces of 1000 Chicago residents appear intermittently, spouting water gargoyle-like from the towers.

According to Ron Arad, who was one of the judges, the piece is ‘the best use of glass in a public space I have ever seen’. Nadia Swarovski, another judge, called it ‘thought-provoking’ and says it transmits ‘a feeling of Zen in the city’. 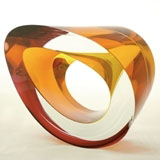 Created to highlight the work of emerging new talent, the Best Newcomer prize is awarded to a designer with no more than three years postgraduate experience. This year’s shortlist included young British designers Joseph Harrington, Nick Turvey and Gaea Todd, along with Swedish designer Asa Jungnelius and American Marya Kazoun.

The winners were chosen from a shortlist of 20 entries, which included five British designers, four from the US, two Swedes and others from Estonia, Spain, the Netherlands, Taiwan, Japan, Germany and Canada. Across both prizes, pieces varied from art and installation works to product- and architectural-led designs, though the latter were in a minority this year. ‘We noticed that the shortlist was particularly strong on art and installation pieces this year,’ says a spokeswoman. 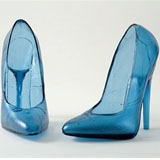 Among the architectural pieces was Taiwanese designer Loretta Yang’s work at the Liuligongfang Museum in Shanghai, where the 1000m2 museum’s exterior wall is made from 12 000 individually made glass bricks.

The art-led entries included Asa Jungnelius’s I Like Your Hairstyle!, an installation comprising handmade glass objects displayed in front of a mirror and behind a reflective glass shop window.

Along with Arad and Swarovski, judges for the 2006 prize included Tom Dixon, Nicole Farhi and glass experts Lesley Jackson and Dan Klein.

Now in its fifth year, the annual prize was launched in 2001 to promote the achievements of international artists, designers and architects working with glass.