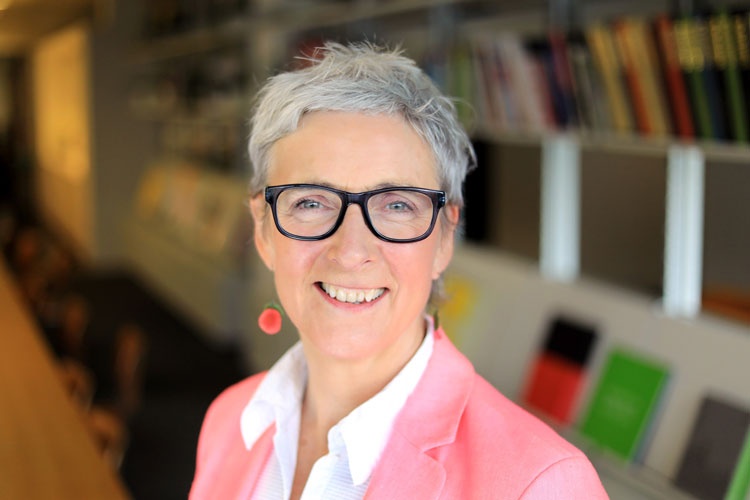 Sarah Weir has announced that she is stepping down as Design Council CEO after three and a half years in the position, following a diagnosis of a rare lung disease.

She formally steps aside on 29 October 2020 when executive director Sue Morgan and chief design officer Cat Drew will share the CEO role until a new appointment is made.

Speaking to Design Week, Weir says that she is proudest of how the council “looks and feels different” after her tenure. Weir was the first women appointed as chief executive and says that the organisation was 90% white when she joined — a lack of diversity that “surprised” her.

“When you have somebody different in a senior post, it shifts everything,” she says. She says diversity should cross all touchpoints; from the faces on the website, to how job postings are worded and where they are posted. The council also has more diverse discussion panels which she says welcomes a more diverse interest in design.

“I was keen that when you stepped into the front halls of Design Council that the person that welcomed you reflected the diversity of London,” she adds. “In ten seconds you can sum up what an organisation is like.”

Weir says she is proud of how digital-first the council has become — from working practices to its public-facing platforms such as Twitter — which has proven especially useful during the pandemic as employees are now working remotely.

The physical offices in East London have been adapted for socially-distanced collaboration and Weir says that the future of the council’s work will likely be a mix of remote and in-office collaboration.

In the future, there might even be possibilities for adaptable and “pop-up” offices in different areas of London or in cities like Manchester, as a way of expanding the council’s reach.

Design Council says that the new role is a “significant opportunity to shape the future direction” of the organisation. The closing date for application is 24 October 2020 and the salary is in the region of £100,000 per annum.

The role echoes Weir’s focus on diversity. The council says it is “actively recruiting for a diversity of candidates that reflects the ‘all’ of the society we are designing with and for”.

While proud of the team she has assembled at the council, Weir says “this is the time to reach out to all the talents”. “Let’s not just look at usual suspects,” she adds. If there are people from underrepresented groups or who do not feel as confident to apply for the role, she encourages them to get into contact to have a conversation with her beforehand.

The incoming chief executive will have to guide the council through a time of new challenges realised by the pandemic. Design Council recently published its 2020-2024 strategy, in which it outlined three main areas of “enabling” success over the next four years. This included a focus on sustainability, health and wellbeing as well as design education.

Weir says that a potential candidate could come from one of these fields, and does not necessarily need to have a design-specific background. She points to sectors such as ageing, care homes and homelessness. “COVID has shown that we have to do it differently — there’s no going back.”

Full details on the position are available here.