Think about ocean liners, and the ill-fated Titanic will probably be the first thing that springs to mind. The British passenger liner is most famous for having sunk in the North Atlantic Ocean in 1912, after colliding with an iceberg during its maiden voyage from Southampton to New York City.

Despite the misfortune of the Titanic and the 1,500 plus people who tragically died along with the ship, this period during the 20th century was widely considered at the time – and arguably still today – to be the “golden age of travel”, according to the Victoria and Albert (V&A) Museum. The rise and fall of ocean travel is the subject of the museum’s latest exhibition, Ocean Liners: Speed & Style.

Drawing from the V&A’s own collection and a number of private lenders, the exhibition documents how it revolutionised ocean travel from the mid-19th century to the late 20th century. It begins with Brunel’s steamship, the Great Eastern of 1859 and goes right up to the Queen Elizabeth II of 1969, which brought the era of passenger shipping to an end.

Curated by the V&A in collaboration with the Peabody Essex Museum in Massachusetts, the exhibition covers all aspects of ship design, including engineering, architecture and interiors, as well as the glamorous fashion seen on-board the ships.

Of the more than 250 objects on display, highlights include an archetypal art deco lithograph poster advertising the Empress of Britain, and a Cartier tiara that belonged to the wife of Sir Hugh Montagu Allan of the Canadian Allan Line shipping company, who managed to escape with it from the Lusitana when the boat sunk in a German U-boat torpedo attack off the Irish coast in 1915.

The exhibition has been designed by Casson Mann, who will also be adapting it for V&A Dundee’s inaugural exhibition when the museum opens to the public in September 2018. The consultancy has also worked in collaboration with design studio Lightmap, and theatre maker and designer Netia Jones. 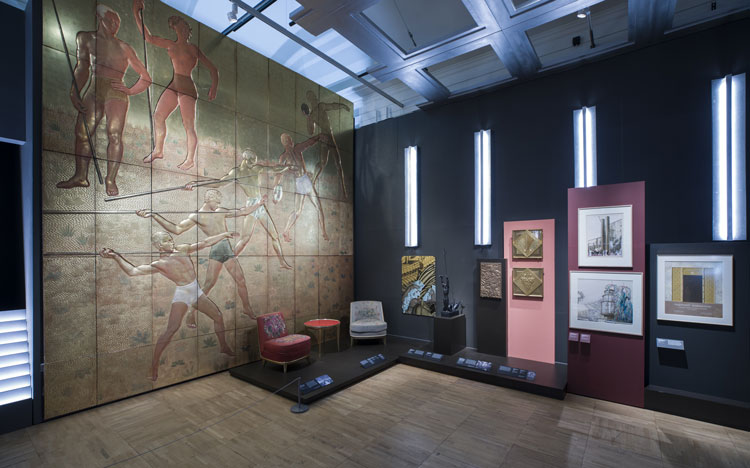 Structured thematically rather than chronologically, the exhibition addresses five key topics: Promoting Liners, Politics of Style, Engineering, Life on Board and the Metaphor of the Liner. Its design is very much focused on the visitor “embarking on a voyage”, says Casson Mann director and project designer, Craig Riley.

The journey starts dockside, with a large-scale installation of the body of a ship and a gangway leading the visitor through to the next room in the gallery. This is followed by a section exploring the ship’s public spaces, below deck in the engine rooms, pool-side up on deck looking out to sea, and finally a glamorous evening under the stars.

The consultancy’s main challenge has been to get across the size of the liners within a relatively small gallery space, says Riley. The consultancy has adopted a number of clever solutions that either make more room, or create the illusion of space. Existing lighting tracks have been removed and higher ceilings have been installed to make use of the full height of the gallery, while mirrored walls recreate the internal symmetry and scale of ships.

The team has also incorporated film and multimedia installations throughout the exhibition. Highlights include a wall-to-wall, panoramic view of the mid-Atlantic Ocean, complete with passing computer generated imagery (CGI) ships, and the “Grande Descente” – a black and white multimedia installation that depicts actors dressed for dinner descending a grand staircase, and uses time-lapse and image layering to create a repeating pattern.

Fittingly, the focal point of the final section – which addresses the ocean liner’s enduring legacy in popular culture – is a wooden panel fragment from the first-class lounge on the Titanic. Later found floating on the surface of the ocean, it is the last remaining fragment from the ship, and has since been immortalised as the object that allows Rose (played by Kate Winslet) to survive in the eponymous film directed by James Cameron, while Jack (Leonardo DiCaprio) is not so fortunate. Surrounded by a projection that mirrors the lapping waves of the ocean, the ornately decorated panel fragment is symbolic of the glamour of the ocean liner, as well as its ultimate demise. 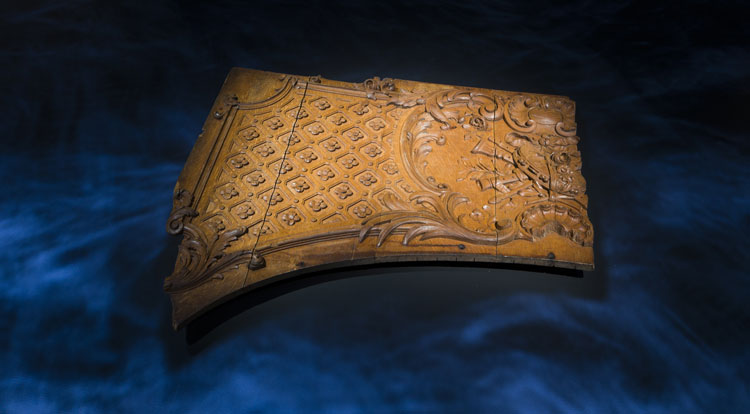 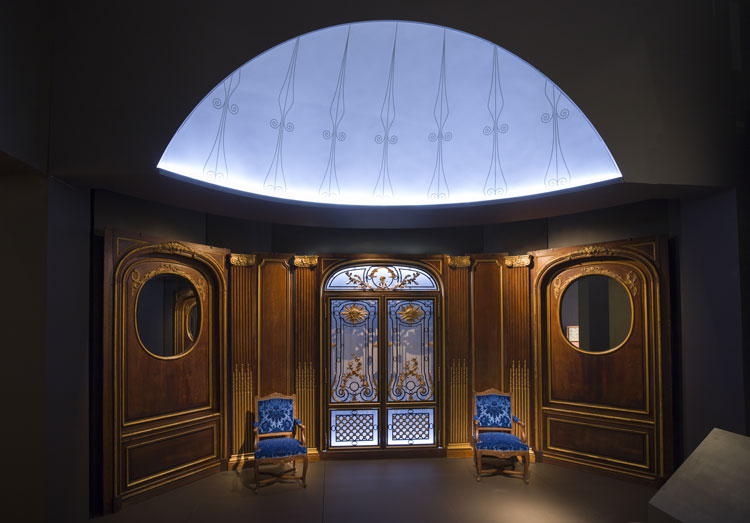 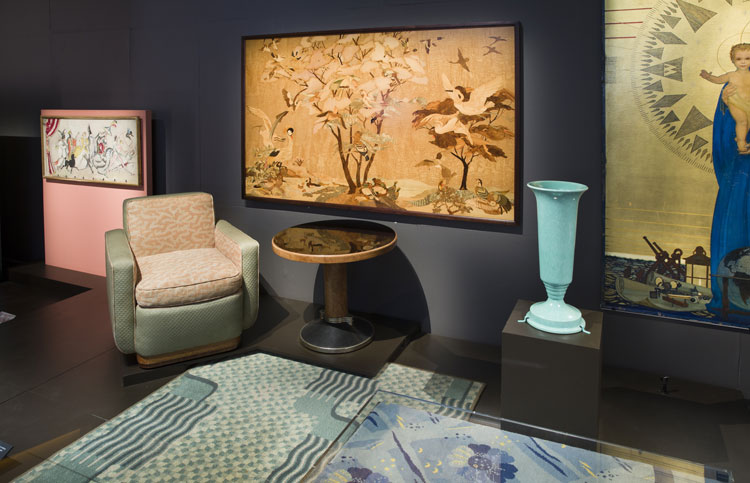 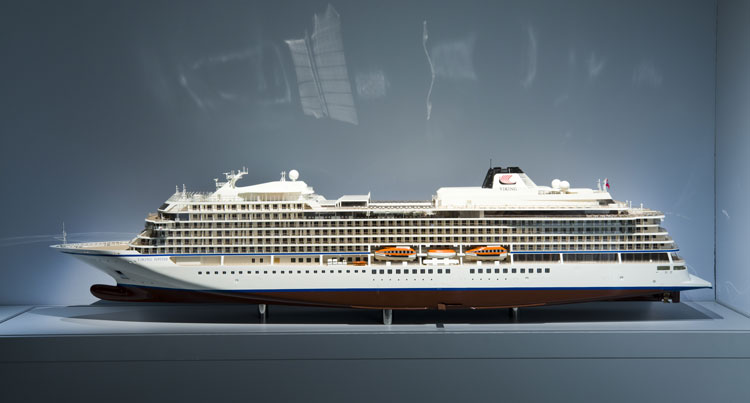 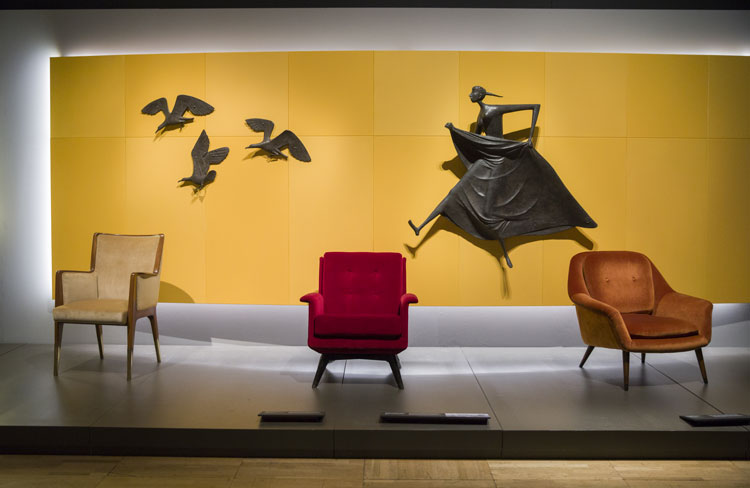 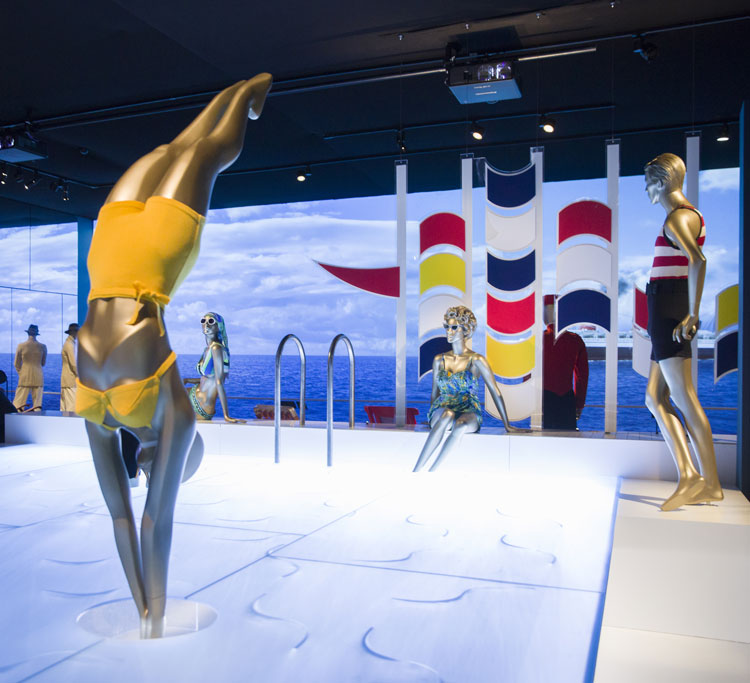 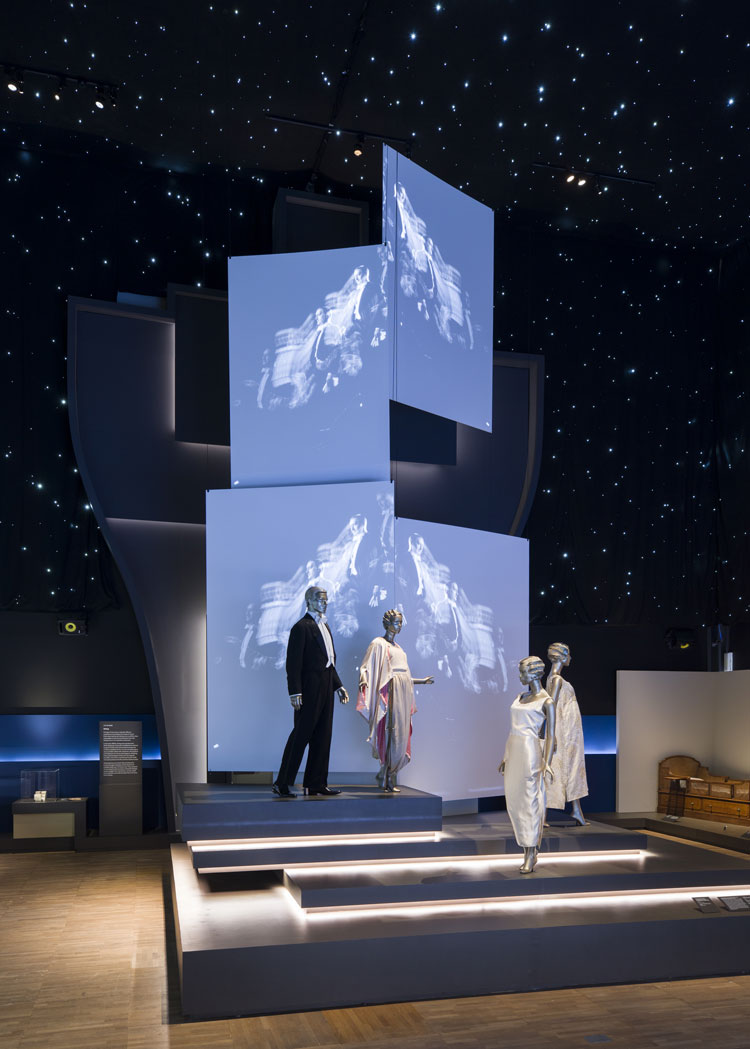 All images © Victoria and Albert Museum, London, unless otherwise specified.