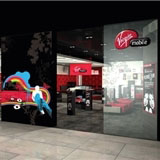 Virgin Mobile is poised to launch its first chain of stand-alone retail outlets, with a branding and interior concept designed by Start Creative and Judge Gill Associates.

The move to launch a dedicated arm of retail stores will follow the long-anticipated merger of NTL with Virgin Mobile, which is expected to be completed by 4 July. The outlets will provide a new platform from which to retail Virgin’s entertainment services and products.

Virgin Mobile is understood to be planning to launch up to 50 stores initially, the first of which will open on 29 July at the Lakeside shopping centre in Thurrock. Three Virgin Mobile retail outlets will open before Christmas, confirms Richard Chainey, retail operations controller at Virgin Mobile. Further stores could be on the cards if NTL and Virgin Mobile buy up stores from The Link, following its £30m sale to 02.

The outlets will be positioned more as entertainment centres, retailing an array of non-Virgin branded items and a broad range of products associated with a mobile lifestyle. There is the potential to integrate music and game download facilities into the stores, as well as to introduce a café zone, says Chainey.

‘This is a natural evolution for us at this point and has been on our agenda for a while. We have very strong views that the retail concept should be more than a standard mobile store,’ he adds.

The Virgin Mobile launch store has been designed to encourage browsing and will feature a defined Pre-Pay and Pay Monthly area, as well as a more intimate contract-signing area for Virgin customers.

Separately, Vodafone is preparing to roll out a fresh store design across its high street portfolio with a concept developed by Fitch, featuring the reworked branding identity by Enterprise IG.