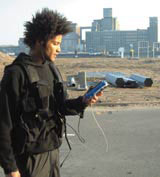 Blast Theory is an arts group that is working with interactive digital media in an exciting, investigative way. Interaction designers take note, as the work it produces mixes audience participation, interaction design, the use of the latest digital communication technology including webcams, GPS and GPRS location devices and unusually, collaborative evaluation to research and quantify the outcome of its projects. All classic interactive design processes.

But this isn’t strictly a design group. Blast Theory plays games with people’s behaviour and its interactive games do just that, games that audiences can play and are hybrids of art-based performances. The Desert Rain project in 2000 was a virtual gameplay based on a Gulf War scenario that urged players to shoot virtual targets at a screen displayed on a sheet of water. Real people then stepped through the water, jarring the senses of those shooting without thought.

The latest project, Uncle Roy All Around You, created with long-time collaborator Mixed Reality Lab and currently showing at the ICA in London, is its biggest, most challenging game to date. Audiences can participate in two ways, either on-line or as street players. While on-line players cruise through an Internet virtual cityscape, street players are out in the real streets of Westminster. The on-line players have to work together to locate and ‘knock out’ street players who themselves need to locate and reveal their identities to Uncle Roy at some hidden, but real rendezvous. Anyone can sign up to play either as an on-line or street player. Players use webcam, GPRS location-based devices and PDAs, as well as the on-line virtual world, with each game being played over 60 minutes.

This seems to be fabulous post-Internet technological and interactive performance, which uses gaming and network gaming culture, as well as tapping into the personal communications culture of mobile phones and messaging. It’s like a PlayStation game where the virtual characters and locations are simultaneously real. Blast Theory calls it ‘mixed reality’.

With such a hybrid interpretation of art and performance, it’s no surprise that the three founding members themselves have diverse backgrounds in acting, literature and art in social contexts. Matt Adams, Ju Row Farr and Nicholas Tandavanitj have been working as Blast Theory producing mixed reality projects since 1991. ‘Our interest in interaction was initiated through how theatre and live performance could be reinvented in the face of the electronic era,’ says Adams. Interaction was considered as a social and theatrical interest as technology wasn’t really there to support its ideas. ‘The solutions we had were originally low-tech or no-tech. We gradually realised that technology would be a good tool to assist us,’ he says.

One of the cornerstones of Blast Theory’s creative process is collaboration. In 1994 it hooked up with three graduates from the Computer Related Design Course course at the Royal College of Art. The critical moment was meeting Steve Benford, professor of the Mixed Reality Lab, University of Nottingham, in 1997. ‘We initiated a collaboration and have been working with the lab continuously,’ says Adams.

The lab is an interdisciplinary team of 30 researchers, including programmers, interface designers and psychologists. ‘They study the outcomes of the projects in detail,’ muses Adams. ‘How the interaction is created, how it unfolds. A lot of interesting research has come out of that partnership. I think we are one of the most well established art and science collaborations around.’

‘In a collaborative process, ideas are developed and worked through,’ says Adams. ‘How are you able to gain enough facility with technology that it becomes a creative tool rather than an end in itself? I think there is a strong analogy with cinema, a technical artform that relies on people with incredible technical understanding of how film operates, although interaction technology is constantly changing, so it’s very hard to get the same facility and fluency with the technology we’re using.’

Meanwhile, Blast Theory is hoping to sign up game-players for Uncle Roy – and seems genuinely excited by the potential outcome.

Uncle Roy All Around You shows at the ICA, The Mall, London SW1 from 28 May-7 June