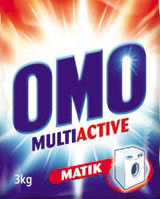 The rebranding is part of Unilever’s policy of reducing its 1600 brand identities across the world to 400 by 2005.

Enterprise IG managing creative director Peter Hollingsworth says the group’s main challenge was to ‘establish a strong, central image’ for the brand that was recognisable across the world, but adaptable enough to respond to regional requirements.

‘We found that although Omo had a recognisable trademark – a starburst symbol – it varied hugely from a dynamic outward burst to something that appeared to have been thrown against the box,’ Hollingsworth says.

‘We have taken the strongest features – the outward dynamic image, with a 3D-effect typeface, and refined it to the point where it is easily adapted to local sensibilities,’ he adds.

Enterprise IG was originally appointed to create packaging for the Brazilian, South East Asian, South African and Turkish markets, but its remit has now been extended and the work is currently being rolled out across 42 countries.

The consultancy was appointed on the strength of its previous relationship with Unilever. It had already completed re-branding and harmonising for the company’s Slim Fast and Sun Silk shampoo brands across the EU.

Unilever global brand director David Arkwright says the group’s international reach was also a decisive factor in its appointment. ‘In the past some smaller design groups found it awkward adapting to the global market,’ he says.