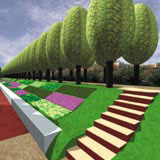 Glasgow’s Hidden Garden opens next month, the culmination of a two-year project by City Design Co-operative, in collaboration with the NVA arts organisation and independent artists.

Incorporating both the site’s history and the wishes of local residents, the £1.5m scheme has regenerated an inner city brownfield site with a design that references the land’s former uses as a nursery, tram factory and, further back, its original woodland state.

Central to the garden is a freestanding 30m chimney, with lighting design by Speirs & Associates, and scattered around the grounds are original, site-specific artworks by Stephen Skrynka, Julie Brooks and Alec Finlay, among others.

According to City Design Co-operative director Chris Rankin, each element of the garden ‘forms an integral part of the overall scheme’.

‘Each part has evolved as the project has advanced, all within NVA’s overall brief of paradise gardens through history and of creating a peaceful retreat for the local community,’ says Rankin.

The Hidden Garden will be open 10am-8pm, Tuesday to Sunday from 24 June.