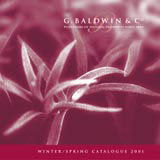 Fuse has given London’s oldest herbal supplier its first corporate identity revamp for 157 years, which launches this week.

G Baldwin & Co is a herbalist and health food specialist that has been trading from the Walworth Road since 1844. It supplies medicinal herbs, alternative medicine and branded and own-label aromatherapy products worldwide. Its customers range from local pensioners to multinational hotels.

The design challenge, says Fuse founder Jeff Della Mura, who art directed the identity, was how to update a brand so old ‘without losing the plot’. Della Mura says, ‘Initially the client was very nervous given the heritage that is at stake.’

The brief called for an identity that would work across graphic, packaging, retail and Internet, and that could be truncated from ‘the full branding with strapline to its signature footprint “B”.’

The new look is designed to be modern but timeless, he adds.

Its first appearance will be on G Baldwin’s winter catalogue, which is due to be distributed at the end of this week. It will then be applied to stationery, the website, www.baldwins.co.uk, product labelling and signage.

The consultancy won the project via an unpaid creative pitch against two rivals in the spring. The design portion of the total £500 000 overhaul budget is £20 000.

The designer was Clare Parker.