The Design Museum’s new exhibition exploring the life and visual stylings of Amy Winehouse hopes to provide an “intimate connection” with the late singer and her creative process.

Amy: Beyond the Stage tracks Winehouse’s career and public image from her childhood across two albums, Frank and Back to Black, examining both her eclectic musical influences and relationship with fashion. 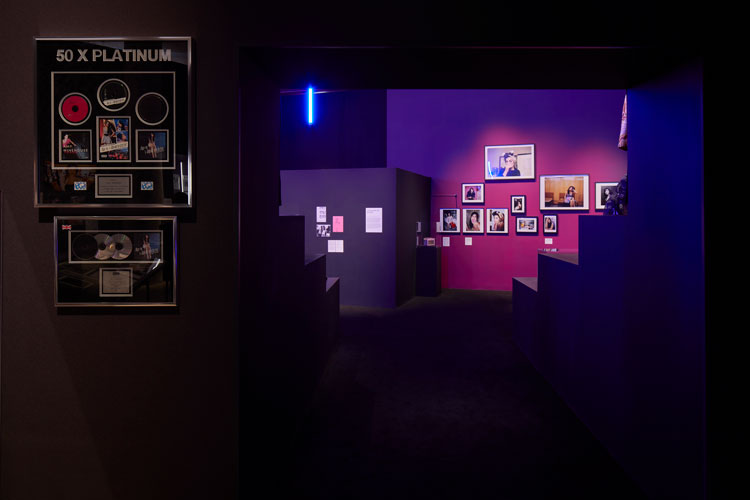 The display is diverse, suggestive of Winehouse’s genre-defying attitude. Among the collection are childhood diary entries where a young Winehouse outlines her ambitions for fame, and a display of dresses worn to high-profile events (from designers including Roberto Cavalli and John Galliano).

The “amazing moment of magic” at the heart of Winehouse’s singing and song writing has inspired two immersive installations at the exhibition, created by London-based set designer Chiara Stephenson.

All Things Studio, also based in London, is responsible for the 3D design, which includes a curtain-draped bedroom-like space to display objects from Winehouse’s youth at the show’s start.

Stephenson’s first installation is a recording booth set-up, which follows an in-depth showcase of Winehouse’s influences, writing process and incessant hounding by the media. The set piece is a chance to hear from Winehouse herself and experience the singer’s “rare candour”, according to Stephenson. 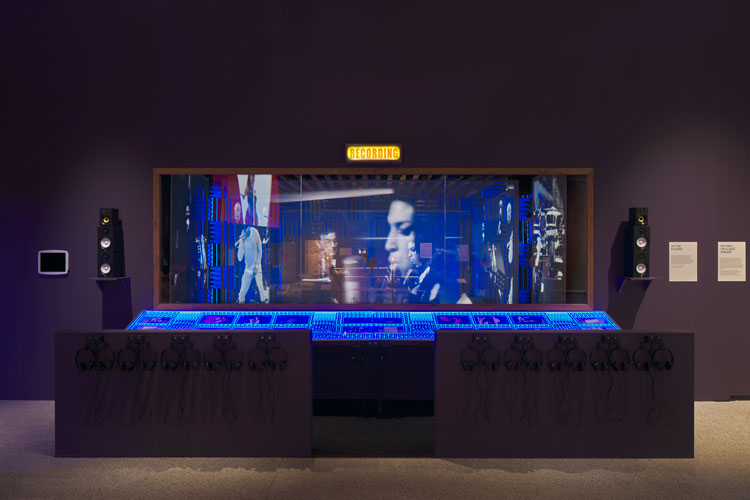 Visitors can take a seat in front of the glass window as though they are listening in on a recording session. The space is inspired by London’s Metropolis Studios where Winehouse’s second album Back to Black was recorded. “What we ask visitors to do is to put headphones on and sit and just take a moment – or maybe even several minutes – to just absorb and really connect,” Stephenson says.

What they will be connecting to is an audiovisual “projection sculpture” comprising Winehouse’s own words, archival footage and a series of handwritten lyrics. The video installation was designed in collaboration with Luke Halls studio.

While composing the video, Stephenson says the key was to listen to Winehouse’s voice – both speaking and singing – so that she was the narrator. “We responded visually to what she was saying,” the designer explains. Visitors can hear Winehouse talking about her wide range of musical influences, and how she hoped to honour them. 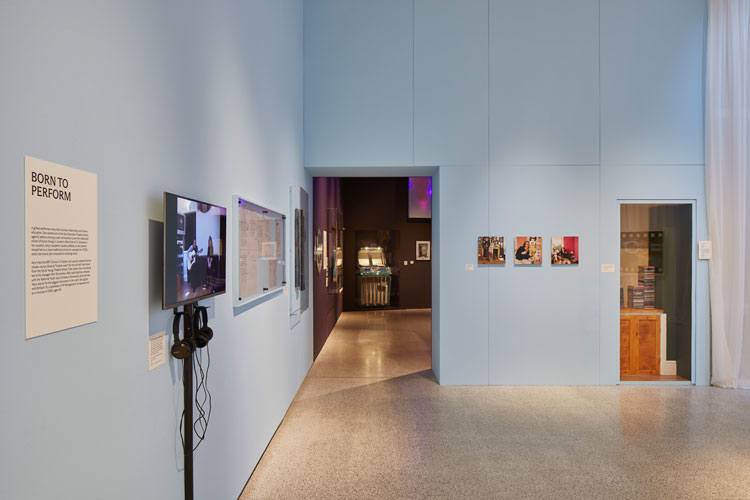 While Stephenson believes that the installation offers an “intimate connection” with Winehouse and her creative process, there is still a distance with the singer. At one point, Stephenson did consider taking visitors on the other side of the glass. “But it felt special to hold that space in a sacred way,” she adds. “This was Amy’s environment, not ours, though we’re allowed to have insight into it.”

Instead, a lone microphone has been placed in the space – a suggestion that “Amy’s just left the room”, Stephenson says. There’s also a light bulb, in part inspired by an album cover of one of Winehouse’s favourite artists Sarah Vaughan. On the American singer’s 1958 album Sarah Vaughan sings George Gershwin, she sits next to a single light bulb.

Stephenson’s second design is the exhibition’s finale: an immersive experience inspired by signature Winehouse track, Tears Dry on Their Own.

The designer was keen to end the exhibition on a positive note, and it was the breakup song that jumped out for its “defiant and uplifting tone” despite its rather downbeat theme. Stephenson also wanted the space to “reimagine” tropes associated with Winehouse’s live performances, like her trademark lampshades and draped swag-style curtains. 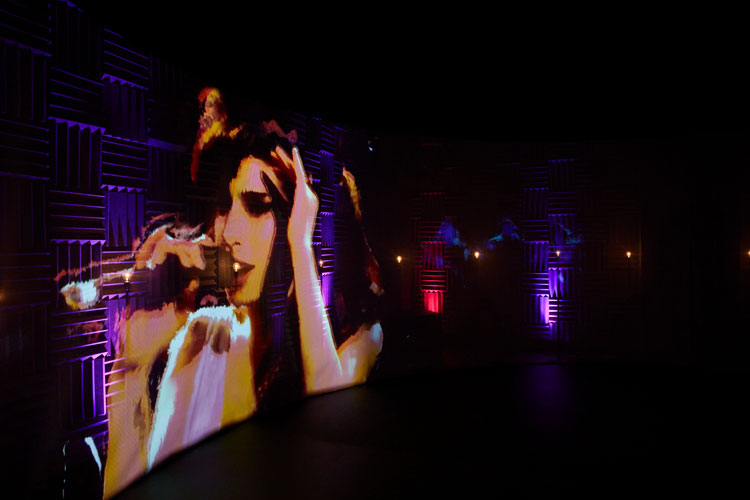 Visitors enter the mirrored semi-circle space where an “illustrative” video of Winehouse, created by Studio Moross, is projected onto gauze.

The visuals have been rendered in a “very illustrative, more expressionistic way”, Stephenson says; Amy’s figure is animated with swirling patterns reminiscent of an oil painting. The colourful artwork moves constantly across the gauze, reflecting the song’s pace as it builds towards its bridge.

As Winehouse’s recognisable silhouette moves across the gauze, a live version of Tears Dry on Their Own recorded at London’s Shepherd’s Bush Empire plays. Before she starts singing, you hear Winehouse’s speaking voice.

“You’re in this dark environment, listening to her voice, and it really feels like she’s in the room with you,” Stephenson says. “And then we begin the show.” 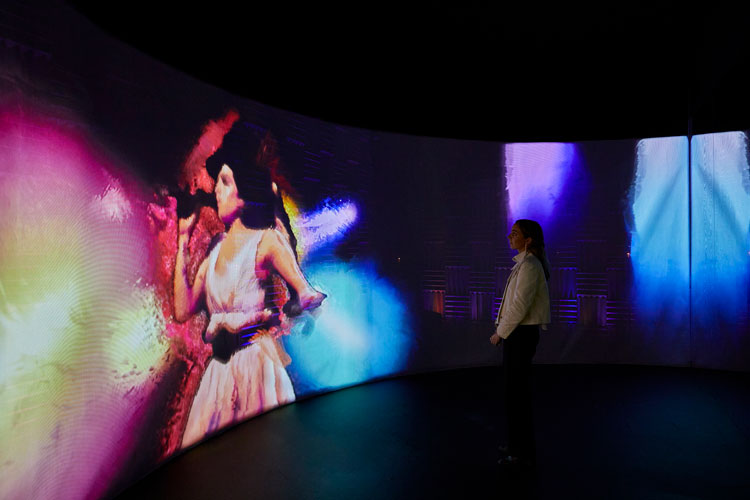 The space itself has been inspired by real-life venue Joe’s Pub, chosen because it was Winehouse’s performance here that “really broke America”, explains Stephenson. It was at the New York bar that stars like Jay-Z came to see Winehouse’s stateside debut.

Stephenson describes the real-world inspiration as a basement jazz bar, and in the exhibition, the recording booth’s light bulb is repeated in front of a patterned foam acoustic panelling. She adds: “It felt really lovely and right to bring that texture from that famous night which really shifted her career.”

“A closer connection with Amy”

This is the Design Museum’s first exhibition based on a single musical artist and one of the first major retrospectives on Winehouse at all. Given her outsized influence, it will probably not be the last – grappling with the star’s complicated legacy.

As far as design’s role in bringing Winehouse’s creativity to life though, Stephenson is clear: “If a visitor leaves feeling like they’ve had a closer connection with Amy as an artist and had insight into her character, then we’ve done our job.”

Amy: Beyond the Stage is now open at the Design Museum. For more information on tickets and timings, you can visit the museum’s website.