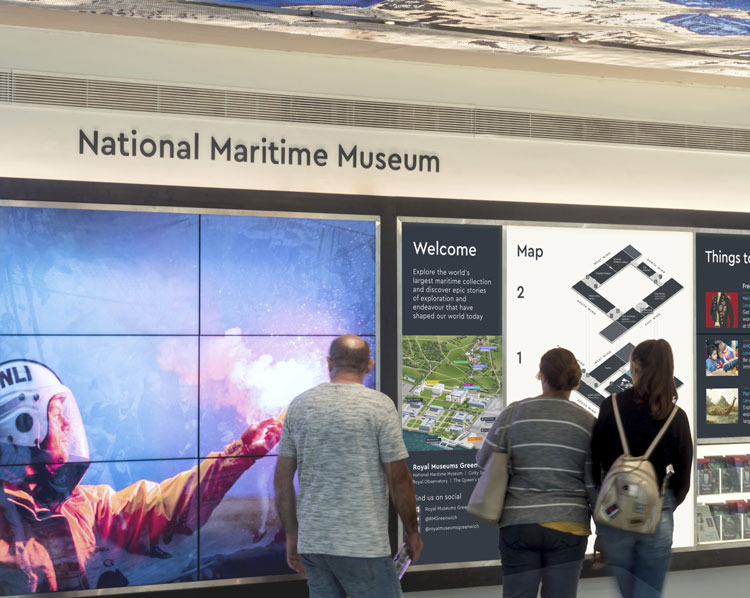 A wayfinding system that aims to encourage exploration has been created for the National Maritime Museum in Greenwich, London, by CCD Design and Ergonomics.

CCD took on the project for parent company, The Royal Museums Greenwich, to design a whole new wayfinding system for the museum and connect the newly opened wing.

“We wanted it to work, first and foremost,” says Darren Clarke, senior wayfinding designer at CCD. “We wanted the wayfinding system to promote access to all the galleries and to be engaging and accessible.” 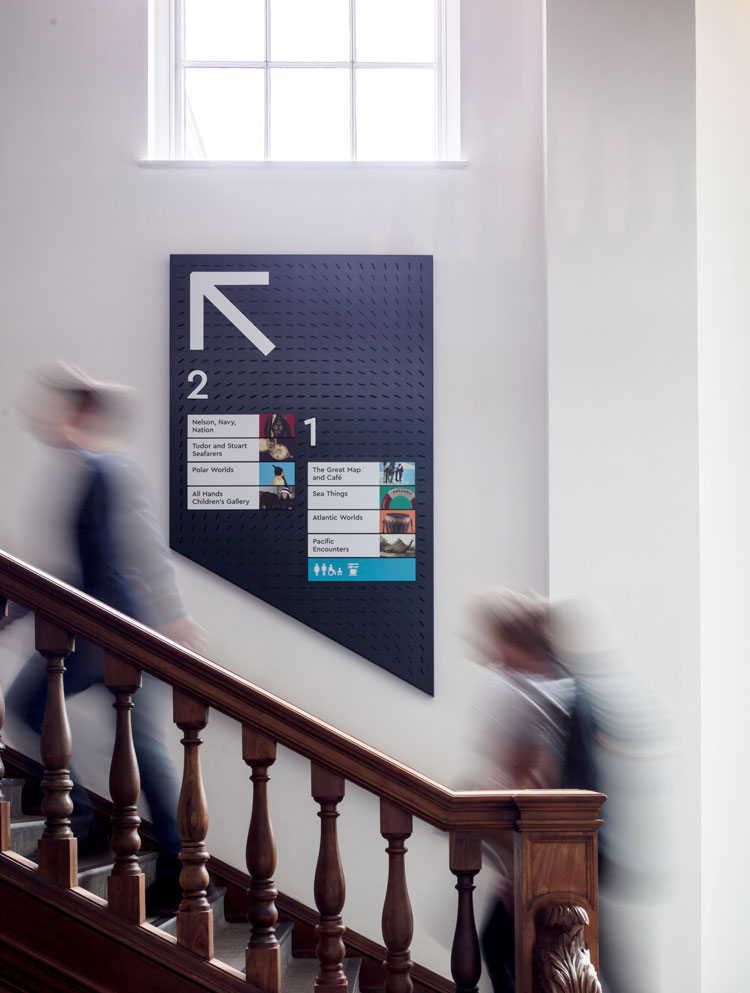 “To help do that we used photography from the galleries, which was a slightly novel approach for wayfinding as it’s usually text-based or pictograms. We used imagery to help entice people to discover more.”

He explains that a lot of people were previously staying on the ground floor and missing parts of the museum, which has three floors. The new system aims to help people explore all levels.

“We realised a lot of people go to a museum and ask for specific galleries or pieces of art or parts of the collection, for example Admiral Nelson’s coat, which has a little bullet hole in the shoulder.”

The new signage directs people to certain highlights and featured galleries, and from there further signs help them explore more of the museum and discover more things to see and do, as well as encouraging them to go to the upper levels. 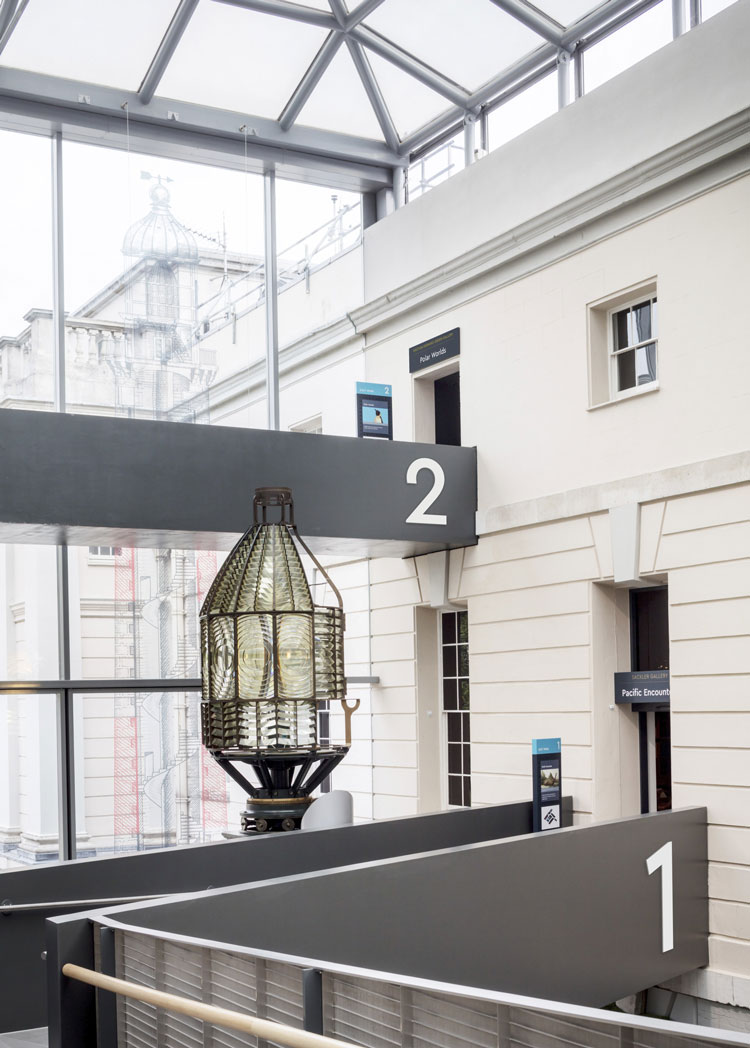 CCD made signs out of laser-cut aluminium, in a battleship grey to match the museum’s colour, featuring a bespoke nautical-themed pattern “inspired by movement through water and windspeed maps”, Clarke says.

The pattern doubles as a pinboard mechanism with wayfinding panels attached – these are white, with “highly legible”, “bold” text, and feature imagery from around the gallery.

“The whole system is flexible which was a big requirement for the museum,” says Clarke. “It was important for them to be able to make quick and easy updates as exhibitions change.”

Facilities such as toilets and cafés have also been made clearer on the signs and a new museum map has been created by the studio.

CCD has also split the gallery into zones, with a north, east, south and west wing, also following the nautical theme and making it easier for people to find specific galleries. 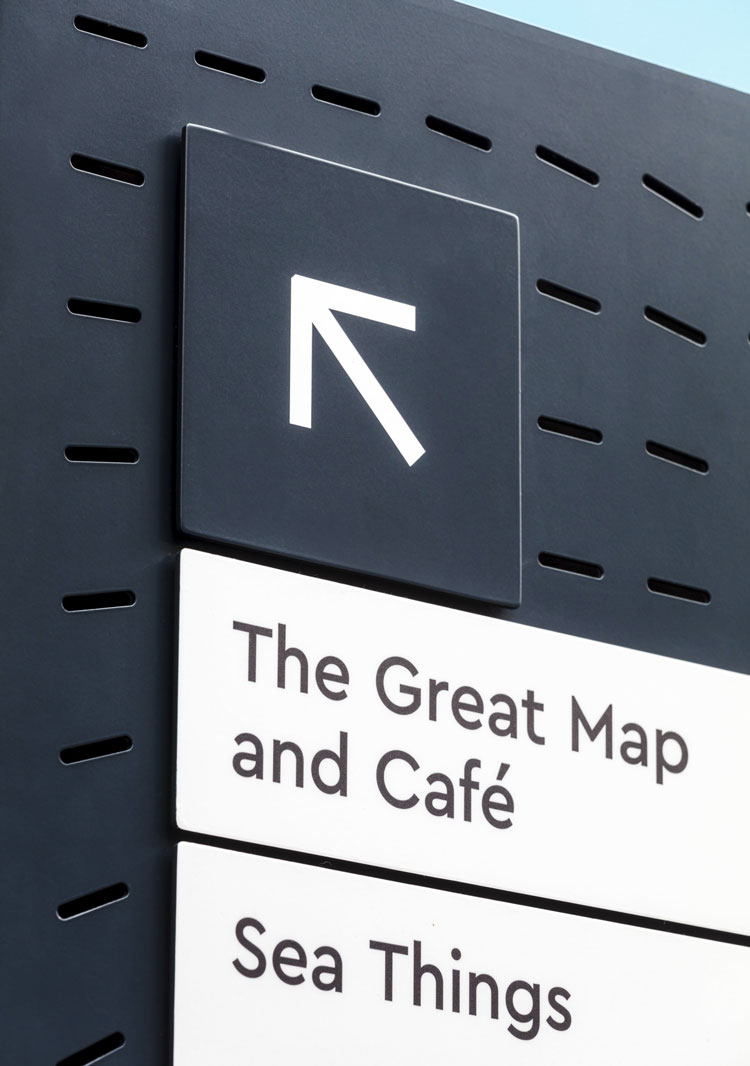 At the centre of the museum’s courtyard area is a large world map known as the Great Map, which Clarke describes as the “heart of the museum”. This is not a new addition.

Clarke says that the new zones based on compass directions are not just for wayfinding but also for educational purposes. “If you stand on the Great Map you can look around and see where north and south is,” he says. “It helps kids to understand a bit more.”

The previous wayfinding system featured “a long list of all the galleries”, but Clarke says, “through our research we found people started to look and give up very quickly as it wasn’t visually interesting. None of the names of the galleries explained a lot so people just carried on walking.”

Now, while starting at the Great Map may provide the most wayfinding options in terms of where to go next, Clarke says the new system is “not providing a prescribed route” as they want to “encourage exploration”. 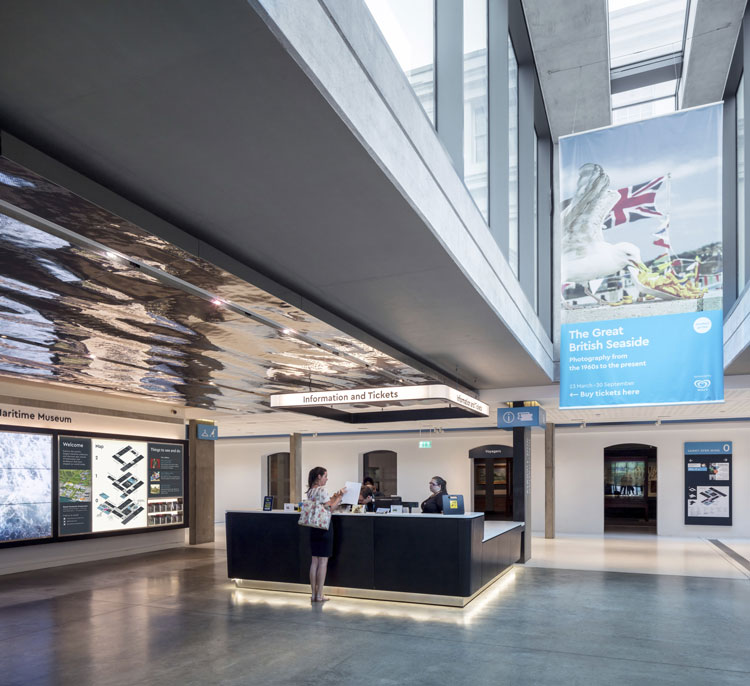 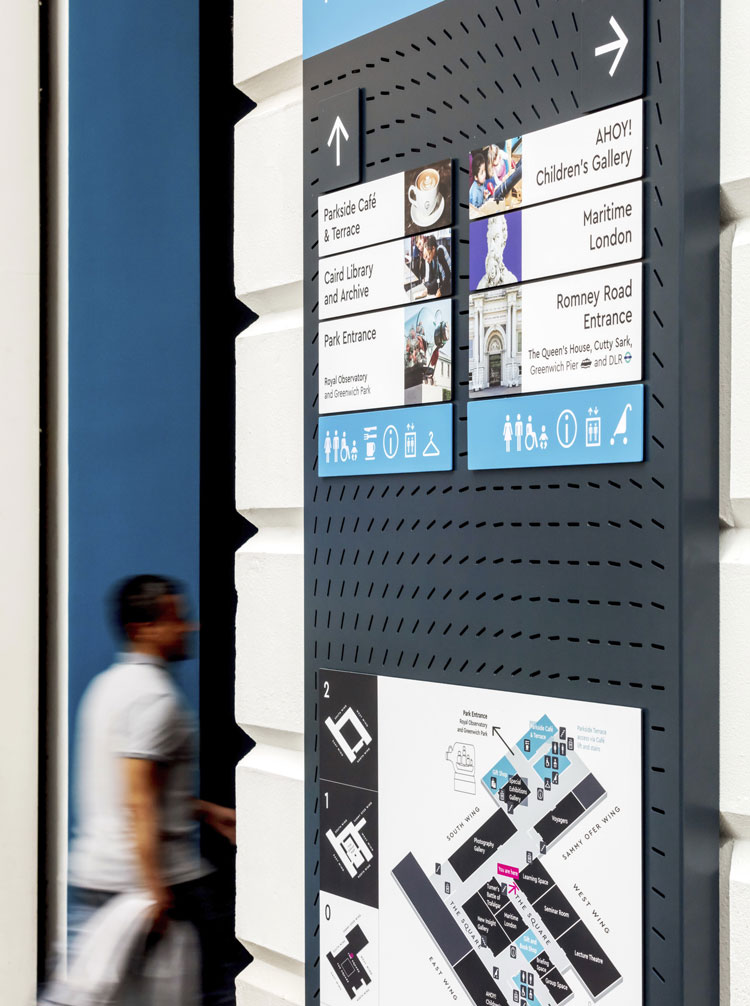 Design for Children: how to create great products and toys for kids